Walker Making Most of Her UVA Experience

CHARLOTTESVILLE –– She’s a big-time leaper who stands 6-foot-3, and she could have been an outstanding basketball player. Alana Walker chose to follow another path. Had she stuck with hoops, she knew, her athletic identity would have been entwined with that of her father, former NBA star Antoine Walker.

“I knew I wanted to pick my own sport and become good at it,” Walker said. “I ran track till my sophomore year of high school, and I really love track, but then I had to choose, because it was just too much to handle both, and I chose volleyball.”

For that, Shannon Wells is grateful. This is Wells’ first season as the University of Virginia’s head volleyball coach, and Walker joined her program as a graduate transfer in late June.

The Cavaliers’ coaching staff knew that Walker, who recorded 741 career kills for Northwestern, was an exceptional middle blocker. “I just don’t know if we were sure what kind of teammate we were going to get,” Wells said, “and what kind of relationships she was going to be able to build, being on Grounds for only three weeks before our first practice.”

They need not have worried.

“Alana instantly connected with our team,” Wells said. “She’s an amazing teammate. They respect her a ton, and her voice is loud and her voice is heard. I feel like she’s kind of an extension of the volleyball staff. I just feel really lucky that we found someone that was committed to building something and has gone through that experience.”

“I feel like I walk out of the locker room and the first thing I hear is Alana going, ‘Hey, let’s talk about that. The staff’s right, and we need to do this.’ I think it’s so much better coming from a player’s perspective and a player’s voice, so I’m just excited that she’s part of our program.”

Heading into UVA’s weekend matches against Virginia Tech and Wake Forest, both at Memorial Gym, Walker leads the ACC and ranks third nationally in blocks per set (1.59). She ranks first in the ACC and fifth nationally in total blocks (111).

“If I could get that kid for another year, I would give up a lot,” Wells said.

💪 Alana Walker delivers her fifth block of the match to put us up 19-18 in the third!

Alas, this is the final college season for Walker, who’s in a master’s program in UVA’s School of Education and Human Development. She’ll head back to her hometown of Chicago at the end of the 2021-22 academic year. Her classes are all online, and she could leave after this semester, “but I love being with the team in Charlottesville,” Walker said. “Shannon offered to let me practice if I want to in the spring, and I just can’t leave yet.”

Her immediate focus is on helping the Wahoos (8-12 overall, 1-9 ACC), who have played a grueling schedule, return to their winning ways. UVA has lost eight consecutive matches, but its remaining opponents, including Virginia Tech (9-13, 0-10) and Wake (11-0, 2-8), don’t appear as formidable as the teams in the ACC’s top tier.

Wells said her players continue to practice and play hard.

“I know the wins aren’t there, but when I look out and see the style of volleyball that we’re playing and see the culture that we have, I can see improvement,” Wells said. “That’s why I hope over the next four weeks these kids can get some wins, because they’re working. You can’t tell in our gym that we’re on a losing streak. They just don’t approach volleyball like that. They came in with excitement and ready to learn, so I hope they finally get some tangible rewards out of that.”

The Hoos’ Friday night match against the Hokies is part of the Commonwealth Clash. Walker is well-versed in Northwestern’s rivalry with Illinois. She’s not as familiar with the UVA-Tech series, but she’s eager to be part of it. 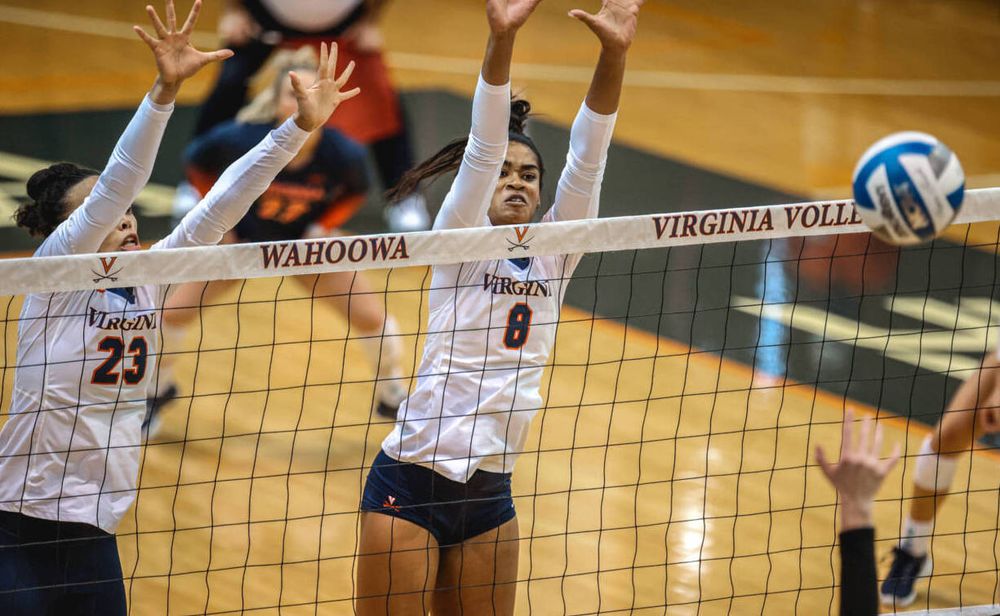 Wells came to UVA in late April from the University of Florida, where she was associate head coach. The Cavaliers had no scholarships left for this season when Wells was hired, but when one became available, she remembered that Walker had entered the transfer portal.

Numerous schools had expressed interest in Walker, but she didn’t connect with their coaches. With Wells, it was different. Their first conversation, on the phone, lasted more than an hour.

“It wasn’t even about volleyball,” Walker said. “It was about me and what I wanted to do after volleyball, because she was asking me about my interests, and we talked a lot about my family. I’m a really family-oriented person. She was just really genuine.”

Walker had been part of a rebuilding process at Northwestern, and Wells talked to her about helping lay a foundation for the UVA program’s future success. The opportunity to “be a part of something bigger than just being here for a year” appealed to Walker.

To Wells, Walker was a perfect fit at UVA. Not only was she a talented player, Wells said, “her personality meshed with mine really well, [as did] her vision for what she wanted in her next team. And so I left the call really excited, talking about the next steps of getting her and her family on a visit.”

Walker committed without visiting Charlottesville. When she arrived on Grounds during the summer, Walker did not immediately try to assert herself as a leader, even if Wells might have wanted her to.

“I didn’t know anyone [on the team],” Walker said, “and I was like, ‘I’m going to be pretty quiet and just see how things go.’ I think that’s how I was over the summer, and I really just started building relationships and building trust and respect from everyone else. So then when the season started, with me being most experienced person on the team, I think the leadership just kind of came quickly.”

She laughed. “That’s just the player I am. I’m loud and energetic.” 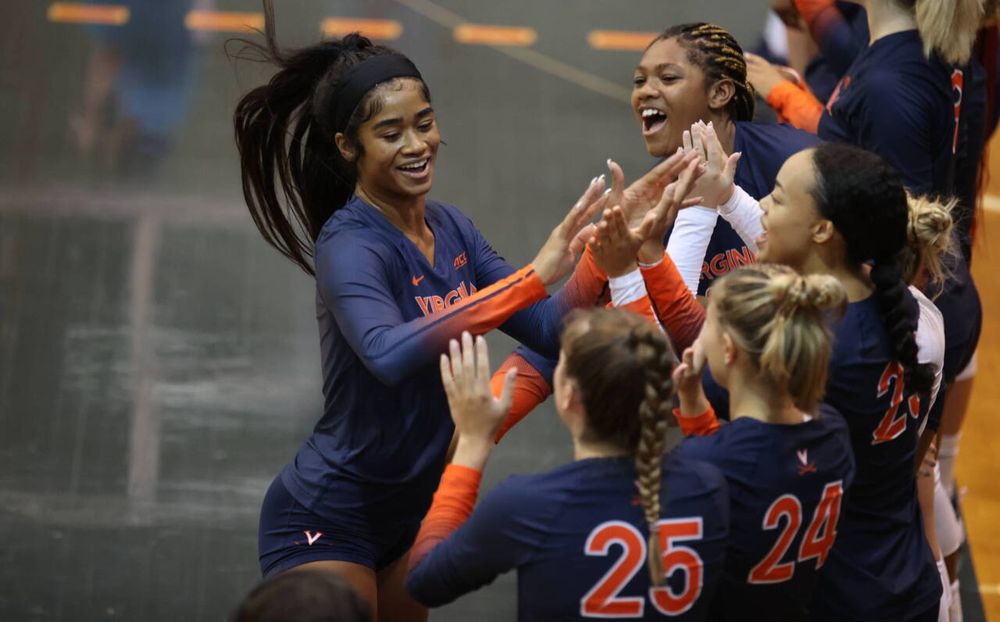 Walker, who signed a Name, Image and Likeness deal with Barstool Sports early in the summer, has a huge presence on social media, with 12,500 followers on Twitter, 193,000 followers on Instagram and 206,000 followers on TikTok. She’s long modeled, and photos Walker posted of herself went viral during her freshman year at Northwestern.

After that, Walker said, “I started posting consistently, and I had photos and content to put out, and then I went viral a couple more times. I went viral two or three times on Tik Tok, and that’s pretty much it. I just was consistent with it. I enjoy it.”

A pro volleyball career could be an option for Walker, but she’s not likely to pursue that immediately after she finishes up at Virginia.

“I don’t know if that’s something that I really want to do, because I have a lot of other goals and dreams, and I kind of always put them on the backburner for volleyball,” Walker said. “So I think I’m going to test it out by not playing volleyball.”

Walker said plans to sign with a talent agency and become a full-time influencer on social media. “And then I want to start my own non-profit for girls on the south side of Chicago to play volleyball,” she said. “I wouldn’t be here if I didn’t play volleyball and if people didn’t invest time into me, because I wasn’t good when I first started. But people did invest in me, and I just want to put that into someone else.”

She and her family are “very much city people,” Walker said, and she never expected to find herself in a Southern college town. But after spending most of her life in the Chicago area, she wanted a different experience as a graduate student, and she’s fallen for Charlottesville.

“The girls and I, we always hang out on off days, and they show me around,” Walker said. “My mom and I try to go to different restaurants and see different things. I’m just trying to take in as much as I can here.”