WASHINGTON, D.C. –– The buses carrying the University of Virginia men’s lacrosse team pulled away from Audi Field early Saturday evening, and the ride back to Charlottesville gave players and coaches ample time to ponder the program’s first setback since last April.

It felt “like a playoff atmosphere, with a neutral site and over 10,000 people,” UVA head coach Lars Tiffany said. “This was great for the game of lacrosse.”

The highly anticipated rematch, however, didn’t live up to expectations. Top-ranked Maryland never trailed in a 23-12 victory over No. 2 Virginia in the marquee game of the inaugural Capitol Classic Lacrosse tripleheader.

🥍🎥 Highlights from today's matchup vs. No. 1 Maryland at Audi Field.

For now, at least, it’s clear which team deserves the top spot in the polls.

“Tremendous effort by the Terrapins,” Tiffany said. “And they certainly exposed a lot of things we need to work on. We talk about often, as a team, [how] it’s easier to learn from losses than wins. But we’ve been trying to learn from the victories, and we have improved, but [Maryland head coach] John Tillman and his crew did a fantastic job preparing their men and then they made incredible plays over and over and over again. And so we’ve got a lot to learn.”

Not since 1978, when the Wahoos lost 24-19 to ACC rival NC State, had they given up so many goals in a game. Last season, though, Virginia lost 20-10 to Syracuse at the Carrier Dome. However humbling that defeat might have been for the Hoos, it didn’t derail their season. They rebounded to win their second straight NCAA championship.

There’s a lot of season left for Virginia (6-1), whose average margin of victory in its first six game was 7.3 goals. Still, the reality is that the Cavaliers were outplayed in virtually every phase of the game Saturday.

“Like Coach said, it’s easier to learn from loss than it is from a win,” attackman Matt Moore said, “but this is a really, really bad loss for us, and we’re forced to learn from this one.”

Moore, a fifth-year senior, contributed three goals and two assists for UVA, as did redshirt sophomore attackman Connor Shellenberger, and freshman goalkeeper Matthew Nunes made 14 saves on a day when Maryland shooters had plenty of room to operate.

The Terps move the ball exceptionally well, Tiffany noted, with the result being that Nunes often found himself “facing a guy with his hands free, as opposed to a contested dodger, and he saw too many of those shots.” 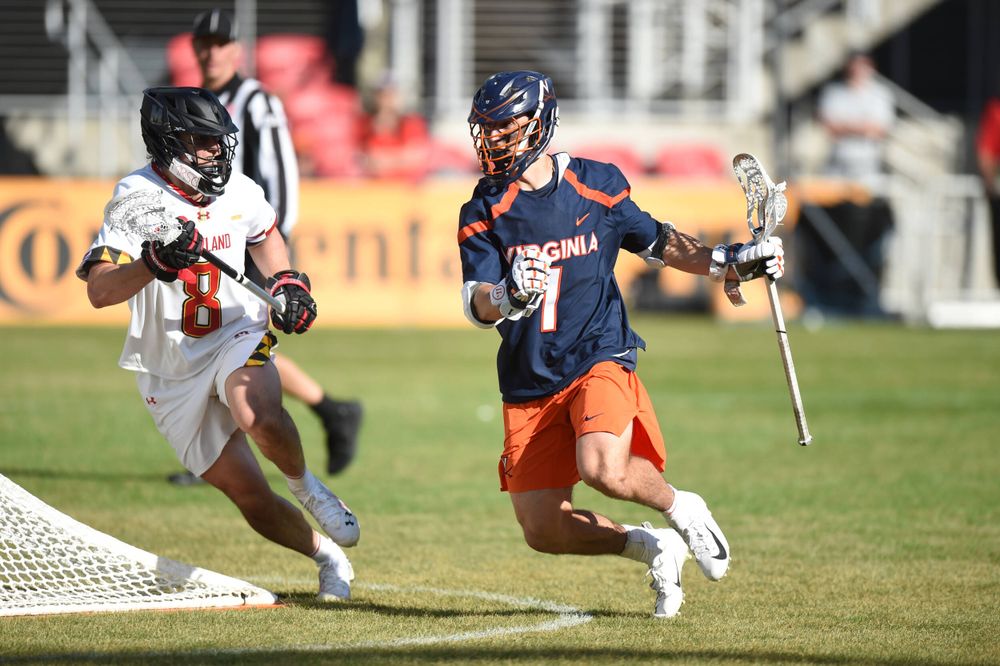 “When you have Petey LaSalla and Gable Braun,” Tiffany said, “you don’t anticipate losing two-thirds of the faceoffs. But Luke Wierman, he showed us today that he’s improved tremendously as he’s grown older at Maryland. He’s learned from great coaching. What a dominant performance he put out there. It felt more than two-thirds, didn’t it? Looking at the stats. I thought it’d be more than that, about 75 percent. But we’re spoiled often by Petey and Gable and our faceoff wings. But if it wasn’t Wierman winning himself, his wings were coming in and scooping up [the ball] and getting those extra possessions. That was that had a lot to do with why Maryland was able build the lead, maintain the lead. If we got a couple goals, they’d stymie it because of the possession.”

In each of the past two NCAA tournaments (2019 and 2021), Maryland’s season had ended with a loss to Virginia. Heading into the game at Audi Field, Tillman reminded his his players, who wanted revenge, not to lose their discipline.

“I was not going to BS them,” Tillman said. “They know who they lost to last year. They knew they were playing the two-time defending champions. You’ve got to get excited about that. That’s why a lot of these guys came here: to play in this kind of games. I like what Lars Tiffany said earlier in the week: ‘This game is a measuring stick, it lets us know where we are right now.’ ”

Early in the fourth quarter, Shellenberger passed to Moore for a goal that made it 15-11, and a close finish seemed possible. But the Terps responded with two unassisted goals, the second one a 60-yarder by defenseman Matt Rahil into an open net with 9:17 remaining.

“Those were daggers,” Tiffany said. 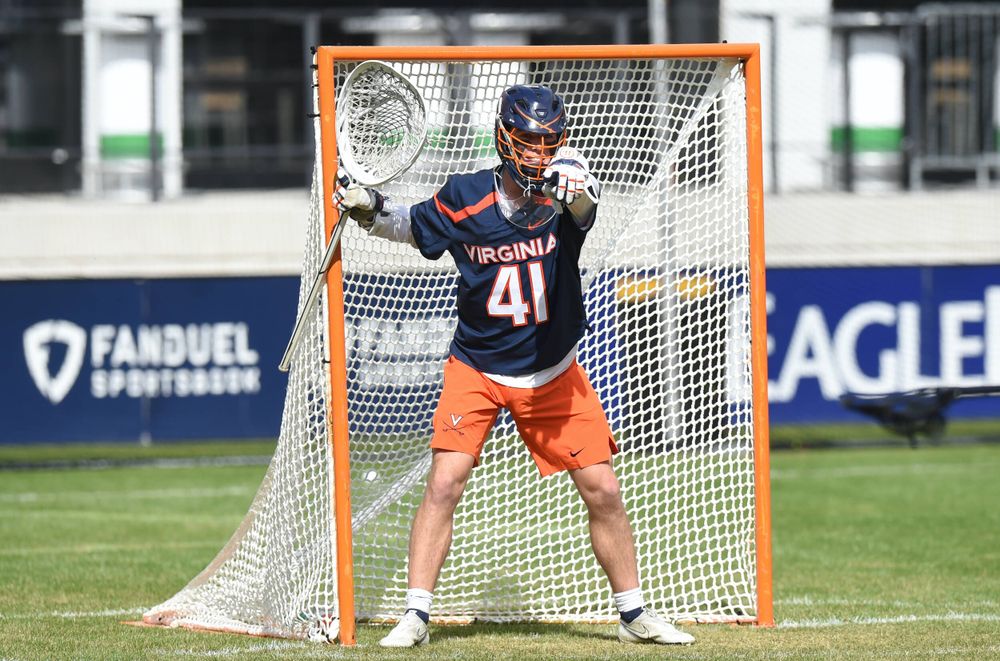 After missing UVA’s March 12 win at North Carolina with an injury, starting defenseman Cade Saustad returned to the lineup and played with a brace on his right knee. Long-stick midfielder Ben Wayer, who hadn’t played since the Feb. 5 opener, also returned for the Cavaliers.

“We knew it was coming,” Tiffany said of Maryland’s firepower, “but we just weren’t able to stop it. I admire Cade Saustad coming back from an injury within two weeks and giving us a gutsy performance out there. But also give credit to Keegan Khan and going at that matchup and winning that matchup. They recognized that maybe they could take advantage of someone who’s not 100 percent but is gutting it out there. And so I thought Maryland’s coaching staff and Keegan Kahn exploited that really, really well. We were excited to have Ben Wayer back, and he was out there. But both of them were sort of getting their game legs back and getting [accustomed to] the speed of the game. And in a game like today, there’s no time to catch up. You’ve got to be there already. But it wasn’t just one phase.”

Moore, Saustad and defensive midfielder Grayson Sallade are the Cavaliers’ captains. Moore said the atmosphere Saturday felt like that of “a playoff game. I just had the same chills that I got during the national championship game.”

This game ended unhappily for the Hoos, but the season continues. Moore believes the team, especially its younger players, will benefit from the experience at Audi Field.

The NCAA tournament starts May 14, and Virginia and Maryland could well meet again this season. For now, though, the Cavaliers will focus on their remaining regular-season games.

Even though the Terps dominated Saturday, Moore said, “I saw a lot of positivity out there today … Obviously, it was a bad, bad loss, down 11 goals, but I think we’re gonna [bounce back]. It’s a game, and it’s a fun game we play. Like Dom Starsia used to say, ‘Find that little kid in you.’ I think we going to start brand new tomorrow and get after it tomorrow.”