CHARLOTTESVILLE – Beth Lillie missed Final Exercises at the University of Virginia last spring, and she’ll miss them again this year.

“Wouldn’t want it any other way,” said Lillie, who’ll leave UVA with two degrees, a bachelor’s in economics and a master’s in higher education.

That’s because graduation at the University coincides with the NCAA Championships in women’s golf. While her fellow graduates were walking the Lawn last year, Lillie was in Scottsdale, Ariz., where she placed ninth in the NCAA individual tournament.

She’ll be back in Scottsdale next weekend, and this time her UVA teammates will join her at Grayhawk Golf Club. The eighth-ranked Cavaliers placed second this week at the NCAA regional in Ann Arbor, Mich., to secure one of the 24 spots at the NCAA Championships.

The top four teams from each of the six regional sites will play in Scottsdale.

The Wahoos’ mood wasn’t as upbeat this time last year. They were ranked 11th nationally heading into the NCAA regional in Columbus, Ohio, only to stumble. They finished ninth and thus did not advance to Scottsdale.

“We absolutely underperformed,” Scott said. “It was a condensed, COVID spring season where we played a ton, and it felt like we just ran out of steam. But also our ball-striking wasn’t clicking during last year’s regionals, and we pride ourselves on being a great ball-striking team, and when that went, we weren’t able to make it work.”

Lillie qualified for last year’s NCAA Championships as an individual competitor, and Scott and assistant coach Marissa Majors accompanied her to Scottsdale.

“It was obviously a super fun experience for me,” Lillie recalled this week, “but probably something was missing. I just know how fun it is to compete with my team, it’s my favorite thing to do. I remember I finished the four rounds of stroke play, and I sat in the car with Coach, and I was like, ‘I’m more tired than I’ve ever been after a team tournament,’ just because you don’t have that team energy to [fuel] you, even through the 100-degree heat and four days of rounds. So I’m excited to go back this year and have that energy and have everybody be so excited and driven and prepared. We can totally do well and win this thing.”

On and off the golf course, 2021-22  has been memorable for Lillie, who had an internship with the football team’s video services unit.  She chose to return to UVA for a fifth year in part because she wanted to help her golf team pursue postseason success.

“If it’s not the biggest reason, it’s tied for first,” said Lillie, who’s from Fullerton, Calif. “I’ve loved my master’s program, it’s given me a lot of direction in my life, but I think the thing that’s motivated me the most is wanting to have that experience with this team and these coaches.” 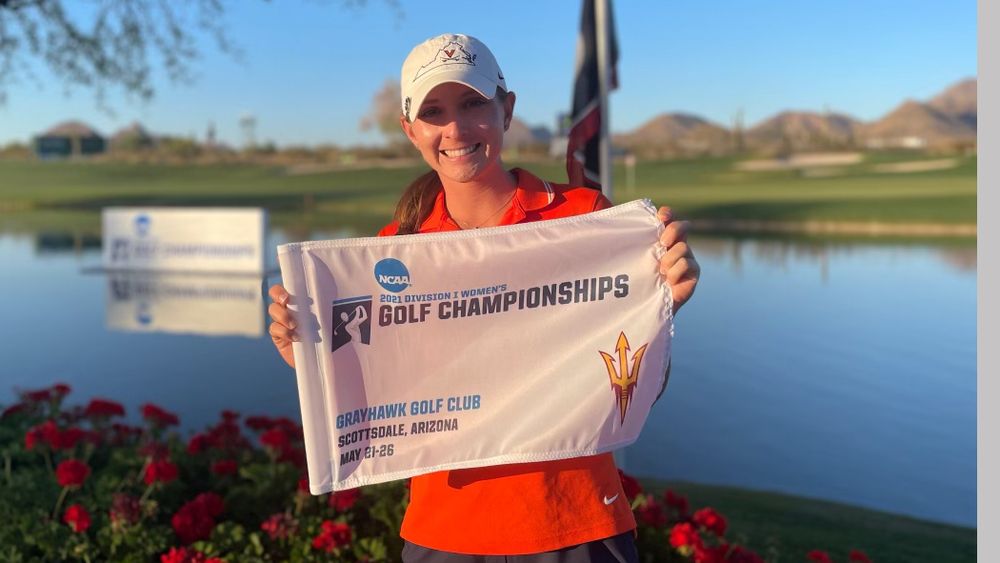 UVA didn’t lose any players from its 2020-21 roster. For those veterans, Lillie said, “something that was always a little bug in the back of people’s minds was how disappointed and how sad we felt after [last year’s NCAA regional], and how much it felt like wasted potential, because the team was really good last year, too.”

Whenever the Hoos encountered adversity, Lillie said, “we could always fall back to [thinking], ‘We are not going to do the last thing we did last year,’ and it showed through all of our preparation, just the little things we did all year. It also showed in how happy everybody was [after the regional ended in Ann Arbor].”

Scott said Lillie’s “teammates really, really wanted this for her. As much as her teammates wanted it for themselves, they also really want it for her, because of what she’s meant for this program.”

For the season, Cleary leads UVA with an average of 72.63 strokes per round, and Sambach is second at 72.70.

Sambach is part of a first-year class that also includes Megan Propeck and Allie Kantor.

“I think that the quality of that class really helped attract Beth to want to stay, too,” Scott said. “She was like, ‘Yeah, Coach, I want to be part of that.’ We had a really good feeling about this year from the beginning.”

Sambach, whose family lives in the golf mecca of Pinehurst, N.C., is “a first-year on paper, but she plays like such a vet,” Lillie said. “She’s so emotionally steady on the golf course. Her golf game is steady. That’s sort of a given, but she doesn’t get nervous, she doesn’t get flustered. She’s so calm. She performs. It’s impressive, and I think it impresses everybody on our team. The other first-years too, they’re all so mature and add so much to the team at practice and in qualifying. They make it a competitive environment. It’s like no one’s on a learning curve. I’ve been on the team for five years. I was a first-year. I know how hard it can be to be like that, but particularly what Amanda is doing is so impressive.” 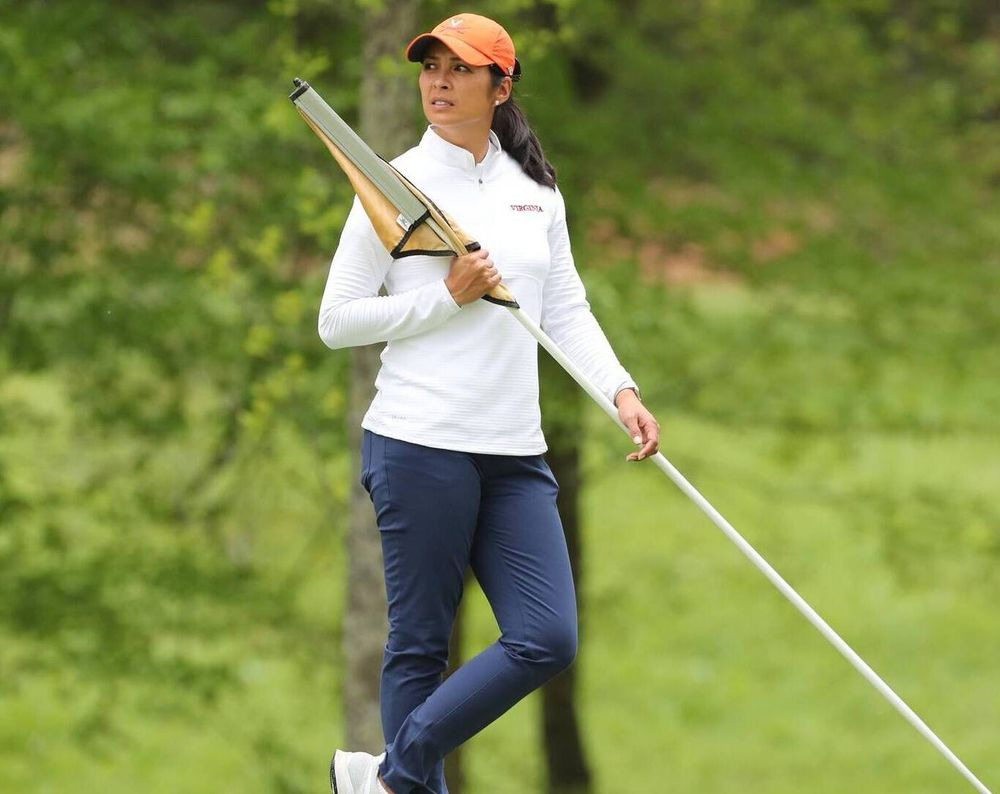 The Cavaliers lost one of their better players, junior Virginia Bossi, to a season-ending shoulder injury over the winter, but that hasn’t deterred them. Scott said the team’s sessions with one of UVA’s sports psychologists have helped.

“We sat down at the beginning of the year with Jason Freeman,” Scott said, “and we asked the team, ‘What do you want to maintain, what do you want to achieve, and what are some of what we call potential road blocks to success?’ We talked about how last year there were things that went well, but there were certainly things about the formula that didn’t allow us to advance.

“Something that’s really helped the squad this year is just identifying and mentally preparing for the potential challenges that we could see. If they’re anticipating it, it’s not that they have a solution in mind, but it’s not as shocking when it comes to you. If you’re in that mode of already anticipating the challenge, you’re like, ‘OK, I’m ready for this.’ ”

In late March, the Cavaliers competed at the Ping ASU Invitational in Phoenix. During that trip, they drove to Scottsdale “and took a quick look around the course and the facilities,” Scott said, so Lillie’s teammates could familiarize with Grayhawk.

The tournament begins next Friday. The Cavaliers’ highest finish at NCAAs is fourth (2011 and 2012), and they’ll be looking to make more history this year.

Behind Cleary’s 67 UVA Surges to Lead at NCAA Regional

UVA Finishes First Round of NCAA Regional in Fourth Place