Hoos Ready for Next Challenge in Greenville

GREENVILLE, N.C. — On a hot, sticky afternoon, more than 5,000 fans, virtually all of them rooting for the home team, packed Clark-LeClair Stadium to watch East Carolina crush Coppin State 17-1.

Enough of those ECU supporters stuck around for the second game to give Virginia left-fielder Alex Tappen an inkling of what to expect Saturday night.

“I think it’s gonna be an unbelievable environment,” Tappen said Friday night after UVA rallied to defeat Coastal Carolina 7-2. “Obviously, they’ve got a great fan base. Even in our game, they had a ton of ECU fans lining the outfield in those chairs in those seats. So it’s gonna be exciting. This is what June baseball is all about.”

The Pirates, seeded No. 8 overall in the NCAA tournament, have won 19 straight games, the longest such streak in the nation.

The regional’s opening game was still in progress when ECU announced that no tickets remained for the Saturday night clash.

“The environment, I love it,” O’Connor said. “This is what college baseball should be about. It’s an honor, it’s a privilege, that we have an opportunity to play [Saturday] night in this great environment. I know for many years they’ve worked very hard in Greenville to develop this kind of atmosphere, and I’ve got a tremendous amount of respect for it.” 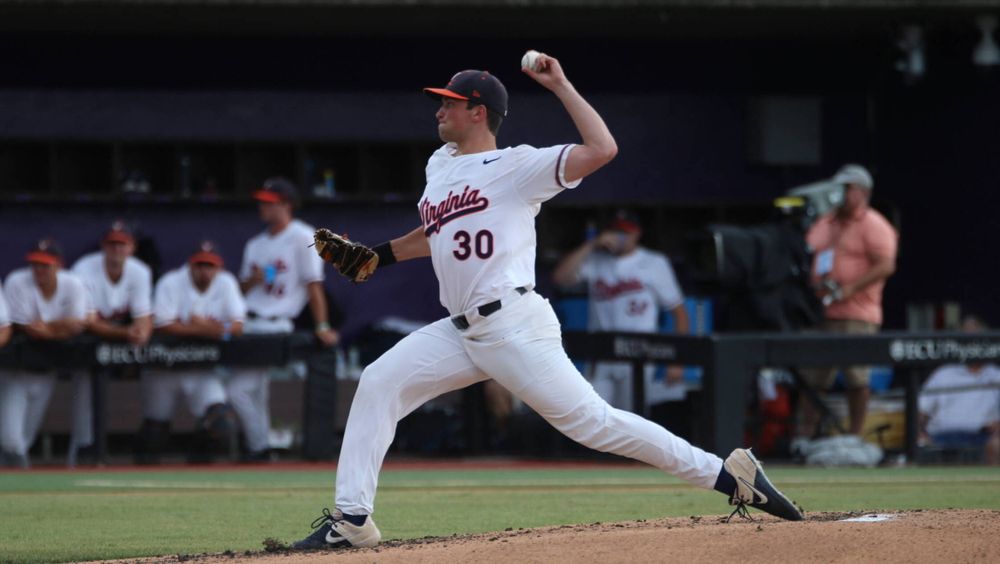 The Wahoos entered the NCAA tournament on a three-game losing streak and promptly committed two errors and gave up two unearned runs in the second inning against Coastal. That didn’t faze them.

Starting pitcher Nate Savino delivered a sterling performance, Tappen made two diving catches in left, and Virginia totaled 11 hits, including sophomore catcher Kyle Teel’s two-run double in the fourth. The Hoos scored four runs in that inning to take the lead for good.

“At the end of the day, if you’re going to win at this level, in these type of situations, you have to make plays,” Coastal head coach Gary Gilmore said. “They outplayed us … That young man pitched great. He threw more strikes today than he’s been throwing recently. Heck, he was really good. He was one of the better left-handers we’ve seen all year.”

Savino, a 6-foot-3 junior, scattered five hits, struck out four and walked two in 6.1 innings, his longest appearance since March 25.

“He completely pounded the bottom of the zone, got a lot of ground balls,” O’Connor said. “When he’s his best, the fastball velocity is good and he’s at the bottom of the zone getting a lot of ground balls, and he was terrific tonight. When you play in this tournament, it certainly helps when you get guys that can pitch past the fifth inning, because it takes a lot. It takes a huge effort to advance out of this and go on to next weekend, and he was outstanding tonight, as were Jay Woolfolk and and Matt Wyatt.”

Savino left the stadium with a prized possession: a gray T-shirt that every player in the program would like to have. On it is printed GRCR, which stands for gritty, resilient, clutch, relentless.

Virginia’s players decided they wanted “to  recognize a player after each game this season,” O’Connor said. “And so I choose a player that I believe exemplifies what our baseball programs about after each game, and Nate Savino certainly did that. I could have given it to a lot of other guys—Gelof and Tappen and a lot of guys— but I felt like him pitching deep in the game was key for us not only in this game but key for us for the weekend.”

With runners on second and third and one out in the seventh, Savino left the game to a rousing ovation from the UVA fans behind the home dugout. In came Woolfolk, a freshman right-hander. He struck out the first batter he faced and then walked to the second to load the bases. But sophomore Jake Gelof quelled the Chanticleers’ threat with a diving stop at third base, and the Cavaliers exhaled.

“It just takes guys like that to win these games,” Savino said.

Wyatt, a junior right-hander, took over in the ninth and struck out the side to put the Hoos in the winners’ bracket.

Against Reid VanScoter, the Sun Belt Conference pitcher of the year, Virginia collected nine hits and scored seven runs, six of them earned. Gelof went 3-for-4 to lead the Cavaliers, and Tappen and Casey Saucke and Ethan Anderson had two hits apiece.

“Certainly the early part of the game did not go as we scripted,” O’Connor said. “We didn’t handle the ball real well on the infield, but I’m just proud of how guys bounced back. This time of the year, some crazy things can happen, and you’ve got to be able to adjust within a game and handle the emotion of the game that it’ll bring, and we did that.”

Saucke (right field) and Anderson (designated hitter) were among the four freshmen who started for UVA, along with shortstop Griff O’Ferrall and second baseman Justin Rubin.

“They’re seasoned veterans now,” O’Connor said. “They’re veteran players, but certainly it bodes well for the future of Virginia baseball with those guys.” 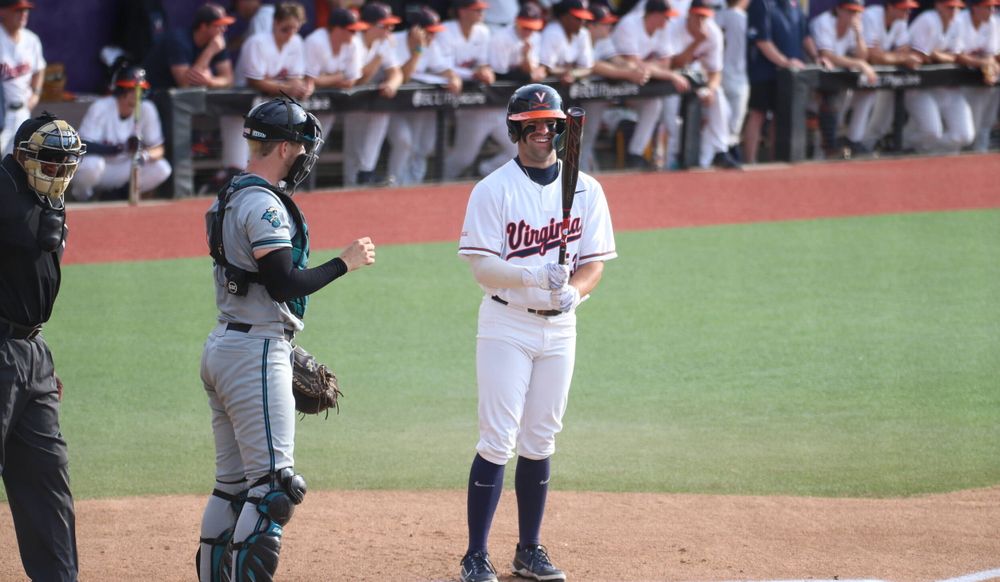 Gelof had two RBI to bring his total for the season to 76, one shy of the program record set by Pavin Smith in 2017, and his classmate Teel showed again how comfortable he is playing on this stage.

In last year’s NCAA tournament, Teel hit a grand slam in the deciding game of UVA’s super regional with Dallas Baptist in Columbia, S.C., and then he went 7-for-12 at the College World Series in Omaha, Neb.

Teel entered the NCAA tournament batting .271. He was more productive at the plate last season, when he wasn’t catching every day, but O’Connor never lost faith in No. 3.

“I really like the way that he’s swinging the bat,” O’Connor said. “Talking to the ESPN guys before this weekend, I shared with them that I felt like Kyle was going to be one of the big breakout players this weekend, and it was going to be important for us to be successful not only with the bat, but more importantly managing the pitching staff. I thought he did a terrific job tonight behind the plate.”

The Cavaliers would rather be playing at Disharoon Park this weekend, but hosting a regional or super regional can be challenging, O’Connor noted. “It’s difficult. There’s a lot of there’s a lot of pressure, because everybody’s predicting that you should advance.”

Under O’Connor, the Hoos have made five appearances in the College World Series. In three of those seasons—2009, 2015 and 2021—they started the NCAA tournament away from Charlottesville.

“There is something special about doing it on the road,” O’Connor said.