With the win, the Cavaliers tacked on 0.5 points in the 2022 Commonwealth Clash standings to extend their lead to 4.0 to 0.5.

UVA finished Friday’s contest with 78 total kills, which stands at No. 5 in program history since the implementation of the rally-scoring format (2001), and is fifth all-time among five-set matches. The last time a Virginia team recorded at least 78 kills in a single match was on Oct. 21, 2006 against Georgia Tech.

Virginia was led by Grace Turner (23 kills, 14 digs), who took a season-high 57 swings and recorded her ninth career double-double. The Cavaliers also received a nice boost from Simone Dominique, who came off the bench to post a career-best 13 kills on 34 swings, hit .235 and registered six digs. Middle blockers Abby Tadder and Veresia Yon both notched 11 kills each, as did right side hitter Mary Shaffer. Yon led all Cavalier front row hitters with a hitting clip of .409. Setter Gabby Easton dished out 49 assists, her best in a UVA uniform and most by a Cavalier in a single match since 2018.

Set 1: Virginia Tech 25, Virginia 21
After Virginia won the first five points of the match, the Hokies clawed their way back to take their first lead of the set at 17-16. From the point forward, the Cavaliers only came up with two kills for the remainder of the set, which Virginia Tech won, 25-21. Yon posted four of her 11 total kills in the opening frame and Shaffer contributed three block assists.

Set 2: Virginia 25, Virginia Tech 23
Once again, the Cavaliers jumped out to another big lead – this time 11-3 – to open the second. A 9-1 run by the Hokies gave Virginia Tech its first lead of the set, 14-13, before UVA capped the run with four unanswered scores of its own. The set would see eight tied scores and five lead changes, including up until the very end. The Cavaliers closed out game No. 2 by registering kills on the final three plays, including back-to-back terminations by Dominique, to win by two. Dominique finished with three kills in the set, while Turner led all players with five kills and five digs in the second.

Set 3: Virginia 25, Virginia Tech 22
Coming out of the break, Virginia tallied five straight points to gain a 10-5 advantage early in the third. The Hokies trailed for most of the frame up until they tied the set, 20-20, but the Cavaliers’ balanced attack on offense proved to be too much for VT to overcome. Tadder, Turner, Dominique and Easton all registered kills in the waning plays of the set to deliver the win in the third.

Set 4: Virginia Tech 29, Virginia 27
The fourth was close throughout, but five straight Hokie points were ultimately the Cavaliers’ downfall in the set. The 5-0 run gave VT a 22-19 lead and just four plays later, the Hokies had set point, 24-20, but the Hoos did not go away quietly. Virginia rattled off four straight points to tie the frame and force extra plays, thanks to a pair of kills by Turner and a block solo by Tadder. The Hokies had set point two more times before back-to-back UVA scores – capped by a Turner ace – gave the Cavaliers set point, 27-26. However, the Virginia Tech scored three straight points by virtue of a kill, an ace and a block solo to win the set and force a decisive game No. 5. Turner finished with seven kills in game No. 4 and libero Madison Morey posted eight of her team-high 17 digs in the frame.

Set 5: Virginia 16, Virginia Tech 14
Virginia Tech went up 6-3 to start the fifth, but by the time the two teams traded sides at the halfway point, it was the Cavaliers who led, 8-7. First-year defensive specialist Kate Johnson came off the bench and served up back-to-back aces, which were followed by a VT attack error to give UVA a 10-7 lead. Later, the Hokies responded with three straight scores of their own to tie the set, 13-13, before Virginia signaled for time. Coming out of the huddle, the Cavaliers scored on three of the next four plays, including Turner, who capped the match by tying her career high of 23 kills for the third time this season.

UP NEXT
Virginia continues its four-match ACC road swing when it travels to Wake Forest (12-10, 4-7 ACC) on Sunday (Oct. 30). First serve from Reynolds Gymnasium is set for 1 p.m. on ACC Network Extra (ACCNX). 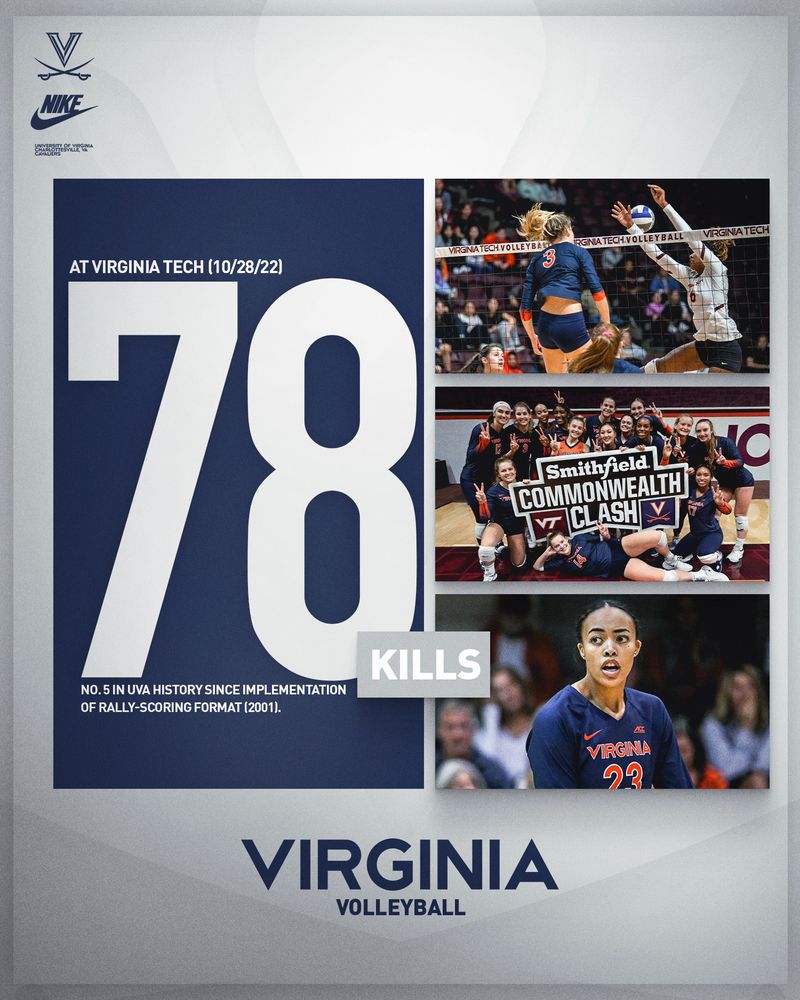