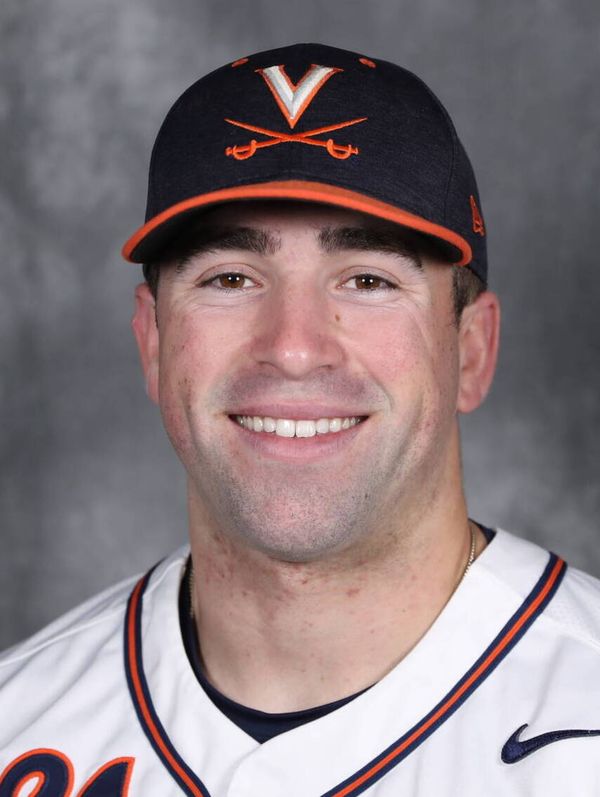 2022
• First Team ABCA/Rawlings All-Atlantic Region honoree
• First Team All-ACC selection
• One of five Cavaliers named to the ACC All-Academic Team
• Became the third Cavalier ever to drive in 70 runs in season with an RBI in the season finale against Louisville on May 21
• Named to All-Greenville Regional Team after going 7-for-13 (.538) with three runs scored and an RBI in three games
• Tied the UVA postseason single-game record with four hits in elimination game against Coastal Carolina (June 5)
• Earned ACC Player of the Week and a spot on the Collegiate Baseball National Team of the Week on March 21 after he hit .611 (11-for-18) with two doubles, three home runs and 14 RBI in a 5-0 week for the Cavaliers.

2021
• Started 32 of the 55 games in which he appeared (19 in RF, 11 in LF & 2 at 1B)
• Was 33-for-144 (.229) with 10 doubles, six homers and 24 RBI
• 16 of his 33 hits went for extra bases including a career-high six home runs
• Led the team with four pinch hits (all XBH), including a game-tying home run against Wake Forest on May 15.
• Put together a 15-game hit streak, the longest of anyone on the team, from April 30-June 13 despite not starting in five of the games. UVA went 11-4 during the streak.
• All six of his homers on the year came in an 11-game stretch, including long balls in back-to-back games on May 28 & 29 and again on June 12 & 13. Five of the six homers came in either ACC or NCAA postseason play.
• Went 4-for-8 with two home runs, two runs scored and three RBI in two starts at the ACC Tournament. Homered against Notre Dame on May 28 and against Duke on May 29.
• Hit a three-run home run in the eighth inning of game two of the Super Regional against Dallas Baptist, an eventual 4-0 UVA victory
• Went 1-for-2 with a solo home run in NCAA Regional elimination game against South Carolina on June 6.
• Had a go-ahead single in the bottom of the seventh of the NCAA Regional final game against ODU on June 8, an eventual 4-3 extra-inning victory for UVA.
• Recorded his lone outfield assist of the season on April 6 against William & Mary and cut the go-ahead runner down at home plate in the 10th inning
• Listed on the ACC Academic Honor Roll

Summer 2021 – Played 14 games for the Kalamazoo Growlers of the Northwoods League alongside UVA teammate Jake Gelof … went 13-for-55 (.239) with five doubles, a home run and seven RBI … hit safely in last five games of the season including a 3-for-5 effort against the Traverse City Pit Spitters on Aug. 11 in which he homered and scored two runs.

2019
• Started 34 of the 46 games in which he appeared, all 34 starts came in right field
• Batted .228 (29-for-127) with five doubles, three home runs and 23 RBI
• Went 2-for-5 with two runs scored, a home run and four-RBI in the nightcap of a doubleheader against Florida State (April 20)
• Collected three hits, including two doubles while driving in three runs against Norfolk State on April 10

PERSONAL
• An Economics major
• Son of Roger and Kathy Tappen
• Has one older sister, Taylor-Morgan, and one younger brother, Jackson
• Grandfather, Harry Tappen, played baseball and football at Thiel College (1959-62)

Tappen Starting to Round Into Form
Baseball

Tappen Starting to Round Into Form