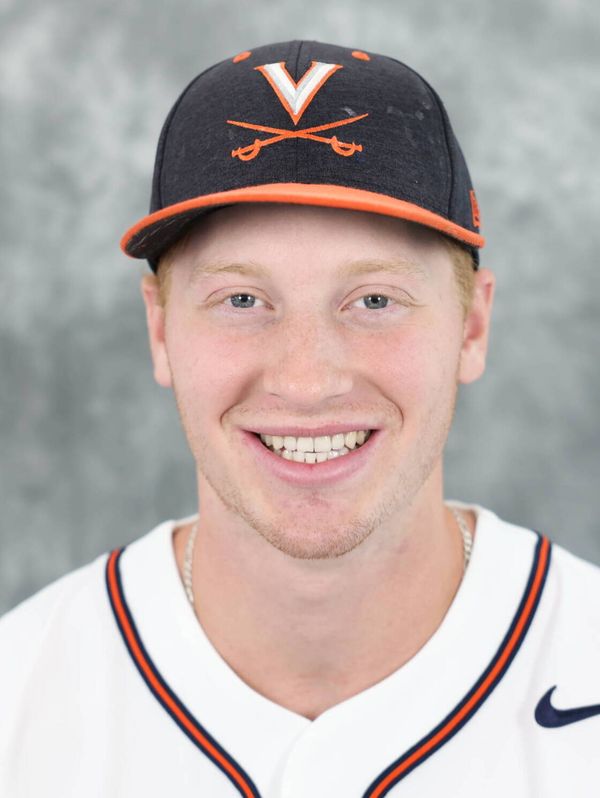 2022
• Listed on Collegiate Baseball Newspaper’s Freshman All-America Team and was a First Team Freshman All-American according to Perfect Game and D1Baseball.com.
• Named to the ACC All-Freshman team.
• One of five Cavaliers named to the ACC All-Academic Team and also was listed on the ACC Academic Honor Roll.
• Appeared in 53 of the 58 games with 50 starts (46 in RF, 4 at DH).
• Batted .360 (67-for-186), the eighth highest of any freshman in the country and third-highest by any ACC first year. His batting average was also the second-highest of any UVA freshman under Brian O’Connor (Stephen Bruno – 2010).
• Totaled a team-best, 16 doubles, tied for the 13th most in the ACC.
• Started his collegiate career by hitting safely in his first 21 games, the second longest UVA single season hit streak since 2007 (Brandon Guyer) and the longest by a UVA first year since 2000.
• Went 3-for-4 with a home run, a run scored and two RBI in his collegiate debut. Recorded his first collegiate hit (infield single) in his first at bat. Homered for the first time in his fourth collegiate at bat.
• Batted .463 (25-for-54) with four doubles, four home runs and 18 RBI in his first 15 games.
• Homered in three-straight games from March 15-18, concluding with a solo shot against Boston College (March 18).
• Led the team with a pair of outfield assists, including 9-3 double play against Wake Forest on 3/26.
• Finished the year hitting safely in the final seven games and 10 of his last 11.
• Went 5-for-12 with two doubles and two RBI in three games at the NCAA Greenville Regional
• Ranked No. 17 on Perfect Game’s top 75 freshmen prior to the season

2021 SUMMER: Played 30 games for the Niagara Power of the Perfect Game Collegiate Baseball League with future UVA teammate Alex Greene … Batted .221 (21-for-95) with six doubles, a triple, a home run and eight RBI … put together six multi-hit efforts in his final seven games with the Power … reached base safely in 20 of the 30 games he played in .

GREECE ATHENA HIGH SCHOOL
• Named the 2020-21 Gatorade New York Baseball Player of the Year.
• Posted a .483 batting average with eight home runs, 36 runs scored, 24 RBI and 20 stolen bases, leading the Trojans to a 15-5 record and the Section V Class A state final as a senior. 21 of his 28 hits went for extra-bases
• According to Perfect Game was nationally the No. 9 shortstop and the No. 41 overall player in the 2021 recruiting class
• Played in the 2020 Perfect Game All-American Classic in Oklahoma City. Also a participant in the PGAAC Home Run Challenge where he hit 11 homers.
• Named the 2021 Monroe County Division IV Player of the Year and Section V Class A Player of the Year.
• Also pitched at Greece Athena and hurled five perfect innings as part of a combined no-hitter in the 2021 season opener.
• Matched Section V record with three home runs in a game on June 1, 2021
• His junior season was cancelled due to COVID19 pandemic.
• Played travel baseball for Team Elite and Dirtbags Baseball