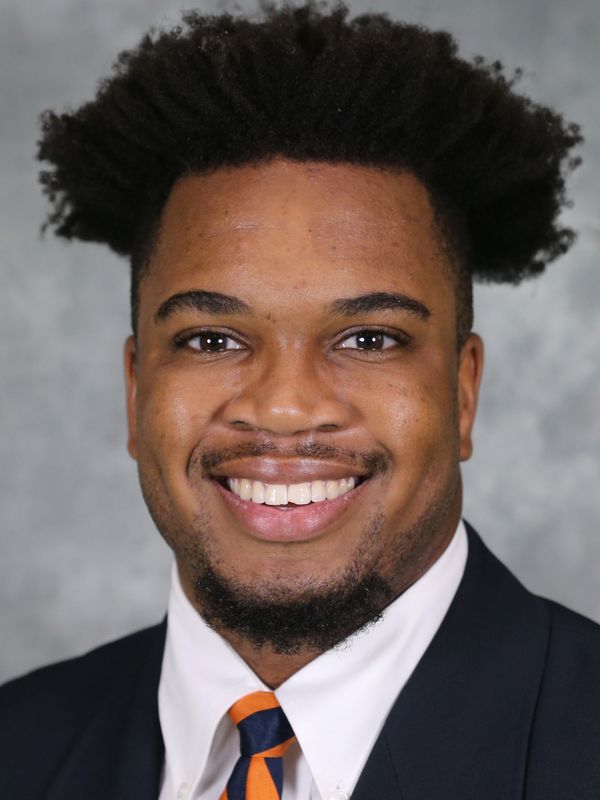 AT VIRGINIA
2021 – Named to 2021 National Football Foundation Hampshire Honor Society … started the first nine games of the season as nickel back before missing the final three games due to injury … had 24 tackles and credited for breaking up five passes … had an interception against Duke … had season-high seven tackles at BYU. 2020 – Started all 10 of UVA’s games … notched three tackles and one pass breakup in season-opening win over Duke … made two stops at No. 1 Clemson … made four tackles, 0.5 tackles for loss, broke up one pass and intercepted another against NC State … made four tackles and broke up two passes at Wake Forest … made three tackles at No. 11 Miami … made four tackles against No. 15 North Carolina … made two tackles and notched one tackle for loss against Louisville … made three tackles, 1.0 sack and one interception against Boston College … made two stops at Virginia Tech along with 0.5 tackle for loss. 2019 – Started all 14 of UVA’s games …  at Pitt he made three tackles, while breaking up one pass … recorded five tackles and 1.0 tackles for a loss against William & Mary … made nine tackles in the win over Florida State, including assisting Bryce Hall on the game’s final play by stopping the Seminoles’ Cam Akers at the four-yard line as time expired … made one stop in the win over Old Dominion … made five tackles at No. 10 Notre Dame … made five tackles and 1.0 tackles for loss at Miami … made one tackle and broke up two passes against Duke … made five stops and broke up one pass at Louisville … made two stops at North Carolina … made seven stops against Georgia Tech … named ACC Defensive Back of the Week after picking off two passes and breaking up another against Liberty … his first interception against the Flames snapped Buckshot Calvert’s FBS-leading pass streak with out an interception (295) … made seven stops in the Commonwealth Cup victory over Virginia Tech … made four tackles, 2.0 tackles for loss and 1.0 sack in the ACC Championship game against Clemson … made six tackles and broke up one pass in the Orange Bowl against Florida. 2018– Appeared in all 13 of UVA’s games with one start … caught one pass for 20 yards against Louisville in the ACC opener … playing safety at Duke he made two tackles … made two tackles during his time on defense against North Carolina … made one tackle on defense against Pitt … made his first collegiate start at free safety against Liberty and made a career-high eight tackles … also intercepted his first career pass against the Flames. 2017 – Appeared in all 13 of UVA’s games … made collegiate debut against William & Mary … saw time at wide receiver, cornerback and on special teams … made first collegiate catch against UConn for eight yards … saw time in the wildcat at Boise State and rushed three times for 14 yards, his first career rushing attempts … rushed once at North Carolina … rushed once for 13 yards and made one tackle on defense against Boston College … made one tackle on defense at Pitt. 2016 – Did not appear in any games.

HIGH SCHOOL AND PERSONAL
Played quarterback at Parkland High School for head coach Jim Morgans … rated a three-star recruit according to ESPN.com, 247sports.com and Scout.com … rated a two-star recruit according to Rivals.com … led Parkland to four straight district championships, three as the starting quarterback … Pennsylvania 2015 Player of the Year … named the 2015 lehighvalleylive Football Player of the Year … finished the 2015 season throwing for 2,947 yards on 201-of-345 passing and 26 touchdowns … the dual-threat quarterback also carried the ball 216 times for 1,385 rushing yards and 19 rushing touchdowns … born in Raleigh, N.C. … earned his degree in history and is currently doing graduate work in the Curry School.