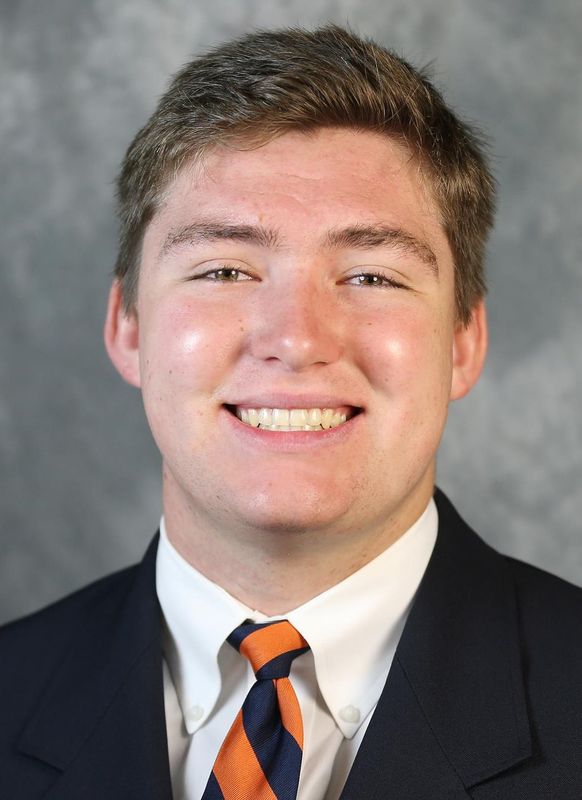 AT VIRGINIA
2020 – Appeared in UVA’s first seven games before suffering a season-ending injury against Louisville … made all seven starts at left guard … part of an offensive line that ranked No. 1 in the ACC and No. 12 in the nation in tackles for loss allowed (4.2), while also ranking No. 2 in the ACC with 2.0 sacks allowed a game … named to 2021 ACC Academic Honor Roll.  2019 – Started 13 of UVA’s 14 games … of his 12 starts, 12 came at right tackle and one came at right guard … started the ACC Championship game at right guard … helped block for quarterback Bryce Perkins, one of two quarterbacks in the nation with 3,000+ passing yards and 700+ rushing yards … blocked for Perkins as he broke the UVA single-season passing record and single-season total offense record. 2018 – Started all 13 games … started the first 12 games at center … started the Belk Bowl at right guard … rated as the second-highest center in the ACC by PFF … is rated at 85 percent by PFF as a run blocker … is rated over 90 percent by PFF as a pass blocker … owns 50 knockdown blocks … helped block for quarterback Bryce Perkins, one of two players in the nation with 2,600+ passing yards (2,680) and 900+ rushing yards (923), joining Oklahoma’s Kyler Murray. 2017 – Appeared in all 13 of UVA’s games with 11 starts … started two games at left tackle and nine at center … made collegiate debut against William & Mary at left tackle … was the first freshman, true or redshirt, to start a season-opening game on the offensive line for UVA since R-Fr. Will Barker started at RT in 2006 vs. Pitt. … was the first freshman, redshirt or true, to start a season-opening game at LT since D’Brickashaw Ferguson (true freshman) in 2002 vs. Colorado State … posted 25 knockdown blocks on the year, including a season-best five against William & Mary in the opener … helped block for Kurt Benkert, who became the first Cavalier in program history to throw for over 3,000 yards in a single season. 2016 – Did not appear in any games … dressed for the Miami, Georgia Tech and Virginia Tech games.

HIGH SCHOOL AND PERSONAL
Played offensive tackle and defensive line at Valor Christian High School for head coach Rod Sherman … rated a three-star recruit according to ESPN.com, Scout.com and 247sports.com … rated a two-star recruit according to Rivals.com … a first-team all-state honoree … a first-team All-Centennial League performer on the offensive line … helped Valor Christian to a 12-2 record and the 2015 Class 5A state championship … won three state titles during his four years with the Eagles … earned a degree in interdisciplinary global studies … working on a master’s degree in higher education … 2020-21 James P. Soper III Football Scholarship recipient.