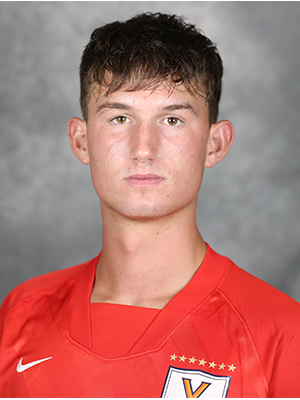 2022
• All-ACC Third Team selection
• All-ACC Tournament Team selection
• Recorded eight solo shutouts, the tenth-most by any UVA goalkeeper in a single season
• Played every minute in goal for the Cavaliers
• Totaled 64 saves with a percentage of .762 and a goals-against average of 1.03
• Named ACC Co-Defensive Player of the Week (10/4/22)
• Recorded a season-high nine saves in Virginia’s 1-0 victory over Pitt in the ACC Quarterfinal (11/6/22)
• Named National Player of the Week by Top Drawer Soccer (11/8/22)
• Made six or more saves in each of Virginia’s postseason matches
• Climbed into 7th all-time on the Virginia’s career saves list with his total of 150
• Posted a record of 10-4-5 for the season

PREP
• No. 87 on TopDrawerSoccer.com Top 150 Club Soccer Player Rankings
• Played soccer for Zionsville Youth Academy for five years before joining Indiana Fire Development Academy
• Signed with Indy 11 (USL) prior to the 2019 season
• For Zionsville High School, made 68 saves and tallied 17 shutouts in 31 career varsity appearances
• Earned First Team All-State honors his sophomore year of high school
• After signing with the Indiana Fire Academy in 2018, started eight of his 12 appearances for the Academy’s Under-18/19 squad.