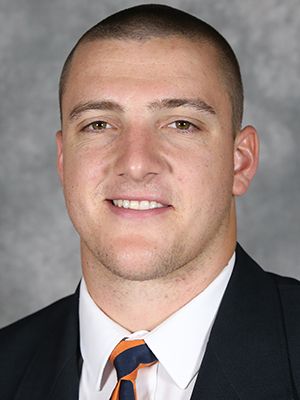 PREVIOUS SCHOOL (Michigan State)
2021: Appeared in first three games of the year … made one tackle and saw action in 24 snaps …  against Youngstown State on 9/11 … season cut short due to injury after third game. 2020: Played in all seven games (249 snaps), registering a career-high 18 tackles, including 2.0 tackles for loss (5 yards), 0.5 sack (2 yards), one fumble recovery and two QB hurries … made first start of season at Penn State and collected second straight game with at least 0.5 tackle for loss, with 1.0 TFL, part of his career-high five total tackles … logged 1.0 tackle for loss, with 0.5 sack, as part of four total tackles vs. Ohio State, matching a career-high for both TFLs and sacks, and notching a then career-best total tackles … logged two tackles and first career fumble recovery in Northwestern game, playing in 29 snaps … posted pair of stops in Indiana game, logging 26 snaps … tallied season-best and career-high tying three tackles at Iowa, playing 29 snaps … saw action at Michigan, playing 34 snaps … appeared in season opener vs. Rutgers, tallying two tackles and a QB hurry in 38 snaps. 2019: Appeared in seven games and played 39 snaps to earn his second letter … recorded an assisted tackle at Michigan … played a season-high 13 snaps vs. Penn State. 2018: Recorded nine tackles, including 2.5 for losses (6 yards) and a half sack (3 yards), in 11 games … played 213 snaps … played 11 snaps and had one solo tackle in Redbox Bowl vs. Oregon … tallied one tackle against Ohio State … logged one stop with half tackle for loss in Michigan game … recorded one tackle at Penn State … tallied one tackle with half sack in Central Michigan game … made first start of Spartan career at Indiana at defensive end, logging one tackle with half a tackle for loss … collected a career-high three tackles at Arizona State. 2017: Redshirted … named Scout Team Defensive Player of the Week vs. Penn State … made the transition from tight end to defensive end toward the end of the season … enrolled at Michigan State on Jan. 9, 2017 and participated in spring practice.

IMG ACADEMY
Ranked one of the top tight ends in the nation by 247Sports (No. 25), Scout.com (No. 32) and ESPN.com (No. 51) … listed as one of the top players in the state of Florida by 247Sports (No. 79) and ESPN.com (No. 96) … played two seasons for Coach Kevin Wright at IMG Academy in Bradenton, Florida … helped lead IMG Academy to a perfect 11-0 record and a No. 2 final national ranking by USA TODAY as a senior in 2016 … recorded 31 tackles, including three for losses and one sack, while playing on the defensive line as a senior … tallied a season-high seven tackles, including one for loss, in 38-0 win against Boyd Anderson on Sept. 23 … had five tackles apiece vs. Washington (Sept. 10) and Oxbridge Academy (Oct. 13) … as a junior, helped the Ascenders to a 9-0 record and had 19 tackles, including six for losses and 4.5 sacks … collected three tackles for loss (2.5 sacks) and four tackles overall vs. Bergen Catholic on Sept. 19 … had two tackles for loss in a 42-0 win over Southern Lab on Oct. 9 …

PERSONAL
originally from Virginia Beach, Virginia … son of John and Lori Camper … born June 1, 1998 … his father, John, was a two-year letterwinner at Duke (1986-87) as a defensive lineman … his brother, Blake, was an offensive lineman at South Carolina … graduated in 2021 with a bachelor’s degree in Agribusiness and is currently pursuing a second degree in Education.