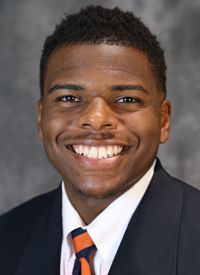 HIGH SCHOOL AND PERSONAL
Played linebacker at The Peddie School for head coach Chris Malleo… before his senior season was ranked the No. 27 player in New Jersey by NJ.com … led team to a 7-2 record in 2017 and a share of the MAPL title … named to Mid-Atlantic Prep League as a junior and senior … tabbed by Times of Trenton’s All-Area team in 2017 … had an interception on one-yard line with a 1:12 to play to preserve Peddie’s final win of the season … named one of the top 100 non-public school players in New Jersey following his junior season when Peddie went 6-2 … previously played at Penns Grove (N.J.) High School as a sophomore where he had 82 tackles for the Red Devils … earned third-team All-Group 1 honors that season by NJ.com and named to West Jersey Football League’s All-Diamond Division (second team) … son of Shonda and Ishmael Garrett … father attended UVA and sister is currently a student at UVA … a three-star recruit by ESPN.com, Rivals.com and 247sports.com.