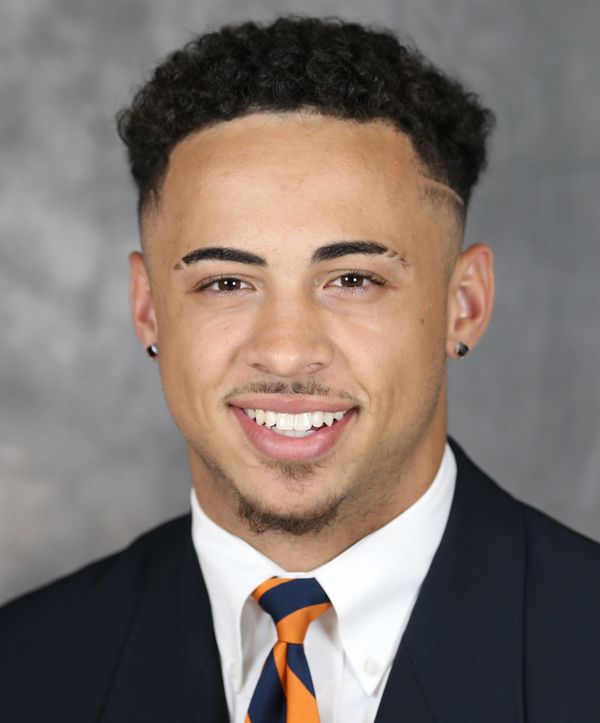 AT VIRGINIA
2021 – Selected for the 2021 ACC All-Academic team … named to 2021 National Football Foundation Hampshire Honor Society… Finished second on the team with 87 total tackles including 54 unassisted stops … that was the seventh most among ACC players for the season and was the most among all defensive backs … led the UVA secondary with five tackles for loss … shared team lead with six interceptions … had season high 11 tackles vs. North Carolina … posted interceptions against Duke, Georgia Tech and Pitt … that matched the single-season high total he had in 2019 … finished his career with nine interceptions … his three interceptions tied for fifth most in the ACC … did not play vs. Louisville. 2020 – Appeared in five of UVA’s 10 games with five starts … missed the NC State,  Miami, UNC, Louisville and Abilene Christian games with injury … made seven tackles, 1.0 tackles for loss, forced a fumble, broke up a pass and picked off one pass in season-opening win over Duke … made nine tackles and 1.0 sack at No. 1 Clemson … made  four stops and broke up a pass against Boston College … made five tackles at Virginia Tech … named to 2021 ACC Academic Honor Roll. 2019 – Appeared in all 14 of UVA’s games with 11 starts … in UVA’s opener at Pitt he made seven tackles, his first two career sacks and intercepted a pass … on back-to-back plays in the fourth quarter he made a sack and intercepted a pass to help solidify UVA’s season-opening win … recorded seven tackles against William & Mary … made five tackles against Florida State … made six stops in the win over Old Dominion … led UVA with 10 tackles at No. 10 Notre Dame … also recovered a fumble, made 1.0 tackle for loss and broke up a pass against the Irish … led UVA with eight tackles and 0.5 sack at Miami … named ACC Defensive Back of the Week after making 10 tackles and intercepted a pass with a 20-yard return against Duke … made five tackles and 1.0 sack at Louisville … made three tackles in win at North Carolina … notched six tackles and one interception in win over Georgia Tech … returned his interception against the Yellow Jackets for 37 yards, setting up a UVA touchdown … notched four tackles and 1.0 tackle for loss … shared team lead with eight tackles in Commonwealth Cup win over Virginia Tech … led UVA with 11 tackles and 1.0 tackle for loss in the ACC Championship game against Clemson … made five tackles and broke up one pass in the Orange Bowl against Florida. 2018 – Appeared in 11 of UVA’s 13 games with five starts … missed the Liberty and Georgia Tech games with an injury … appeared in the season opener against Richmond and recorded first career interception and made one tackle, which was for a loss of three yards … notched a career-high 13 tackles, including 12 solo stops at Indiana … also made 1.0 tackle for loss and broke up one pass against the Hoosiers … started the Ohio game in Nashville and finished with five tackles and 0.5 tackles for loss against the Bobcats … made four tackles against Louisville in the ACC opener … made nine tackles adn 1.0 tackles for loss at NC State … made two tackles, broke up a pass and recorded one interception against No. 16 Miami … he returned the interception 31 yards to help set up UVA’s first points of the game … made four tackles at Duke … made five tackles against North Carolina … led UVA with 11 tackles against Pitt … also added 0.5 tackles for loss against the Panthers … made seven tackles and forced a fumble at Virginia Tech … made four tackles, 1.0 tackles for loss, broke up a pass and forced a fumble against South Carolina in the Belk Bowl. 2017 – Appeared in all 13 of UVA’s games with one start … led UVA with 15 tackles on special teams, 10 of which came on kickoff coverage … one of 17 UVA true freshmen to play … saw most of his time on special teams … made collegiate debut against William & Mary on punt coverage … recorded first career tackle against Indiana … made another stop against UConn … made two stops at Boise State … made one stop at North Carolina … notched a career-high 10 tackles against Boston College, seeing most of the second half on defense … made his first collegiate start at Pitt, filling in at cornerback for the injured Juan Thornhill … made two stops at Pitt and broke up a pass … made three tackles on special teams against Georgia Tech … made two special teams tackles at Louisville … made five tackles at No. 2 Miami … made six tackles against Navy in the Military Bowl … added 0.5 tackles for loss against the Midshipmen.

HIGH SCHOOL AND PERSONAL
Played safety and quarterback at Landmark Christian School for head coach Wayne Brantley … GHSA first-team all-region on defense and first-team all-state Single A on defense … Fulton County first-team all-county (all classifications) on defense … Georgia Sports Writers Association second-team all-state Class A on defense … first-team All-Metro … was 77-of-138 passing for 972 yards and seven touchdowns in 2016 … rushed 75 times for 438 yards and nine touchdowns as a senior … made 70 tackles with five tackles for a loss and five interceptions … scored two defensive touchdowns in 2016 … in 2015, made 30 receptions for 509 yards and seven touchdowns … returned 11 kick returns for 167 yards and one score … also carried nine times as a junior for 55 yards … snatched four interceptions in 2015 and returned one for a touchdown … captain on the football and soccer teams … also plays basketball and soccer at Landmark Christian … High Honors student and a member of the National Honor Society and the Beta Club … dad, Tony, was a safety for Virginia from 1976-79 and owns the 11th-longest interception return (63) in program history … rated a three-star recruit by 247Sports.com … rated a two-star recruit by ESPN.com and Rivals.com … earned degree in inter-American studies with a minor in women, gender & sexuality … working on a master’s in education … recipient of the 2021-2022 Richmond Alumni Scholarship