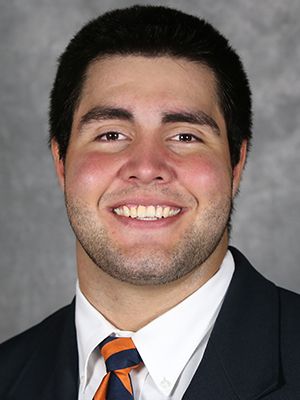 PREVIOUS SCHOOL (DARTMOUTH)
CAREER: Started all 20 games in his final two seasons (2019 & 2021) in which Dartmouth led the Ivy League in rushing and won back-to-back league championships … Dartmouth lost three games in his four years in Hanover including an 18-2 mark as a starter. 2021: Second Team All-Ivy League selection … started all 10 games at left tackle … Dartmouth ranked No. 1 in the Ivy League and No. 21 in FCS with 193.7 rushing yards per game … Dartmouth went 9-1 on the season, captured the 20th Ivy League title in program history and ranked 23rd in the final FCS Coaches Poll. 2020: Season canceled due to COVID-19 pandemic … selected for a spot on the Phil Steele Preseason All-Ivy League Third Team. 2019: Earned the starting job at left tackle and kept it the entire season … played a big part in Dartmouth winning its 19th Ivy League title and ending the season ranked in the top 25 … helped pave the way for Dartmouth to lead the Ivy League in rushing yards per game (167.0) and rank second in scoring offense (33.3 points per game) … effective pass blocker as well, contributing to the ultra-efficient passing game that ranked second nationally in passing efficiency … part of the unit that allowed fewer sacks that any other Ivy League squad … the offense was also third in the FCS in third-down conversion percentage at over 50 percent

PERSONAL
Son of Eleazar and Clara Flores … one of four football-playing brothers, plus has a sister … born on Feb. 10, 1999 … oldest brother Jacob was an All-Ivy League center for Dartmouth and spent a year in the Green Bay Packers organization … brother Charlie played on the Columbia offensive line … youngest brother Michael will be a senior offensive lineman at Dartmouth in 2022 … sister attends Harvard … high school of 100 students was featured in a USA Today story for having no fewer than 10 seniors heading to DI college football teams in 2018 … pursuing a master’s degree in Religious Studies.