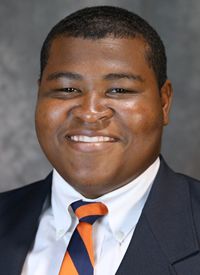 AT VIRGINIA
2020 – Appeared in three of UVA’s 10 games with two starts … made two tackles against Abilene Christian. 2019 – Appeared in three of UVA’s 14 games. 2018 – Appeared in eight of UVA’s 13 games with five starts, including the Belk Bowl against South Carolina … one of 13 UVA true freshmen to appear in 2018 … one of eight UVA true freshmen to make collegiate debut in the season-opening win over Richmond … started at nose tackle, becoming the first UVA true freshman to start a season opener on the defensive line since 2002 when DE Kwakou Robinson started against Colorado State … he is only the fourth UVA freshman (true or redshirt) since 1986 to start a season opener on the defensive line … started against Ohio in Nashville and made one tackle … made four tackles, 1.5 tackles for loss and shared a sack with Jordan Mack in the ACC opener against Louisville … made two stops against Pitt … made one tackle against Liberty.

HIGH SCHOOL AND PERSONAL
Played defensive line at Osceola High School for head coach Doug Nichols … helped Kowboys to a 10-1 record his senior season … reached regional semifinals of Class 8A playoff … made 41 tackles and 9.0 sacks in 2017 as a senior … named to all-county team as a junior and senior … ranks No. 18 on the Sentinel Central Florida’s Super60 list … made 46 stops and 7.5 sacks as a junior in 2016 … son of Juwan Crockett and Howard Redmond … heavyweight on high school wrestling squad … a three-star recruit by ESPN.com, Rivals.com, Scout.com and 247sports.com … major is foreign affairs.