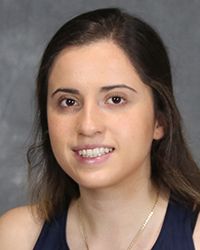 2021-22
• First-team All-MASC selection
• Compiled an overall record of 11-8 for the Cavaliers
• Tallied four victories over top-10 opponents
• Earned a victory over Georgetown’s Nina Thomas at the No. 1 position at the MASC Championships
• Advanced to the semifinal of her bracket in the Holleran Cup (CSA Individual B Draw)
• Picked up a three-game victory at position four in the Cavaliers’ upset win at No. 4 Columbia (11/14)
• Topped Caroline Spahr of No. 3 Princeton in four games, playing at the No. 3 position (11/20)

2019-20
• Competed in the top four of Virginia’s ladder throughout the season
• Concluded the year playing at the No. 2 position
• Recorded a 13-7 overall record
• Won all three of her matches in the team’s run at the Kurtz Cup
• Earned UVA squash’s Match of the Year award for her come-from-behind win in the match against Dartmouth
• Named to the ACC Academic Honor Roll

Background
• Pan American U19 champion and U19 Mixed Doubles runner-up
•  2018 Canadian Junior U19 Open champion
• Advanced to the Round of 16 at the 2017 and 2018 U.S. Junior Open Squash Championships, playing in the U17 and U19 age groups, respectively
• Ranked as the 26th junior squash player in the world according to the Professional Squash Association

Personal
• Daughter of Veronica Lopez and Gino Moya
• Has two brothers, Juan and Gino, and one sister, Veronica
• Psychology major