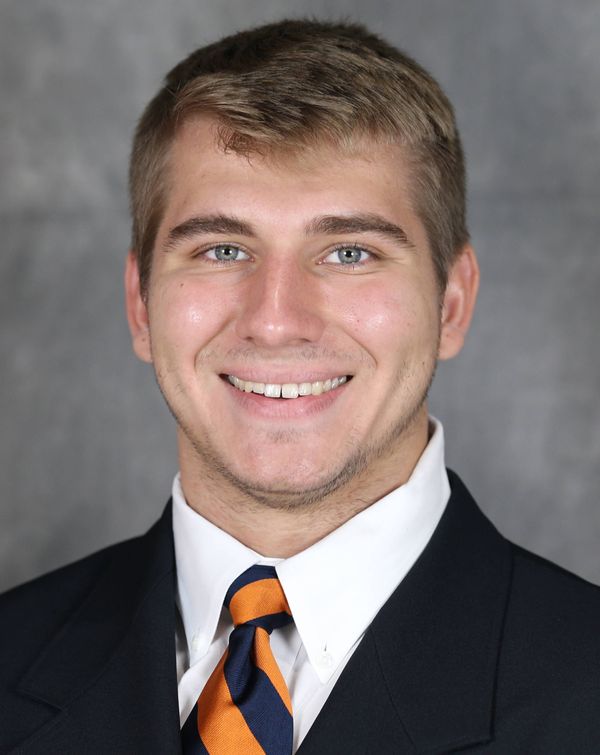 AT VIRGINIA
2020 – Appeared in all 10 of UVA’s games with two starts … made six tackles, notched a sack and returned a fumble five yards in the season-opening win over Duke … made one stop at No. 1 Clemson … made two tackles and 0.5 tackle for loss against NC State … made five tackles at Wake Forest … made four tackles and 1.0 sack at No. 11 Miami … made three stops in the win over Louisville … made four tackles and 1.0 sack against Abilene Christian … made five tackles, 2.0 tackles for loss, 1.0 sack, forced a fumble and broke up a pass in UVA’s win over Boston College … made eight stops at Virginia Tech … named to 2021 ACC Academic Honor Roll. 2019 – Appeared in all 14 of UVA’s games with four starts … made first career start at Pitt in the season opener and made three tackles, collecting his first career interception … made three tackles and 1.0 tackles for loss in the win over Florida State … made 10 stops, 1.5 tackles for loss and 0.5 sacks in UVA’s win over Old Dominion … made two stops at No. 10 Notre Dame … recorded five tackles and 2.0 tackles for loss against Duke … made one stop at Louisville … made two stops in win at North Carolina … notched two tackles in win over Georgia Tech … broke up a pass in the win over Liberty … made five tackles and notched 1.0 sack in Commonwealth Cup victory over Virginia Tech … his sack was one of three consecutive sacks by Virginia during a key defensive stand with less than a minute left to play … made two tackles and broke up two passes in the ACC Championship game against Clemson … made one stop in the Orange Bowl against Florida. 2018– Appeared in all 13 of UVA’s games … recorded three tackles against Ohio in Nashville … recorded one quarterback hurry at Duke … made one tackle and broke up a pass against North Carolina … made two tackles and 1.0 sack against Pitt … made two stops against Liberty … shared a sack with Chris Peace to close the first half of the Belk Bowl against South Carolina. 2017 – Appeared in seven of UVA’s 13 games … one of 17 UVA true freshmen to play … saw most of his time on special teams … made collegiate debut against William & Mary … made first career tackle against UConn … also made a stop at Boise State.

HIGH SCHOOL AND PERSONAL
Played linebacker at Highland Park High School for head coach Randy Allen … helped the Scots go 14-2 to win the 2016 5A D1 state championship … first-team all-district and an honorable mention all-state honoree by the Dallas Morning News … recorded 109 tackles, six sacks and two interceptions as a senior in 2016 … also caused five fumbles in 2016 … returned one interception for a touchdown … blocked two punts, one of which was recovered for a touchdown … honorable mention 5A all-state by the Texas Associated Press Sports Editors … named 2015 District 10-6A Defensive Newcomer of the Year … father, Brad, played football at Oklahoma State … rated a three-star recruit by ESPN.com, Rivals.com, 247Sports.com and Scout.com … double major in economics and religious studies with a minor in entrepreneurship … 2020-21 Ken Newsome Endowed Football Scholarship recipient.
Skip To Main Content