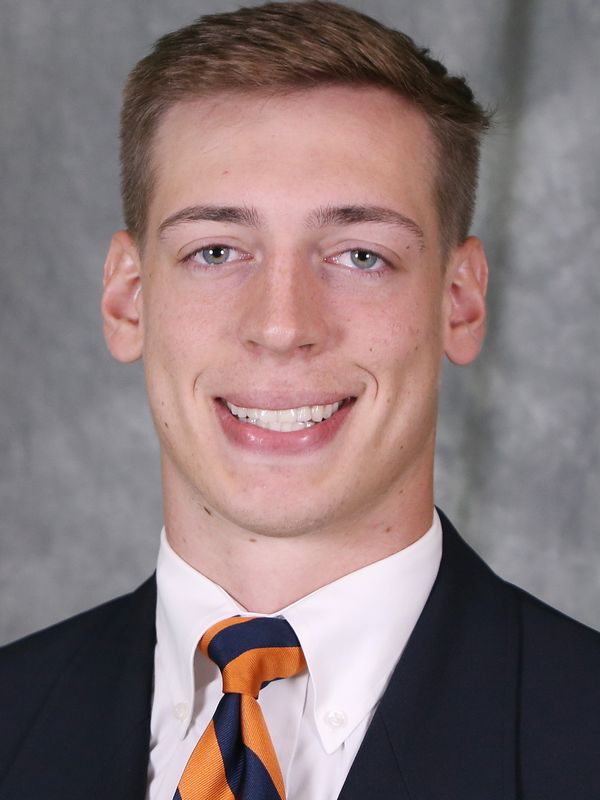 AT VIRGINIA
2020 – Appeared in four of UVA’s 10 games … made collegiate debut against Duke in the season opener … also saw time against Clemson, Abilene Christian and Boston College … named to 2021 ACC Academic Honor Roll.  2019 – Did not appear in any games.

HIGH SCHOOL AND PERSONAL
Played tight end and defensive end at Saint John Paul the Great Catholic for head coach Donald Turner (2017-18) and Jerry Sarchet (2018) … four-year letterwinner and a second-team all-state honoree in 2017 at defensive end … second-team all-state tight end in 2018 … set a single-season school record with 323 receiving yards as senior … tied a single-season school record with nine sacks as a junior … team captain as a senior … won the Wolf Award, which demonstrates the characteristics and ideals of the school on and off the field … also earned two letters in basketball where he helped JP to the state playoffs in 2019 and helped them win the Mount Vernon Tournament … also a team captain as a senior … member of the National Honor Society, the Spanish Honor Society, Principal’s Honor Roll and graduated with Highest Honors … volunteered with  Habitat For Humanity and Carpenter’s Shelter … cooked food for homeless at Carpenter’s Shelter … volunteered for the Special Olympics in Virginia and an alter server at local church … also a member of the church’s Pastoral Council, which oversees the operations of the church … son of Corrine and Michael Kosar … father, Michael, played football from 1979-83 at The Catholic University of the America … cousin, Richie Shaffer, played baseball at Clemson and was a 2012 first round draft pick of the Tampa Bay Rays, making his MLB debut with the organization in 2012 … cousin, Sean Pogorelc, is a junior on the football team at Carnegie Mellon … cousin, Chris Shaffer, played football at Appalachian State from 2011-13 … cousin, Brian McManus, played football at Bridgewater College from 2012-14 … can make maple syrup from scratch … loves to fish and caught a 104-inch, 170-pound striped marlin in Cabo San Lucas, Mexico … also caught a 65-inch, 143-pound halibut in Cook Inlet, Alaska … major is computer science.