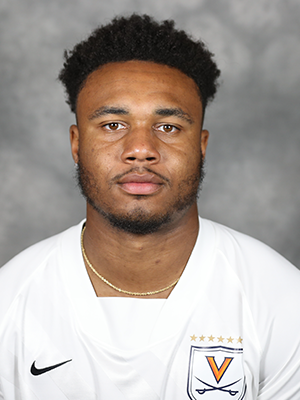 2022
• Started all 19 games for UVA in 2022
• Second-highest goal total among the Cavaliers with six on the season
• Ranks second on the team in points with 15
• Tied for second on the team with three assists
• Recorded the game-winning goal in Virginia’s comeback win over Virginia Tech (9/9/22)
• Scored his third career penalty kick goal to move into a tie for seventh all-time at UVA
• Set up a pair of game-winning assists against Pitt (9/30/22) and Wake Forest (10/22/22)
• Recorded a career-high five points against No. 10 Pitt and was involved in each of Virginia’s goals in a 3-1 victory over the Panthers (9/30/22)
• Unanimously selected by Top Drawer Soccer, College Soccer News, and the United Soccer Coaches as the National Player of the Week (Oct. 3)
• Named ACC Offensive Player of the Week (Oct. 3)

No. 24 Virginia Downs No. 25 Wake Forest, Goes Top of the ACC
Men's Soccer

No. 24 Virginia Battles Hofstra to a Draw
Men's Soccer

No. 24 Virginia Battles Hofstra to a Draw

Cavaliers Rally to Earn a 4-2 Victory Over Virginia Tech

Virginia Cruises to 4-0 Victory Over Rider