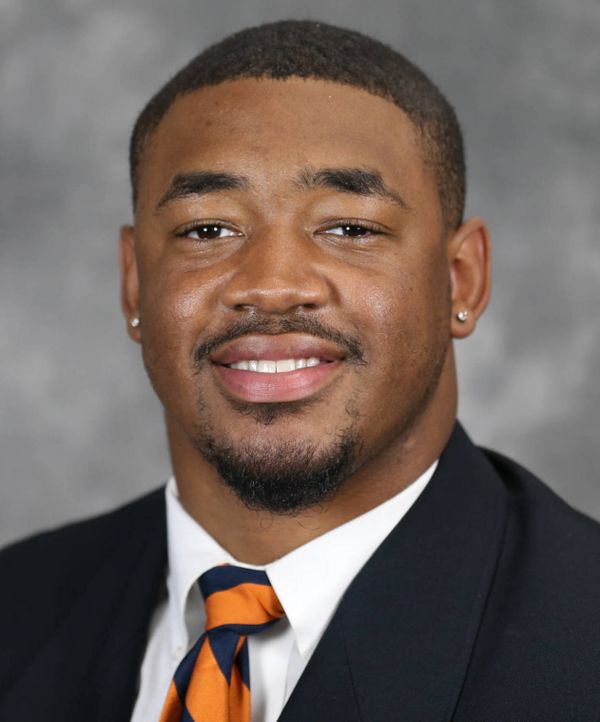 AT VIRGINIA
2020 – One of UVA’s four captains … started UVA’s first five games before being ruled out for the remainder of the year with a medical condition … made three tackles and collected a sack in season-opening win over Duke … made three tackles at No. 1 Clemson, including 2.0 tackles for loss and one sack … made three tackles, 0.5 tackles for loss and broke up a pass against NC State … made three tackles and 0.5 tackles for loss at Wake Forest … made four tackles at No. 11 Miami. 2019 – Appeared in all 14 of UVA’s games with six starts … started the season opener at Pitt and made two tackles and broke up a pass … made two tackles, including 0.5 tackles for loss in the win over Florida State … made four tackles and one sack in the win over Old Dominion … made one stop and one quarterback hurry at No. 10 Notre Dame … made two tackles and 1.0 tackles for loss at Miami … notched two tackles against Duke … made one tackle at Louisville … made two tackles in win at North Carolina … made one stop in win over Georgia Tech … notched three stops in the ACC Championship game against Clemson … made one tackle in the Orange Bowl against Florida. 2018 – Started the first three games of the season … after missing the Louisville game, it was announced he would miss the remainder of the season for medical reasons … made first career start on defense against Richmond in the season opener … recorded two tackles and 1.0 tackle for loss against the Spiders … notched four tackles at Indiana. 2017 – Appeared in all 13 of UVA’s games with three starts … made all three starts at tight end … moved to defensive end for the Military Bowl … made his first collegiate start against Indiana … caught second career pass at North Carolina for six yards … caught his second career touchdown pass on a two-yard pass at Pitt … made one tackle at defensive end against Navy in the Military Bowl … it was a shared tackle for loss with Joey Blount … made two tackles, 1.0 tackles for loss and forced a fumble against Ohio in Nashville. 2016 – Appeared in eight of UVA’s 10 games … injury suffered against then-No. 5 Louisville knocked him out for the rest of the season … also saw time as the long snapper on punts … scored two points against Central Michigan on a two-point conversion rush … tallied his first career touchdown and reception on the same play at Duke in the ACC opener on a three-yard catch. 2015 -Appeared in three of UVA’s 12 games … made collegiate debut at Pitt on special teams … missed the Georgia Tech, Miami, Louisville, Duke and Virginia Tech games with an injury.

HIGH SCHOOL AND PERSONAL
Played tight end and defensive end at Hickory High School for head coach Jupiter Wilson … rated a three-star recruit according to ESPN.com, Rivals.com and 247Sports.com … a two-star recruit by Scout.com … All-Conference 10 first-team honoree at tight end in 2013 and 2014 … played in the 757 All-Star football game on the East team … also can long snap … all-region honoree … named team MVP … also was a thrower in track and a forward on the basketball team … son of Richard and Laureen Burney … has two older sisters, Shauntee Parker and Richelle Dandridge … father Richard was a tight end and linebacker at Wisconsin from 1977-80 … played AAU basketball from 2011-14 … volunteer at the Jim O’Sullivan Football Camp … graduated with a degree in American studies … working on a master’s of education … 2020-21 Ed Armstrong Endowed Football Scholarship recipient.