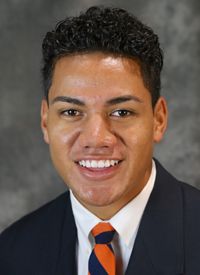 HIGH SCHOOL AND PERSONAL
Played running back at Punahou High School for head coach Kale Ane … rated a three-star recruit according to ESPN.com and Scout.com … rated a two-star recruit according to Rivals.com and 247sports.com … concluded career with 3,279 rushing yards and 52 touchdowns as a three-year starter for the Buffanblu … a first-team Honolulu Star-Advertiser all-state honoree after rushing 180 times for 1,107 rushing yards (6.2 yards per carry) and 18 touchdowns … as a junior rushed 130 times for 1,171 yards and 20 touchdowns in eight games … also caught 15 passes for 114 yards in 2014 … in 2014 he was the 2014 State Championship Impact Player of the Game and a member of the Honolulu Star-Advertiser, KHON Cover 2 and ScoringLive.com first-team all-state … member of Punahou’s 2013 state title team and 2014 runner-up squad … last name is pronounced Towel-LA-Papa … served a two-year LDS mission to Managua, Nicaragua … major is Spanish … recipient of the 2021-2022 T. David Fitz-Gibbon Football Scholarship