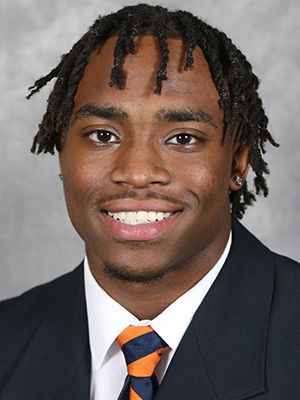 AT VIRGINIA
2021 – Appeared in 11 of UVA’s games… caught one pass for 65 yards and a touchdown against William & Mary… caught two passes for 25 yards against Duke. 2020 – Appeared in six of UVA’s 10 games … one of 12 UVA true freshmen to appear in a game … made collegiate debut against Duke in the season opener … caught first career reception for six yards against Louisville … caught two passes for 11 yards, including his first career touchdown against Abilene Christian … caught one pass against Boston College.

HIGH SCHOOL AND PERSONAL
Played wide receiver at East Nashville Magnet High School for head coach Brian Waite … caught 34 passes for 454 yards and five touchdowns as a senior in 2019 … carried the ball 12 times for 87 yards (7.3 yards per rush) and one score … earned Class 3A Region 4 honors as a wide receiver … team went 10-2 in 2019 and was ranked No. 5 in final 3A poll … Eagles advanced to second round of state playoffs … also runs track at ENMHS where he was all-state by the Tennessee Sports Writers Association in the 100m, 200m and 400m in 2019, his first year competing on the high school level … won state title in 400m with time of 48.3, was second in 100m (10.74) and third in 200m (21.8) … also plays basketball for ENMHS … a three-star recruit by ESPN.com, Rivals.com and 247sports.com … also plays on ENMHS basketball team … East Nashville Magnet is Nashville’s only Paideia high school … major is undeclared and is currently studying in UVA’s College of Arts and Sciences.