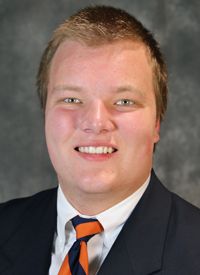 AT VIRGINIA
2020– Appeared in all 10 of UVA’s games with three starts … made first collegiate start at left guard against Abilene Christian following the season-ending injury to Dillon Reinkensmeyer … started the last three games of the season at left guard … part of an offensive line that ranked No. 1 in the ACC and No. 12 in the nation in tackles for loss allowed (4.2), while also ranking No. 2 in the ACC with 2.0 sacks allowed a game. 2019 – Appeared in 11 of UVA’s 14 games … has seen time at right and left guard, in addition to special teams … has helped block for quarterback Bryce Perkins, one of two quarterbacks in the nation with 3,000+ passing yards and 700+ rushing yards. 2018 – Did not appear in any games … redshirted season.