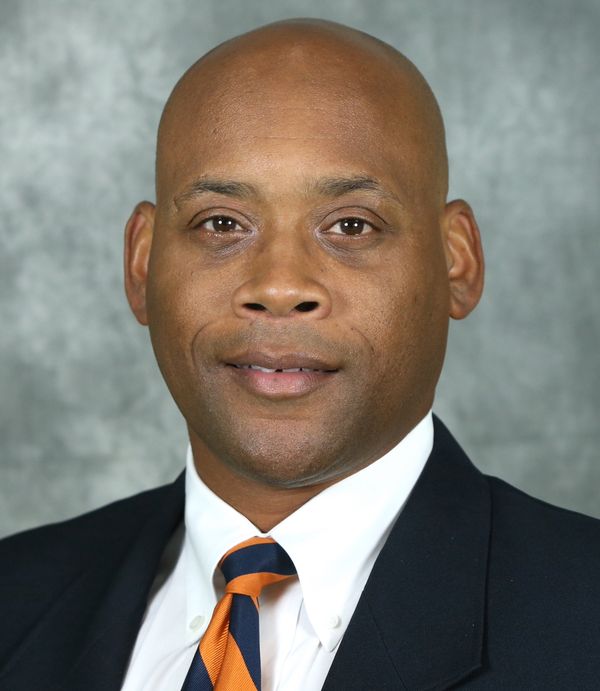 Desmond “Des” Kitchings joined the Virginia program in January of 2022 as the team’s offensive coordinator and will also coach the tight ends.

During the 2020 season, Kitchings guided Gamecocks’ running back Kevin Harris to the program’s first 1,000-yard rushing season since 2013. Harris gained 1,138 yards in 10 games and posted 15 rushing scores. An All-Southeastern Conference pick, he led the league in regular-season rushing and was seventh nationally. His five rushing TDs against Ole Miss set a South Carolina single-game record. It marked the fourth time in five seasons that Kitchings coached a 1,000-yard running back.

Kitchings, a native a Wagener, S.C., spent eight seasons coaching the running backs at North Carolina State. He had the additional duties as the tight ends coach in 2012, as the recruiting coordinator from 2014-18, as the assistant head coach for offense from 2016-18, and as the co-offensive coordinator in 2019.

Under Kitchings tutelage, NC State produced three-straight 1,000-yard rushers from 2016-18 for just the second time in school history. In 2016, Matthew Dayes was the first 1,000-yard rusher at NC State since 2002, and in both 2017 and 2018 first-year starters Nyheim Hines and Reggie Gallaspy Jr., also reached that mark.  Hines ranked fourth in the ACC with 1,112 rushing yards in 2017 and led the ACC in all-purpose yards with 143.7 yards per game, ranking 12th nationally, was named first-team All-ACC, the first Pack running back to earn first-team honors since 2002, and was selected in the fourth round of the 2018 NFL Draft. In 2018, Gallaspy tied the NC State school record with 18 rushing touchdowns, a mark that ranked fifth nationally. His 19 total TDs was also a new single-season best mark at NC State. He ranked 15th in the NCAA overall with 114 points scored.

Kitchings’ coaching career began at Furman, his alma mater, working as the tight ends coach and special teams coordinator from 2004-07. During his tenure, the Paladins went 10-3 and captured a conference title in 2004, and advanced to the NCAA I-AA national semifinals in 2005.

His next stop was in the SEC, working at Vanderbilt from 2008-10, including one season as the offensive coordinator. He was a key factor in the development of true freshman tailbacks Warren Norman and Zac Stacy, who ranked 1-2 on the team in rushing in 2009, with Norman producing one of the finest all-purpose campaigns ever by an SEC freshman.

He also spent one year (2011) at Air Force when the Falcons ranked third nationally in rushing averaging (314.8 yards per game) and in rushing touchdowns (43).

Kitchings was a standout receiver/return specialist at Furman. As a senior in 1999, he helped the Paladins to a Southern Conference title. He ranks among the school’s all-time leaders in receptions and returns, averaging 29.3 yards per kick return, the second-best mark in conference history, including a school-record four kick returns for touchdowns. He was a consensus all-Southern Conference selection as both a receiver and returner and earned All-America honors as a return specialist in 1999 after leading the NCAA I-AA division in return average.

The youngest inductee into the Furman Athletics Hall of Fame, Kitchings was selected by the Kansas City Chiefs in the 2000 NFL Draft, and spent four years on practice squads and rosters of NFL squads.

Kitchings, who earned a bachelor’s degree in health and exercise science from Furman in 2000, and his wife, Heather, have three children, Aiden, Ava and Austen.