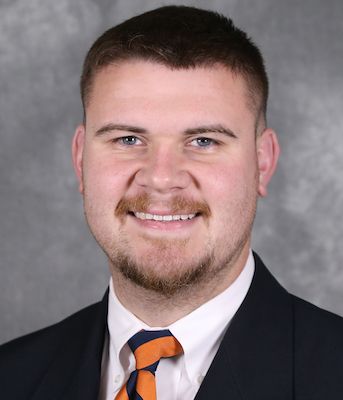 A former national champion as a team captain at Clemson, Jay Guillermo enters his first season as a graduate assistant on Tony Elliott’s staff.

Prior to arriving in Charlottesville, Guillermo served as the tight ends coach at Western Carolina under Mark Speir for two seasons. Guillermo captained the Tiger football team his final two years as a collegian and he was a part of the 2016 national championship squad.

As a part of the Panthers’ coaching staff, Guillermo helped Georgia State to a program-record seven victories in 2019, garnering the program’s first-ever bowl appearance at the Nova Home Loans Arizona Bowl in Tucson against Wyoming. Working primarily with the offensive line, he assisted with Georgia State’s best offense in school history, averaging over 245 rushing yards per game.

As a player at Clemson from 2013-16, Guillermo was a four-time ACC Offensive Lineman of the Week and twice received All-ACC accolades at center along the Tigers’ offensive line. He twice played in the College Football Playoff national title games. In 2016, Guillermo graced the watch list for the 2016 Dave Rimington Award which is presented each year to the top center in college football

Following his graduation from Clemson, Guillermo worked out for both the Buffalo Bills and Tennessee Titans in the NFL rookie minicamps before signing with the Toronto Argonauts of the Canadian Football League in late-May of 2017. He retired from playing in the summer of 2017.

Having graduated from Maryville High in Maryville, Tenn., where he was a two-time Tennessee state champion, Guillermo played for the Rebels for two seasons after transferring from Burns High in Lawndale, N.C. At Maryville, He earned the 2011 Tennessee Lineman “Mr. Football” award before taking his talents to Death Valley and Clemson. He returned to Burns High to begin his coaching career in 2017, serving as the varsity offensive line coach parlaying that into the graduate assistantship at Georgia State.

Guillermo is married to the former Ava Bell, who is from Radford, Va., and was a member of the Clemson Track & Field team