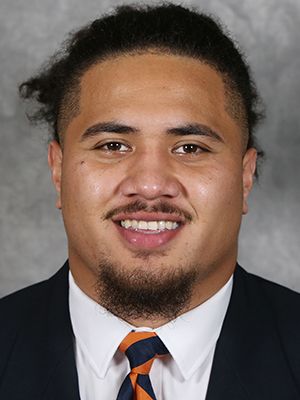 HONORS
2022 – All-ACC Honorable Mention … one of 85 players on the watch list for the Polynesian College Football Player of the Year Award.

AT VIRGINIA
2022 – Appeared in all 10 games, making nine starts … led the Cavalier defense with 8.5 tackles for loss … His 39 tackles were the most among UVA defensive linemen … Credited with four sacks and recorded either a half or solo sack in six of UVA’s 10 games … made an career-high eight tackles on Nov. 5 against then-No. 17 North Carolina. 2021 – Appeared in all 12 games for the Cavaliers and made six starts at defensive end … Totaled 23 tackles (13 solo), 3.5 tackles for loss, one sack and three quarterback hurries … Against North Carolina on 9/18 accumulated four tackles (2 solo) and a sack, the first of his career … At Louisville both of his tackles went for losses … Put forth another four-tackle effort (2 solo) against Virginia Tech 11/27 … 2020 – Did not appear in any games. 2019 – Appeared in all 14 of UVA’s games with five starts …  in the season-opening win at Pitt he
made two tackles, 0.5 tackles for loss and helped UVA limit Pitt to only 78 yards rushing … recorded two tackles, 1.0 tackles for loss and 0.5 sacks against William & Mary … notched three tackles and 1.0 tackles for loss in the win over Florida State … made four tackles, including a 0.5 sack in the win over Old Dominion … made one tackle and broke up a pass at No. 10 Notre Dame … made three tackles and broke up a pass at North Carolina … made one stop against Georgia Tech … made five tackles, 2.5 tackles for loss and 1.5 sacks in the win against Liberty … made seven tackles, 2.5 tackles for loss and 1.5 sacks in the Commonwealth Cup win over Virginia Tech … made four tackles in the Orange Bowl against Florida. 2018– Appeared in 12 of UVA’s 13 games with four starts … missed the Belk Bowl with an illness … one of 13 UVA true freshmen to appear in 2018 … one of eight UVA true freshmen to make collegiate debut in the season-opening win over Richmond … made one tackle against the Spiders … had one QB hurry at Indiana … recorded his first career sack against Louisville in the ACC opener … on the sack play he forced a fumble that Charles Snowden recovered for the Cavaliers … also had one quarterback hurry against the Cardinals … made first collegiate start at NC State and made one tackle … made one tackle and posted one quarterback hurry against No. 16 Miami … made one tackle at Duke … made one stop against North Carolina … recorded one tackle at Georgia Tech.

HIGH SCHOOL AND PERSONAL
Played offensive and defensive line at Kapolei High School for head coach Darren Hernandez … all-state honoree had 14 sacks, 20 tackles for a loss and 22 pancake blocks in 2017 … was a finalist for the 2017 Cover2Herman Wedemeyer Award for Iron Man Two-Way Player of the Year … named first-team all-state by Star-Advertiser … played in the Polynesian Bowl … one of the top performers from practice at the Polynesian Bowl … spent the 2016 season in Utah at Orem High School, earning All-Valley honors … was second-team all-region in 2016 at Orem… helped Radford High School in Honolulu win a state title as a sophomore in 2015 … nephew of Ta’ase Faumui, a former college football player at Hawaii and in the NFL with the Pittsburgh Steelers (1994-95) and Oakland Raiders (1997) … a three-star recruit by ESPN.com, Rivals.com, 247sports.com and Scout.com … major is American Studies