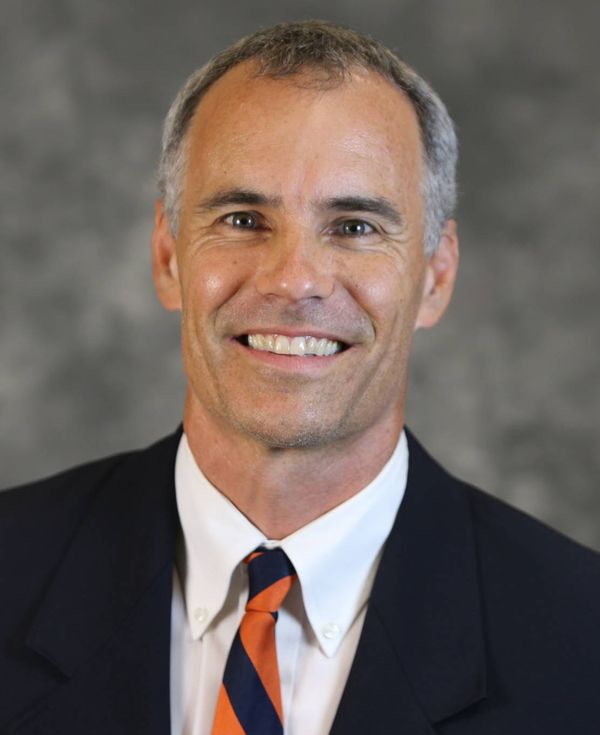 Lars Tiffany is in his sixth season as head coach of the Virginia men’s lacrosse program after being named its 17th head coach on June 21, 2016.

Last season, Tiffany guided fourth-seeded Virginia to its seventh NCAA title after a 17-16 triumphant victory over third-seeded Maryland at Rentschler Field (East Hartford, Conn.) on May 31. With no NCAA Tournament held in 2020 due to the coronavirus pandemic (COVID-19), UVA’s 2021 title marked the first time in men’s lacrosse program history it won back-to-back national championships, having done so in 2019. Under the direction of Tiffany in 2021, Virginia became just the seventh men’s lacrosse program in Division-I history to win back-to-back national championships and the first D-I men’s lacrosse program to win six straight games in the NCAA finals (1999, 2003, 2006, 2011, 2019 and 2021). Tiffany and the Cavaliers are currently riding an eight-game winning streak in NCAA tournament games, which is also a program record.

Tiffany and his staff also guided nine USILA All-American selections in 2021, including Jared Conners, who was named the nation’s most outstanding midfielder and a First Team All-American. In addition to Conners, Connor Shellenberger (1st), Petey LaSalla (2nd), Matt Moore (2nd), Kyle Kology (3rd), Payton Cormier (HM), Cade Saustad (HM), Alex Rode (HM) and Dox Aitken (HM) were all named USILA All-Americans. Virginia’s nine All-American selections tied for the most by any team in the nation in 2021. Shellenberger was also named the Most Outstanding Player of the 2021 NCAA Tournament, while Conners, LaSalla, Moore, Saustad and Rode were tabbed all-tournament selections.

Virginia was 4-2 during the 2020 season before it canceled by the NCAA on March 12 due to COVID-19. The shortened 2020 season saw Michael Kraus become just the fourth Cavalier to reach the 100-goal, 100-assist mark for a career.

The 2019 season was a special one for Tiffany as he brought both NCAA and ACC titles to Charlottesville. Virginia tied a program record with 17 wins in 2019 as the Cavaliers finished 17-3, winning their first NCAA title since 2011 and first ACC title since 2010.

Virginia’s offense hummed all season, finishing No. 7 in the country in three key categories: scoring offense per game (14.10), assists per game (8.60) and points per game (22.70). Virginia also finished No. 4 in the nation in scoring margin per game (3.85). Leading the way was Moore, who became the first player in program history to record 40+ goals and 40+ assists in the same season. Moore finished No. 1 in the ACC and No. 8 in the nation with 89 points (46-43). Dox Aitken, a First Team USILA All-American for the second-straight season, broke his own single-season UVA record for points by a midfielder (52). Aitken also became the only midfielder in program history to reach 100 goals for a career. Ian Laviano led the ACC and was No. 9 in the nation with 51 goals, which ranks No. 4 all-time at UVA on the single-season ledger.

Ryan Conrad, a First Team USILA All-American, was named the Senior CLASS Award winner for 2019, the second student-athlete to win the coveted award under Tiffany (Brown’s Jack Kelly, 2016). Conrad, a two-time captain, was MVP of the ACC Tournament and named to the NCAA All-Tournament team. He finished the year with 31 goals and 18 assists, which places him tied for No. 3 all-time at UVA in single-season points by a midfielder.

UVA was one of the nation’s most feared riding teams. UVA’s opponents cleared at .711 percent for the season, which ranked No. 2 in the nation behind Cleveland State’s .707 percent. UVA was also one of two programs to have a top 20 offense and defense, as the Cavaliers limited opponents to 10.25 goals per game, while scoring 14.10 per game. The scoring margin of 3.85 goals per game ranked No. 4 nationally and No. 1 in the ACC.

For the third year in a row, Tiffany’s Cavaliers team ranked No. 1 nationally in ground balls (41.55) in 2019. Defensively in 2018, Virginia led the nation with 38.0 ground balls per game and in 2017 averaged 43.33 ground balls per game, averaging nearly seven more ground balls per game then No. 2 Brown (36.56), Tiffany’s old program. Prior to Tiffany coming to UVA, his Brown squad in 2016 led the nation in ground balls as Tiffany’s staff three years in a row has led the nation’s best team on the ground. Goalie Rode was named Most Outstanding Player of the 2019 NCAA Tournament after going 4-0 with 43 saves between the pipes. Rode recorded 18 saves against Duke in the NCAA semifinal round and posted 13 saves against Yale in the NCAA final. Then-freshman LaSalla was stellar all season at the faceoff X, including going a perfect 6-of-6 in overtime periods. LaSalla, a College Crosse (SB Nation) Freshman All-Amercain (1st), finished No. 1 in the ACC with 100 ground balls. He also was No. 2 in the ACC and No. 21 in the nation with a .587 faceoff winning percentage. LaSalla’s 216 faceoff wins rank No. 2 in UVA’s single-season record book.

In 2018, Tiffany’s Cavaliers were No. 5 nationally in assists (7.72), No. 7 in points per game (20.33) and No. 7 in scoring offense (12.61). Michael Kraus became the third Cavalier in program history to reach 80 points in a season, finishing with 83, ranking No. 8 nationally. First Team All-American midfielder Aitken first set a midfielder program record with 51 points in 2018.

During Tiffany’s first season on Grounds his Cavalier offense finished No. 1 in the ACC and No. 3 in the nation in three offensive categories: goals per game (14.40), assists per game (9.13) and points per game (23.53). Aitken shattered UVA’s freshmen midfielder record of 29 goals and 40 points. Aitken broke the goals record in eight games. Attackman Kraus was named ACC Freshman of the Year and was the only rookie on the All-ACC team after leading UVA with 34 goals and 56 points.

Tiffany came to Virginia with 12 years of head coaching experience. He spent 10 years at Brown, his alma mater. He led the Bears to Championship Weekend in Philadelphia in 2016 behind a 16-3 record. The 16 wins in 2016 was a program record for the Bears. Brown’s offense was potent in 2016, leading the nation with 16.32 goals per game. Under Tiffany’s tutelage, nine Brown Bears earned All-America honors in 2016, while Dylan Molloy was the recipient of the 2016 Tewaaraton Trophy and was named by the USILA its most outstanding player and attackman of the year. Brown goalie Jack Kelly was named the nation’s most outstanding goalie and the winner of the 2016 Senior CLASS award for men’s lacrosse.

“Stepping into the seat as the head coach of the Virginia’s Men’s Lacrosse program brings both a tremendous exhilaration and responsibility,” Tiffany said after being hired. “I am very fortunate to have been entrusted with this program.  It is also clearly understood that the coaches and athletes of Virginia Lacrosse that have come before me have established a very high bar for measuring success in Charlottesville.  My staff and I are eager to begin working with the men as we establish the principles and guidelines of our aggressive, fast-paced system of play that relies upon uncompromising fitness, competitive fire and a passion, and joy, for the game of lacrosse.”

Tiffany guided his 2015 team to the number one seed in the Ivy League Tournament, an Ivy League championship and NCAA Tournament berth, changing the landscape of college lacrosse with a unique fast break offense that scored 237 goals, averaging 13.94 goals per game, fifth best in the nation.

Tiffany guided Brown to its second Ivy League Championship under his watch in 2010, while also earning a berth in the first-ever Ivy League Playoffs. His team also posted back-to-back winning seasons in 2013 and 2014.

In 2009, Tiffany coached Brown to its first NCAA Tournament appearance since 1997, before falling in overtime to Johns Hopkins in the NCAA First Round. His 2009 team posted a 12-4 record and was ranked as high as eighth nationally during the season, finishing the season as the 11th ranked squad in the nation.

Tiffany’s 2008 squad captured the Ivy League title with a 5-1 league mark, posting an 11-3 record to earn the most wins at Brown since 1994.  Brown, the number one ranked team in New England, finished 13th nationally in the final USILA coaches poll, with just six teams in the nation winning more games than the Bears.

In his first season at the helm of the Brown team, Tiffany turned the fortunes of the program in the right direction, guiding the Bears to a 7-7 record in 2007, and a national ranking as high as 18th.

Tiffany came to Brown from Stony Brook, where he was the head lacrosse coach in 2005 and 2006, posting an 18-13 overall mark. His 2006 squad finished second in America East with a 4-1 league mark and was ranked in the Top 20 in two weeks. In 2005, Tiffany’s Seawolves appeared in the Top 20 for the first time ever, and were ranked as high as 14th nationally. Tiffany, the 2005 America East Coach of the Year, led Stony Brook to wins over Penn State and Rutgers, as his Seawolves boasted the number-one ranked man-up unit in Division I.

Tiffany arrived at Stony Brook after successful stints at Penn State, Dartmouth, Washington & Lee and LeMoyne. He spent his four years at Penn State (2000-2004) as the top assistant under head coach Glenn Thiel, and was involved in all facets of the lacrosse program as the team’s defensive coordinator and recruiting coordinator. Tiffany’s defensive units were outstanding during his four years, and in 2002, the Nittany Lions led the nation in man-down defense.

Tiffany began his collegiate coaching career at LeMoyne College, where he served as an assistant coach of men’s lacrosse and co-head coach of the women’s lacrosse program from 1994-96. A native of LaFayette, N.Y., Tiffany graduated from LaFayette High School where he lettered in football, basketball and lacrosse. Upon graduation from Brown, he taught biology and coached lacrosse and football at the Robert Louis Stevenson School in Pebble Beach, Calif., from 1990-94.

A 1990 graduate of Brown, Tiffany was a two-time team captain and starter on defense for three years. Tiffany played for former Virginia head coach Dom Starsia at Brown. A Biology concentrator, Tiffany played on two Brown teams that advanced to the NCAA Tournament (1987 & 1990). He was Co-MVP of the Brown squad that captured its first-ever NCAA playoff victory in 1990 (12-9 vs. UMass). Tiffany capped his career by playing in the North-South Senior All-Star game.