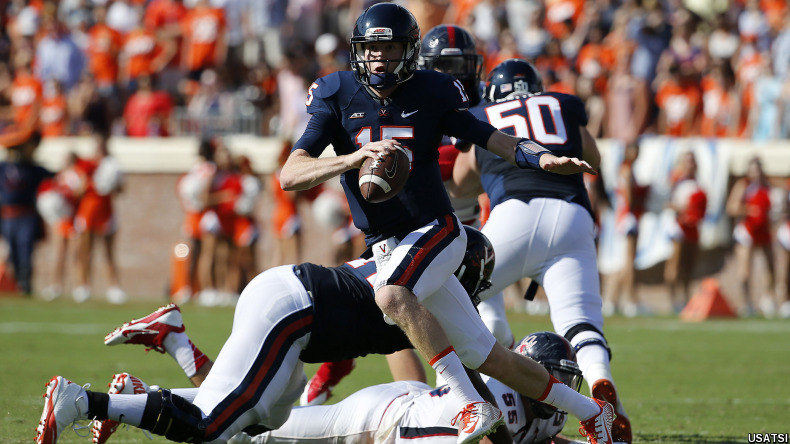 CHARLOTTESVILLE, Va. (AP) – As Virginia defensive end Eli Harold was getting ready to shake hands with Richmond players after the Cavaliers’ 45-13 victory on Saturday, assistant coach Marques Hagans hit him with this:

It had been 350 days since the Cavaliers last shook hands as winners.

“It just feels good to get that taste out of your mouth,” Harold said.

Matt Johns and Greyson Lambert each led two touchdown drives and Harold turned one of seven Richmond turnovers into a 22-yard touchdown return as the Cavaliers ended a 10-game losing streak. It dates to last September when they beat VMI, like Richmond, a member of the FCS.

It hardly mattered after finally ending the slide.

Johns, whose effectiveness last week in relief of starter Lambert reopened the Cavaliers’ quarterback competition, threw a 4-yard touchdown pass to Canaan Severin and hit Darius Jennings for 45 yards to set up another score.

Lambert, a team captain who started for the second week in a row, directed a 14-play, 76-yard drive to Kevin Parks’ 3-yard touchdown run in the first quarter, then threw a 29-yard scoring pass to Severin early in the fourth quarter.

Johns finished 4 for 7 for 65 yards with a TD and an interception. Lambert was 13 of 15 for 102 yards with the TD, and both said winning matters more to them than who gets to lead the way.

“All we want to do is win,” Johns said. “That’s all we really care about.”

The Spiders (1-1) arrived with two former quarterbacks and in search of their third victory against a school from the FBS, but were quickly overmatched by the Cavaliers’ pressure defense. They turned the ball over seven times, leading to 21 points, and were sacked four times.

“That was one of those old-fashioned butt whoopings, so I’ll just take that like a man and go from there,” coach Danny Rocco said, adding that he came away impressed by Virginia’s defense.

“They have a chance to do some damage. I think they’ve got some real confidence and swagger,” he said.

Michael Strauss, who began his career at Virginia but transferred after one season, was 24 for 36 for 266 yards for the Spiders, but threw two interceptions and fumbled twice while being sacked, leading to two Cavaliers touchdowns. On the second fumble, caused by Max Valles, Harold scooped it up and scored, making it 31-6.

The Spiders also lost the ball when T.J. Moon fumbled near the Cavaliers goal line just before halftime with Richmond poised to pull within 14-10. Linebacker Henry Coley stripped him and Brandon Phelps recovered, and the Cavaliers made it 21- 3 coming out of the locker room.

The game also featured the return of former Virginia quarterback Michael Rocco to Scott Stadium. Rocco started every game for Virginia in 2011, leading them to an 8-5 record and the Chick-fil-A Bowl, but transferred when he was forced to share the job after the following season.

Rocco guided the Spiders to their lone touchdown, capping a 71-yard drive with a 6-yard run, but he also threw an interception and fumbled the ball away late in the game when it slipped out of his hands as he cocked his arm to throw.

London gave no clue as to whether either of his quarterbacks has gained an upper hand, saying he will watch film and continue to evaluate both in practice.

David Watford, who started all last season at quarterback for Virginia, played the final few series.