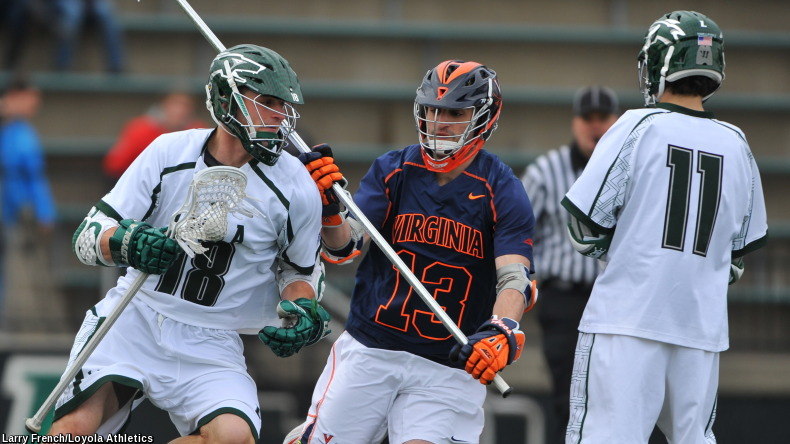 “People who don’t want us to start the season this early will miss games like this,” said Virginia men’s lacrosse head coach Dom Starsia. “We knew that Loyola was never going to go away. I am very proud of our team. We have been through a lot this past week or so. You lose a player of Tanner Scales ability and you have to mix and match the pieces. With the newness we have, starting at the faceoff X and moving back toward the defensive end, it was really hard to anticipate how we were going to react in every situation and I thought we battled the whole game. That is what I am most proud of.”

Scales, a preseason first-team All-American at defense, was lost for the season last week with an injury and all three starters on UVa’s close defense against Loyola made their first collegiate starts (Scott Hooper, Logan Greco and Davi Sacco). Hooper and Greco also made their collegiate debuts.

UVa used a four-goal run in the third quarter to break open a 6-6 game. Greg Coholan scored two of his career-high four goals to start the spurt. Matt Emery scored his first career goal and Zed Williams capped the run on a laser that found its way between the legs of Loyola goalie Pat McEnerney, giving the Cavaliers a 10-6 advantage at the 6:32 mark in the third quarter.

Loyola came roaring back, cutting its deficit to one goal, 12-11, after back-to-back goals by Romar Dennis. The second goal came with 4:30 left in the game and capped a 5-2 run by the Greyhounds. Williams gave UVa just enough breathing room with his unassisted goal with 3:11 left in the contest.

The Greyhounds managed another goal at 2:04 by Zach Herreweyers, but it wasn’t enough. In the final seconds Loyola’s Nikko Pontrello turned the ball over to Virginia with 29 seconds left. Loyola, however, received the ball back on a turnover by UVa goalie Matt Barrett with 13 seconds left. Logan Greco caused a turnover with six seconds left, giving UVa the ball back, but he lost it almost immediately. Pat Frazier picked up the ground ball for Loyola and his desperation shot went high as time expired, securing the win for Virginia.

The game started quickly for Loyola. The Greyhounds did not waste any time, scoring off the opening faceoff. Ryan Fournier picked up the faceoff ground ball from the wing and streaked to the goal seven seconds into the game, giving Loyola an early 1-0 lead. Ryan Tucker put UVa on the board for the first time this season with his unassisted goal at 12:36, tying the score at 1-1.

The first half featured the each team countering with haymakers, as the score was knotted at 6-6 entering the intermission. UVa and Loyola traded goals most of the half until back-to-back scores were tallied by Zed Williams and Joe French. The goal by French gave the Cavaliers a 5-4 lead with 6:50 left in the second quarter.

Loyola reacted quickly, scoring two straight goals of its own, retaking the lead 6-5. Romar Dennis capped the Greyhounds’ run with 4:48 left in the first half. UVa’s Owen Van Arsdale evened the score on a Greg Coholan pass with 3:21 left. In the final seconds of the second quarter Coholan tried to deposit another goal into the cage, but was stuffed by McEnerney, the Loyola goalie.

Dennis and Herreweyers led Loyola, each scoring three goals in the losing effort.

Virginia returns to action on Saturday, Feb. 14 when No. 16 Drexel comes to Charlottesville. Faceoff is set for 5:30 p.m.