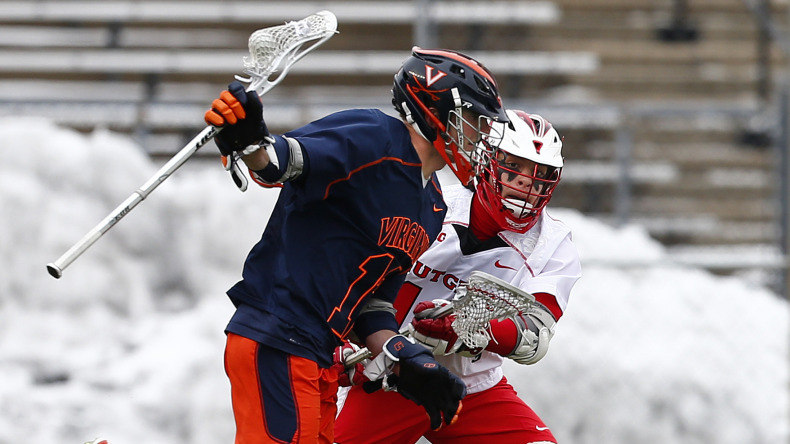 PISCATAWAY, N.J. – Zed Williams scored a career-high four goals and assisted another to help propel No. 6 Virginia (3-0) to a 14-5 road win over Rutgers (1-2) on Saturday afternoon, inside High Point Solutions Stadium. For the second consecutive week snow started to fall at halftime and the Cavaliers accelerated through it in the second half to secure UVa’s third win of the season.

“I was really glad to come on the road in these conditions and get a win like this,” said Virginia men’s lacrosse head coach Dom Starsia. “I don’t think we played a clean game. I thought we struggled a bit offensively in the first half and our defense kept us in it. Matt Barrett played very well and I thought our two face-off guys really battled the whole day against one of the best face-off kids in the country. It was a team effort. It was not pretty, but we were working hard the whole time and it was a good W for us.”

The first half was all Williams as the sophomore midfielder tallied a hat trick to help give UVa a 6-1 lead entering the intermission. Williams started the scoring with an unassisted score at 9:58. Matt Emery followed up with his second goal of the season at 8:54. Zack Sikora put Rutgers on the board with a transition goal at 5:11.

Christian Trasolini got things going for Rutgers in the third quarter with a goal 55 seconds into the period. UVa reciprocated with three straight goals, the first by Williams, followed by Greg Coholan and Owen Van Arsdale capped the run with a goal at 7:25.

Rutgers went on a mini 3-1 run with three Scarlet Knight goals by Scott Bieda, his third capping the run with 8:03 left in the game. The run left UVa’s lead at 10-5. The Cavaliers sprinted to the finish line, scoring the last four goals of the game to secure the victory. Pannell and Coholan each scored a goal to start the streak and Ryan Lukacovic closed the win with back-to-back goals.

Virginia returns to action at No. 2 Syracuse on Sunday, March 1. Faceoff at the Carrier Dome is set for noon and the game will be televised live on ESPNU.