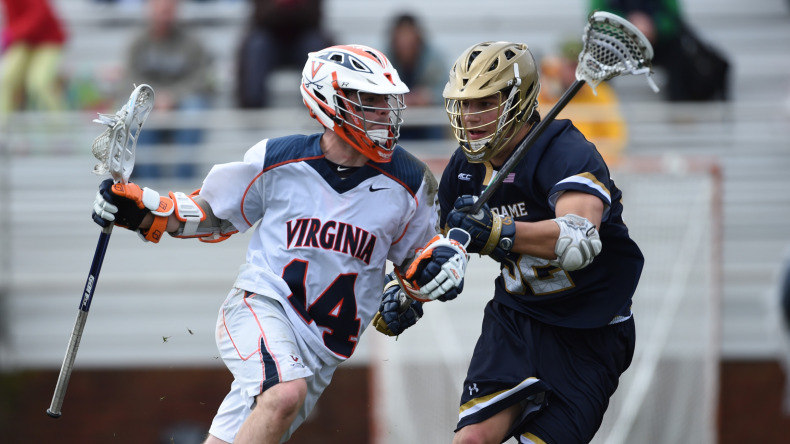 “It was a good effort,” said Virginia men’s lacrosse head coach Dom Starsia. “I think this team has some really special qualities, but at the same time I thought we just stood around and watched Notre Dame for the first twenty minutes or so. I thought we were soft early in the game, and then we got going at both ends of the field. We were pushed around on the ground ball game, we were standing around on defense and it just took us a while to get going. I thought, again, with a team this new, it’s not just a coach talking about trying to get better – I thought we got better as the game went on. We’re all big boys here and we’re here to win games. We just dug ourselves too deep of a hole and couldn’t climb our way out.”

The Cavaliers owned the second half, but it wasn’t enough to overcome the early deficit. Doyle scored for Notre Dame at 9:10 in the third quarter, giving the Irish a 9-2 lead. UVa reeled off a 7-2 run to finish the game. Tucker, Owen Van Arsdale and two goals by Coholan were part of a four-goal spurt for UVa that brought the score to 9-6 with 12:18 left in the game.

Doyle and Wynne scored back-to-back goals at 11:41 and 5:53 in the fourth quarter to give the Irish the final two-goal differential. Ryan Lukacovic, Coholan and Tucker scored in UVa’s final 3-0 run. Tucker scored at 3:02 to finish the game’s scoring. The Notre Dame’s defense clamped down and held UVa to nothing offensively over the final 3:02.

The Cavaliers are back in action on Sat., March 21 at Johns Hopkins. The battle for the Doyle Smith Cup commences at 6 p.m. The game will be televised live on ESPNU.

Antrassian Making Most of UVA Experience