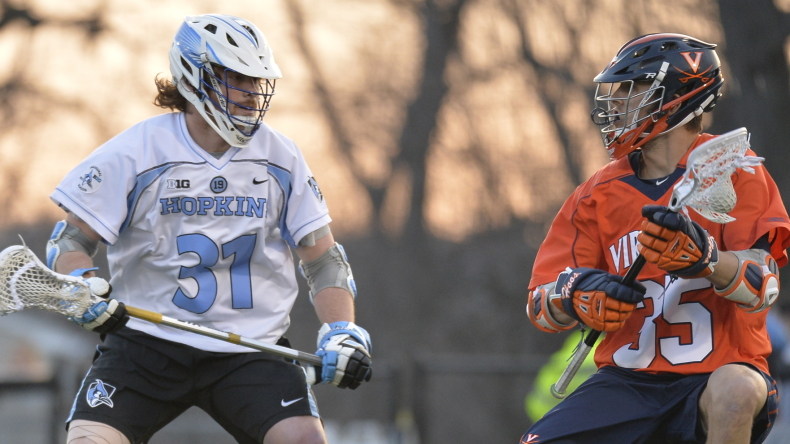 BALTIMORE, Md. – No. 7 Virginia (6-2) scored two goals in the final 1:34 of regulation to force overtime and Greg Coholan’s sudden-death tally lifted the Cavaliers past No. 19 Johns Hopkins (3-5), 16-15, Saturday night at historic Homewood Field.

The win also secures UVa’s possession of the Doyle Smith Cup, the spoils awarded to the winner of the regular season matchup between the Cavaliers and Johns Hopkins. UVa wins the cup for the second year in a row after losing it three times between 2011-13. UVa held onto the cup from 2006-10, the first five seasons the cup went to the regular season winner in the series.

“That was a great lacrosse game,” said Virginia men’s lacrosse head coach Dom Starsia. “Credit to Johns Hopkins for playing a great game. If the result had been the other way I was prepared to tell my team in the huddle after the game that I really enjoy this group. I love what they bring to practice every day and the effort that they bring to the games with what we are doing. We have to work extremely hard to get things done, but we are willing to do that. We were down two late there and things didn’t look great, but we were composed in the huddles and had a plan going out. We were able to execute to get the goals we needed to win.”

UVa trailed 15-13 when Tyler German took a Ryan Tucker pass and scored at 1:34 to cut the Cavalier deficit down to one goal, 15-14. Johns Hopkins won the ensuing faceoff. After a Blue Jay timeout, Conor Reed lost the ball when double-teamed by Will Railey and Michael Howard behind the cage. Howard picked up the ground ball and UVa safely cleared. Tucker then fired home the game-tying goal with 46 seconds left.

Jason Murphy won the following faceoff for UVa and while German picked up the ground ball Hopkins’ Michael Pellegrino slashed him. With the extra-man situation, UVa held the ball to run out the clock to force the extra frame and guarantee possession of the ball to start the overtime period.

At 2:29 UVa’s Ryan Lukacovic found Coholan for the game-winning score in overtime. Coholan’s man fell on a slide to Lukacovic and after the pass made its way back, the junior scored the overtime game-winning goal against Johns Hopkins for the second year in a row. Last year at KlÃ¶ckner Stadium Coholan’s goal lifted UVa over Johns Hopkins, 11-10.

The game started in UVa’s favor when the Cavaliers scored the game’s first three goals to take a 3-0 lead. Coholan, AJ Fish scored back-to-back goals and then Tucker capped the run at 10:18 in the first quarter with his unassisted goal.

Johns Hopkins scored six unanswered goals to storm out to a 6-3 lead. Cody Radziewicz capped the Blue Jays’ run with an unassisted goal at 12:06 in the second quarter.

The Cavaliers retaliated with their second 3-0 run to tie the game, 6-6, going into the intermission. Tucker started and finished the run with goals, while Tyler German also scored during the spurt. Tucker’s third goal of the game at 5:47 in the second quarter finished the run.

The third quarter was even as each team traded two goals each and by the time Joe Tinney scored with one second left in the period the game was tied again, 11-11.

A 4-2 run by Johns Hopkins, capped by Holden Cattoni with 4:43 left in the game gave the Blue Jays the late 15-13 lead, setting up UVa’s late heroics.

Virginia returns to action on Tuesday when the Cavaliers head to Lexington, Va., to face VMI. Faceoff is set for 7 p.m.