No. 8 UVa Cruises to Victory Over In-State Foe Richmond, 14-7 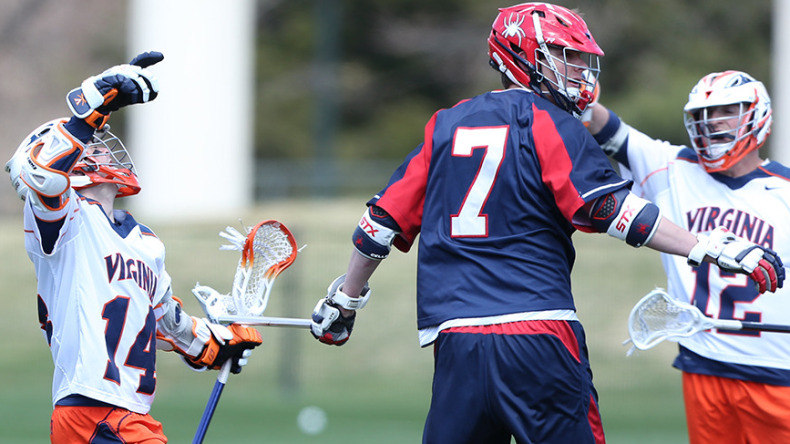 CHARLOTTESVILLE, Va. — Senior attackman Owen Van Arsdale had five goals and senior midfielder Ryan Tucker tallied four of his own to pace No. 8 Virginia (8-2) to a 14-7 triumph over in-state foe Richmond (6-4) on Saturday afternoon, inside KlÃ¶ckner Stadium.

“It could have been a complicated game,” said Virginia men’s lacrosse head coach Dom Starsia. “But, we didn’t allow it to be that way. We stayed on it, we got better when the ball was on the ground and we shot the ball well.”

Tucker put UVa on the board early with an unassisted goal at 13:04 in the first quarter.Â  Dan Ginestro tied the game, 1-1, when he scored unassisted at 8:18. Tucker retaliated with back-to-back goals to secure the first quarter hat trick and start UVa on a 9-1 run.Â

UVa entered the intermission with a 9-2 lead after Van Arsdale scored with one second left on the clock.Â  Tyler German scored at 14:10 in the third quarter, giving UVa a 10-2 lead, capping that 9-1 Cavalier spurt.

Richmond held a narrow 5-4 advantage in scoring over the final 26:17 of the game, but it wasn’t enough as UVa emptied its bench and stopped pushing the ball on offense.

“This has been a really fun group to be with,” said Starsia.Â  “We have been getting after it on a daily basis and it is nice to see it manifest itself on game day, and I feel like we are getting better. Some of our young defensemen are stepping up and we were better at getting the ball off the ground and better at facing off today. Those things will make a difference as we go forward.”

Virginia returns to action on Friday, April 3 when No. 4 North Carolina comes to KlÃ¶ckner Stadium. Faceoff is set for 7 p.m. and the game will be televised live on ESPNU.