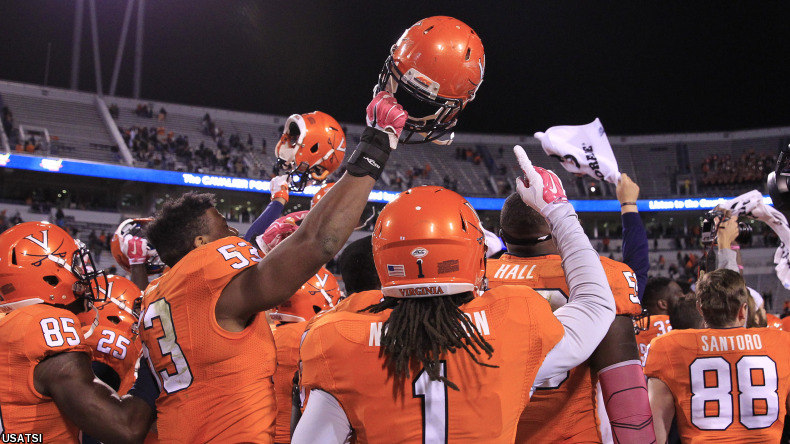 CHARLOTTESVILLE, Va. (AP)– Matt Johns was at a loss for words, and so the first thing he did was laugh.

”It’s hard to describe how much we needed that,” Virginia’s quarterback said after the Cavaliers rallied to pull even on the final play of regulation and then beat Syracuse 44-38 in three overtimes Saturday night. ”Just morally, physically, mentally, just everything.”

The victory snapped a two-game losing streak for Virginia (2-4, 1-1 Atlantic Coast Conference), and came in a way that coach Mike London said he hopes can provide a springboard of confidence and similar success as the Cavaliers head into the second half of the season.

First, they drove 88 yards in 19 plays, eating up the final 6:52 on the game clock, to Ian Frye’s tying 25-yard field goal as regulation expired. Then, they traded touchdowns with the Orange through two overtimes before stuffed them in the third for the victory.

They even got a call to go their way to make the tying drive possible. It arrived in the form of a face-masking penalty against the Orange as Albert Reid was tackled for a 6-yard gain on third-and-15 at the beginning of the drive. The additional 15 yards kept the drive alive.

”I remember looking up and saying, `Thank you, big guy. I appreciate that,”’ London said.

In the third overtime, Jordan Ellis scored on a 3-yard run after Virginia held Syracuse to a 48-yard field goal try that missed. The Cavaliers sacked Eric Dungey for a 6-yard loss on third-and-10 from the 25 to force the long kick, which would have been Murphy’s career-best.

The play left Dungey, a freshman, disgusted with himself.

”I saw the pressure coming and I should have gotten rid of the ball,” he said. ”It’s frustrating.”

It didn’t help the Orange that overtime went quickly, not allowing their defense to rest after Virginia’s regulation-ending drive.

”I thought they kept playing hard,” Orange head coach Scott Shafer said. ”It was hard to tell from the sideline angle, but any gas they had, they left it on the field. … The kids are exhausted, that’s for sure, especially the defense.”

The second overtime went quickly. Virginia scored in three plays, with Taquan Mizzell running the last 13 yards for the touchdown. Syracuse, starting at the 12 because of a Virginia penalty, needed just one play as Dungey rolled right and found Steve Ishmael just inside the right pylon.

Syracuse got the ball first in overtime and needed just five plays, with Dungey hitting Ervin Phillips with a 7-yard touchdown pass. A targeting foul against Zach Bradshaw on the play forced Virginia to start its drive at the 40, and on third down, Johns rolled right and hit Canaan Severin for 36 yards and the tying touchdown.

Virginia trailed most of the game, but got the ball with 6:52 left in regulation and used it all to tie it. The drive covered 88 yards in 19 plays, was highlighted by Johns’ 11-yard pass to Mizzell on fourth-and-3 from near midfield and ended with Frye’s 25-yard field goal.

Trailing 14-7 with the momentum on Virginia’s side, the Orange turned to a trick play to get it back. It came out of a punt formation on a fourth-and-4 from the Syracuse 43 when punter Riley Dixon took two steps sideways as if to execute a rugby-style kick, then tucked the ball and ran for 15 yards. Five plays later, Jordan Fredericks scored from the one, pulling the Orange even at 14 with just 62 seconds left in the half.

Starting at its 20, Johns hit Mizzell for 19 yards on the next play, threw two incompletions and then had an attempted screen pass tipped at the line and intercepted by Qaadir Sheppard, who returned it to the Cavaliers’ 26 with 32 seconds left.

On the next play, Dungey dropped back, saw the middle of the field open and took off. He didn’t meet a defender until inside the 5 and, after hurdling safety Quin Blanding, fell into the end zone for the touchdown.

Virginia scored two touchdowns in a span of four plays to go ahead 14-7.

Mizzell’s 11-yard run capped a 75-yard drive, and three plays later, Dungey was hit as he prepared to throw. The ball traveled several yards in the air, and Wilfred Wahee scooped it up and returned it 32 yards.

The officials signaled a touchdown, and it stood when replays couldn’t conclusively prove otherwise.

Mizzell also had a hand in Syracuse’s first touchdown. After catching a screen pass, he was hit by Donnie Simmons and fumbled, the ball bouncing to Antwan Cordy, who sprinted 44 yards down the sideline for the touchdown.

The Orange lead could have been larger, but after driving to a first down at the Cavaliers’ 2 in the opening quarter, a botched snap cost them 7 yards, and Virginia stuffed third- and fourth-down runs from the one.

Virginia Advances to NCAA Second Round