Taulapapa Getting Back Up to Speed

CHARLOTTESVILLE – He left his native Hawaii in June 2016, heading to Nicaragua to begin a life-changing journey. About four months earlier, Wayne Taulapapa had signed a football letter of intent with the University of Virginia, but he’d decided to put college on hold.

A 5-9 running back from Laie on Oahu’s North Shore, Taulapapa (pronounced Towel-LA-Papa) did so with the full support of UVA’s coaches. Most of them, like Taulapapa, belong to the Church of Jesus Christ of Latter-day Saints. LDS members have the option of serving on two-year mission trips, and Taulapapa, after prayerful deliberation, chose to begin his after graduating from Punahou School in Honolulu in the spring of 2016.

“A two-year mission to me is so formative in these kids’ lives and their futures,” said UVA head coach Bronco Mendenhall, whose oldest son is currently on an LDS mission trip, “and I think benefits them in every way, including their college football careers.”

For two years, Taulapapa’s diet consisted mostly of beans and rice, and when he returned from Nicaragua in May 2018, he was about 15 pounds lighter than when he’d left. He was immeasurably more mature.

“There’s a lot of things that I learned to do for myself, a lot of things that I experienced that I don’t think I would have experienced anywhere else,” said Taulapapa, who turned 21 last month. “More than anything, I learned to trust God more in all that I did. Being by yourself is very challenging, especially when you’re so far away from your family and not able to talk to them every day like you’re used to. So getting out of my comfort zone allowed me to grow maturity-wise.” 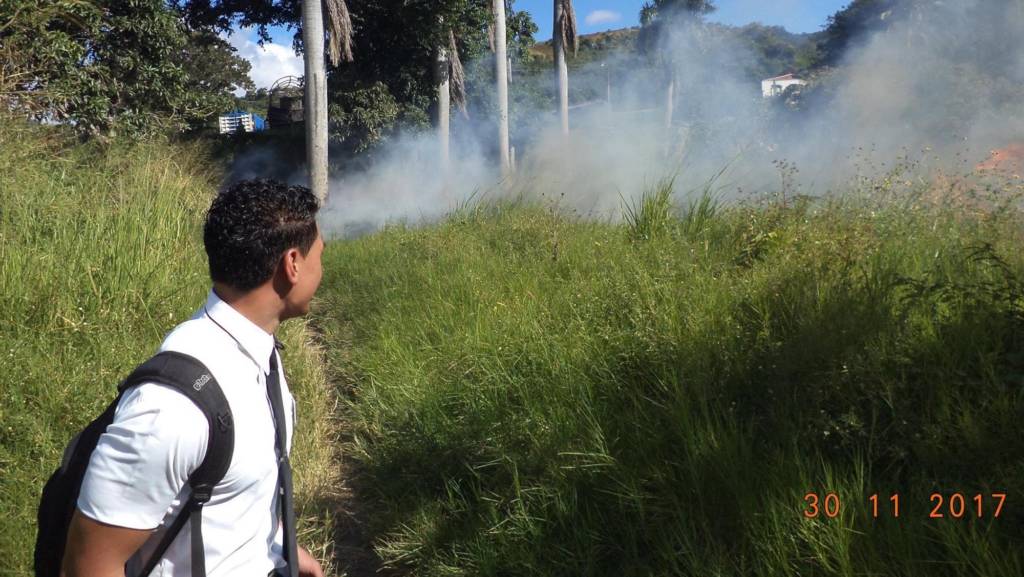 Wayne Taulapapa in Nicaragua
On the football field, he’s made remarkable progress since enrolling at UVA last summer. Taulapapa played only on special teams as a true freshman last season, appearing in the Cavaliers’ final eight games, but this spring he’s established himself as a candidate to start at running back.

“We have three things we talk about a lot here,” Mendenhall said, “which are durability and consistency and production, all three, and that’s what he’s done. He performs every day, he’s here every day, and he’s producing every day, more so right now than his competitors.”

His position coach at UVA, Mark Atuaia, understands the challenges Taulapapa faced after two years away from football. Atuaia left BYU after his freshman year to serve an LDS mission in Tucson, Ariz., near the border with Mexico. He returned to BYU in 1994.

For a missionary, Atuaia said this week, the “focus is not on you, it’s on the people that you’re serving. For me, the toughest part was getting back into physically doing it. You can try to simulate [the regimen of a college football player], but it’s not the same thing. And so it takes roughly about eight to nine months to get back to where you previously were before you start to ascend. It takes a while for your body to get used to working out again.”

In Nicaragua, Taulapapa served in five cities: Ciudad Dario, Puerto Cabezas, Esteli, Léon and Managua. Missionaries are “not given any time to really work out,” he said, but he did pushups and situps every day, trying his best to stay in shape.

Also, Taulapapa said, “I bought a jump rope within the first couple months, and some family members sent me some [agility] ladders, so when I had time I’d set it up in the house, in the kitchen area, and try to do agility drills.”

Throughout his mission trip, he worried about the transition that awaited him back in the United States.

“A lot of times I would just think to myself, How am I going to do when I come back? What’s going to be the mood when I get back? Am I still going to love football as much as I did?” Taulapapa said. “But I think the distance and the restriction of football really kind of moved my passion toward it. It got me up every morning to do my exercises. Got me making weights that didn’t even know were possible to make.”

A man in Nicaragua showed him how to make concrete weights, Taulapapa said. “You’d take jugs, fill them up with concrete, let it dry in the sun, and then you’d rip off the jugs later.

When he arrived in Charlottesville last summer, he started training under the supervision of Shawn Griswold, UVA’s director of football development and performance.

“Physically, it was very tough,” Taulapapa said. “Coming back I couldn’t run as fast as the classmates that I came in with. I wasn’t as strong. My endurance level was very weak, I would say. Lifting weights-wise, I wasn’t as strong as any of them, and it wasn’t even close.

“Mentally, I also felt very weak, considering the fact that I had lost all the fundamentals of football, and the IQ of it.”

During his mission trip, Taulapapa said, he had little contact with “the outside world, especially in Nicaragua. You don’t have too much interaction with what happens in the United States at all. But we were allowed to speak with our parents and families once a week through email. We were allowed one hour to email them every Monday, which was our preparation day or day of relaxation. So I was always excited to get updates on how my family was, how my friends were doing.”

He followed UVA football as best he could from Central America. In 2016, the Wahoos’ first season under Mendenhall, they finished 2-10. They improved to 6-7 in 2017 and advanced to a bowl game for the first time in six years.

“The second year I saw them progress greatly,” Taulapapa said, “and that was exciting, even though the Internet was very limited, so I couldn’t see a whole lot. But the things that I heard and read about [the Cavaliers] were really exciting, so I was excited to come here.”

On Mondays, he’d play soccer whenever possible, and that helped his footwork. Still, Taulapapa said, when he arrived at UVA he lagged well behind his teammates, and “it was very tough making the transition back. But our strength and conditioning staff and Coach Griz, they’ve done an amazing job with me, taking it nice and slow.

“There were a lot of times where I was frustrated with myself, just because I knew there were a lot of things that I could do that I wasn’t doing as well as I should have, running-wise, lifting-wise, and when I got frustrated with myself, they’d calm me down and try to put things into perspective with me and made sure that I learned everything from the very beginning. So that helped a lot.” 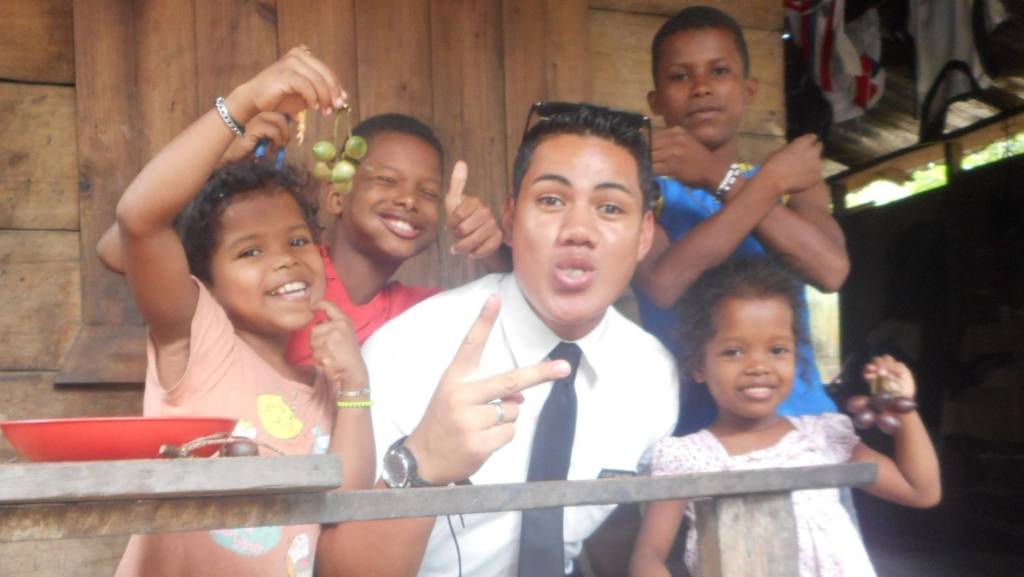 Mendenhall, who’s knowledgeable on the topic, having spent 11 seasons as BYU’s head coach before coming to UVA, said for players returning from mission trips, it “usually takes one full year for their physiology and their mindset to start approaching what it was before they left.”

Given that, the Cavaliers went into the 2018 season not planning to use Taulapapa.

“The coaches told me early on that that would be my kind of transition year,” Taulapapa said, “so I wasn’t really expecting to get in at all, and I was OK with that. My whole thought process was to go in there and work as hard as you can, and however you can help the team [in practice], just go ahead and do it. But being able to play was a good experience.”

Taulapapa made his debut in UVA’s sixth game, a win over ACC rival Miami at Scott Stadium, and became a regular on three special teams units: kickoff, kickoff return and punt return.

Atuaia said he thought he’d be able save a year of eligibility for Taulapapa, “but it was tough, because we needed guys to play special teams, and he’s a really good special teams player. We threw him in, and he helped us get through the latter part of the season. I don’t think we get through without him. He did a really good job, and he’s going to continue to do the same thing this year too.”

Virginia’s spring game is Saturday at 1 p.m. at Scott Stadium.

Asked if he expected Taulapapa to emerge this spring as a potential successor to Jordan Ellis, the Cavaliers’ No. 1 running back last year, Atuaia said, “I knew he had the skill set. I wanted to see how he was going to be competing against the rest of the guys in my group. It manifested itself on the field, so now he’s in the mix, and he’s trying to carve out a name for himself.”

Taulapapa, who played at 205 pounds last year, hopes to be up to 215 by the Aug. 31 season opener against Pittsburgh. He’s one of five players on the UVA roster from Hawaii, along with offensive linemen Micah Mariteragi (Taulapapa’s roommate) and Chris Glaser (who attended high school in Ohio) and defensive linemen Samson Reed and Aaron Faumui.

Two of the Cavaliers’ coaches are from Hawaii: Atuaia and offensive coordinator Robert Anae, both of whom graduated from Kahuku High, a public school with a storied tradition in football.

His family lived in the Kahuku zone, but Taulapapa attended Punahou, a prestigious private school whose alumni include Barack Obama. Honolulu is about 35 miles from Laie, but traffic on Oahu is often terrible, and Taulapapa spent about three hours each day driving with his father to and from high school.

“My dad and my mom, they made a lot of sacrifices to make it work,” said Taulapapa, who’s considering a double major in foreign affairs and Spanish, a language in which he became fluent in Nicaragua.

Atuaia remembers a fiercely contested game between Kahuku and Punahou. Many of Taulapapa’s childhood friends played for Kahuku, and “they know the people that leave, and they’re gonna go get ’em,” Atuaia said. “I wanted to see how Wayne would react, and the way he played. He didn’t one time back down to anybody, and I said, ‘I can get with a guy like that.’ ”

When Taulapapa was a junior, Punahou edged Kahuku 13-10 in the Division I state semifinals.

“It was a very emotional game,” he said. “There was a lot of talking the week before. The love was always there, but football’s such a serious sport, especially in Kahuku. That was a very crazy game. The fact that we won was probably one of my greatest accomplishments.”

Atuaia was on Mendenhall’s staff at BYU when he began recruiting Taulapapa. After Mendenhall and most of his assistants moved to UVA in December 2015, BYU pulled the scholarship offer to Taulapapa, Atuaia said. “I didn’t even know about it. His father wrote an email and told me the situation. I went to Bronco and to [Anae], and right away both of them said, ‘If he wants to come, he has a scholarship offer here.’ “

The Hoos haven’t regretted that decision. Less than a year after enrolling at UVA, Taulapapa is rising quickly on the depth chart at running back.

“That was the whole goal,” he said. “My dad always taught me, you just gotta put your head down and work. The results or the consequences will come afterwards. That’s not up to you at the end of the day. As long as you work hard, people will know what you’re capable of, and that’s all you can control.”