CHARLOTTESVILLE –– For Tavon Mason, giving back is his passion and his purpose.

He’s a behavior specialist at Franklin Middle School in Baltimore County, Maryland. He’s the head football coach at another Baltimore County school, Woodlawn High, from which he graduated before enrolling at the University of Virginia.

He’s the CEO and co-founder of a foundation, Tavon Mason Loves the Kids, that promotes health, fitness, education, and literacy and annually donates slippers to patients at children’s hospitals on the East Coast, among other initiatives.

He’s the author of a children’s book titled “Tavon Does It All” and an eBook titled “The 60-A-Day Promise: A Guide to a Healthier Lifestyle & Family,” both of which are available at Amazon.com.

Moreover, Mason and his wife, Tierra, a nurse at the University of Maryland Medical Center in Baltimore, have four children at home, and he has a daughter who attends Virginia Commonwealth University in Richmond.

“I guess you could say it’s my thing, working with kids,” Mason, 40, said in a recent phone interview. “I felt like it was my purpose.”

After growing up in Baltimore, earning a football scholarship to UVA, and getting a taste of the NFL, Mason felt he had a message to share.

“I wanted to show the kids here in Baltimore, or wherever I went, that someone out there cared for them and that I’m human,” he said. “Because I think sometimes as athletes we’re put on a pedestal, and I never wanted that. I felt like playing football, even though I loved it and enjoyed it, that was a job, and I love helping people. So it just started to come together, and I just felt like that was my duty, my purpose. Along the way, of course, I had to start balancing out doing that and also making sure I had time for the family as well.”

He came to UVA in 1998 and redshirted that fall. For the next three seasons, Mason contributed at wide receiver and on special teams. In 1999 and 2000, he played for head coach George Welsh. In 2001, he played for Welsh’s successor, Al Groh. 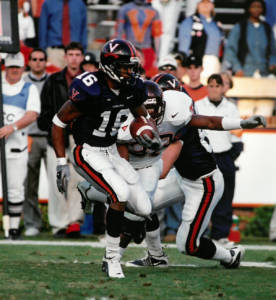 Mason’s career statistics: 50 receptions for 596 yards and four touchdowns; 12 carries for 101 yards and two TDs; and 44 kickoff returns for 1,004 yards and one TD. In each of his three seasons, Mason led the Wahoos in kickoff returns.

His most memorable performance came on Nov. 10, 2001, in an heart-stopping and action-packed ACC game at Scott Stadium. There were eight lead changes in the fourth quarter alone that night, but the Cavaliers finally emerged with a 39-38 win over the Georgia Tech Yellow Jackets.

In the first quarter, he caught a 19-yard touchdown pass from quarterback Bryson Spinner. In the fourth, Mason ran back a kickoff 100 yards for a TD, becoming the first Cavalier to do so. (Marquis Weeks and Joe Reed have since matched Mason’s feat.)

That kickoff return is preserved on a highlight DVD, and it “just brings chills back to be able to see that,” Mason said.

In 2002, he passed up his final season of eligibility at UVA to pursue an NFL career. Mason signed with the New York Jets as an undrafted free agent and appeared in eight preseason games for them: four in 2002 and four in 2003. Neither year, however, did Mason make the Jets’ final roster.

“It was a numbers crunch,” recalled Mason, who has a degree in anthropology from UVA. “It was frustrating, but it also helped me learn the business, so I’m able to pass it on to young guys that are looking to make that leap to the NFL. I try to make sure they have everything in a row, have guidance, have that mentor, that person that can help them know to always have a backup plan if [football] doesn’t work out.”

He began working as a substitute teacher, first at Woodlawn High and later at Deer Park Middle School in Baltimore County. Eventually, he found he had a gift for helping children with behavioral issues or special needs, and he worked at group homes, behavioral health facilities, and in Baltimore-area schools.

From 2012-16, Mason was a paraeducator at Parkville High School in Baltimore County. He’s been at Franklin Middle in its special education department since May 2016.

“I work with kids who have special needs, who have [Individualized Education Programs], who have behavior concerns,” Mason said. My role is to help them cope with any issues they’re having and give them resources and give them tools on how to deal with their anger if anything happens.”

He didn’t give up on his dream of making an NFL roster until 2009, when he played indoor football for the Baltimore Mariners.

In 2011, he launched his coaching career in football as an assistant at Woodlawn. In 2014, Mascon became a part-time assistant coach at Stevenson University in Baltimore County. (Stevenson advanced to the NCAA Division III playoffs in 2016.)

In 2018, Mason joined the coaching staff at Loyola Blakefield, a private school in Towson, and spent two seasons there as an assistant. He’s also coached track & field at Woodlawn and Parkville, and he spent two years on the staff of the Baltimore Nighthawks, a professional women’s football team.

All of which helped prepare him for his current coaching gig. When he learned this year that Woodlawn was looking for a new head football coach, Mason submitted his résumé.

He interviewed for the position on March 12. The next day, Baltimore County closed its schools because of the COVID-19 pandemic. A week later, Mason was hired.

He has yet to meet face to face with his players, but after his hiring was announced many of them reached out to him on social media, Mason said, “introducing themselves and asking questions, and ever since then I’ve been talking to them, keeping them motivated, giving them little things they can do on their own.”

Mason has stayed busy attending virtual coaching clinics, putting together his staff and studying film of Woodlawn’s 2019 games. Whether the Warriors will play this fall remains uncertain. “The kids are eager,” he said. “They ask me every day, ‘Coach, do you hear anything?’ And I’m like, ‘I haven’t heard anything yet. If I hear something, I’ll let you know. But right now, everything is built on making sure you guys are safe.’ “

“That’s one thing I can say about the Virginia brotherhood: We definitely talk to each other and check in with each other,” Mason said. “And it’s not just a football thing. It’s ‘How is your family doing? How are you doing? If you need anything, don’t forget you can call one of your brothers.’ “

When Mason was hired at Woodlawn, the UVA football program congratulated him on its social media accounts, and he received text messages from head coach Bronco Mendenhall and several assistants.

“That was pretty cool,” said Mason, who overlapped with Hagans, now the Cavaliers’ wide receivers coach, for one season at Virginia.

Mason has been a regular at the football program’s alumni weekend each spring––the pandemic forced the cancellation of that event this year––and returns to Charlottesville whenever his schedule permits.

In 2019, he attended two games at Scott Stadium, both of which were dramatic UVA victories. Mason saw the Cavaliers’ 31-24 conquest of Florida State on Sept. 14 and their 39-30 win over Virginia Tech in the Nov. 29 regular-season finale.

“It was just pandemonium,” Mason said of the atmosphere during the Hoos‘ first win over the Hokies since 2003.

In Baltimore, the pandemic has limited the work Mason’s foundation can do in the community, and the annual slipper drive is on hold. COVID-19 is not the only challenge this country is facing, of course, and Mason talks to his players about the fight for racial equality.

He’s told them not to “be afraid to celebrate themselves and their culture,” Mason said, but he’s also stressed the importance of conducting themselves responsibly.

“You can control the narrative of what’s going on by how you carry yourself and what you do,” he said, “so I try to tell them to make sure they’re doing everything they need to do 100 percent, and that entails how they carry themselves, the company they keep.

“I’ve been teaching that for years, even through my mentoring program at Franklin Middle: The company you keep can dictate how other people view you. Being the new guy coming in, and then coming in during the pandemic, I had to let it be known what my philosophy is and where I’m coming from and how this is going to operate. And I’ve been getting a great response from my players.”

Poindexter to be Inducted into Virginia Sports Hall of Fame
Football

Poindexter to be Inducted into Virginia Sports Hall of Fame

Armstrong Named a Finalist for the Dudley Award
Football

Armstrong Named a Finalist for the Dudley Award