“Best stat line of the year,” said UVA head coach Lars Tiffany, who gets credit for compiling that list.

The 5-foot-7, 185-pound LaSalla arrived on Grounds as an unheralded recruit in the summer of 2019. By the end of his first college season, however, he’d established himself as one of the nation’s best at his position, and the Cavaliers were NCAA champions.

LaSalla won the final seven faceoffs in UVA’s overtime win over Maryland in the NCAA quarterfinals that season. A week later, he won the final eight draws as the Wahoos rallied to knock off their ACC nemesis, Duke, in the NCAA semifinals in Philadelphia. They reached the NCAA summit with a win over Yale two days later.

“In every sport, possession is so valuable,” Tiffany said. “In the sport of lacrosse, it’s not really fair the way the rules are written. You can do make it, take it, and what the rules allow us to do, we take full advantage of with Petey LaSalla on our roster.

“We’ve enjoyed that luxury. I don’t think we take it for granted, but we’ve gotten accustomed to winning almost two-thirds of our faceoffs.”

The COVID-19 pandemic shut down the 2020 lacrosse season well before the NCAA tournament was scheduled to begin, so Virginia didn’t have an opportunity to defend its title that year. But the Hoos returned last season and captured a second straight NCAA championship for the first time in program history.

It wasn’t an easy season for LaSalla. He hurt his hamstring early in the year and then re-injured it later in the spring. He also dealt with an ankle injury. Then, on the eve of Virginia’s game against Bryant in the NCAA tournament’s first round, he severely pulled a muscle in his right quad, “to a point where I couldn’t even walk,” LaSalla recalled.

In retrospect, LaSalla said, he probably shouldn’t have played against Bryant. He didn’t want to miss the game, though, and after rehabbing diligently under the supervision of Rebecca Vozzo, the team’s athletic trainer, he pushed through the pain and helped Virginia earn a hard-fought win over Bryant.

He followed a similar routine in the tournament’s next two rounds, practicing little during the week and then gutting it out on game day, first against Georgetown in the quarterfinals and then against North Carolina in the semifinals.

Virginia met Maryland for the NCAA title in East Hartford, Conn., and LaSalla headed into the game in good health. Playing without the brace he’d been wearing, No. 23 collected an assist on the Cavaliers’ first goal. About 40 seconds later, after winning a faceoff cleanly, LaSalla sprinted down the field for an unassisted goal that tied the game at 2-2. His celebration was short-lived.

“As I was planting and shooting, I re-pulled [the quad muscle],” LaSalla said, “so I just kind of had to deal with that the rest of the game.”

Vozzo tried to treat the injury “and put a sleeve on it, heat it with some ointment,” Tiffany said, but LaSalla worried the medical staff might pull him from the game. “Petey was like, ‘No,’ ” Tiffany said. “He wouldn’t go near her.”

LaSalla took every faceoff for UVA that day at Rentschler Field. He lost the game’s final draw, giving Maryland a chance to force overtime, but goalkeeper Alex Rode made the save to secure the Cavaliers’ 17-16 victory.

“It definitely would have been a nightmare situation if he scored,” LaSalla said, “but luckily enough we had all-star Alex Rode in net to make that save.”

His injury notwithstanding, LaSalla won 21 of 37 faceoffs against the previously unbeaten Terrapins.

LaSalla, who’s from Miller Place, N.Y., is “as gritty as they come,” Tiffany said. “That’s an over-used word, grit, but he defines it.”

For the season, LaSalla won a school-record 277 faceoffs, which ranked No. 1 nationally. It’s common in college lacrosse for a faceoff specialist to be known as a FOGO: a player who is expected to Face Off and then Get Off the field. That’s not LaSalla.

In 2019, he scored three goals in the NCAA tournament’s final two rounds, and he rang up 10 goals and seven assists last season.

This promises to be a special weekend for the UVA lacrosse family. The current Cavaliers will play an alumni team on Friday night. Then, on Saturday afternoon, members of the 2021 team will receive their championship rings during a ceremony at the Darden School of Business. Finally, on Saturday night, the 2021 team will be honored during the UVA-Georgia Tech football game at Scott Stadium.

Football is another sport about which LaSalla is passionate. He starred at running back and linebacker at Rocky Point High School, and he’s been following the progress of Bronco Mendenhall’s Cavaliers this fall.

Quarterback Brennan “Armstrong has been lighting it up,” LaSalla said. “I think he should be in the running for the Heisman [Trophy].” 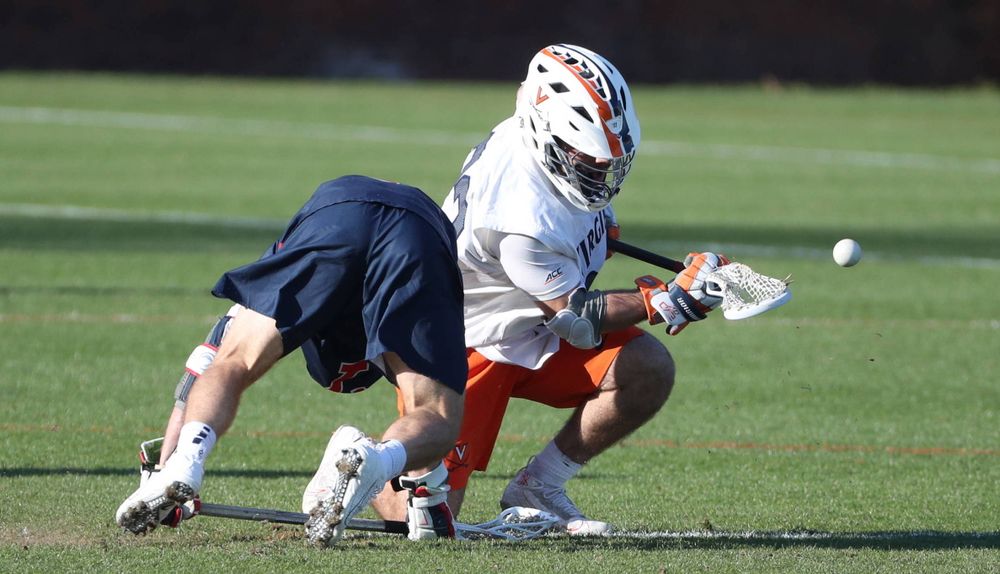 Once the weekend’s festivities end, LaSalla said, it will be time for the Hoos to direct all their attention to the coming season. In 2022, Virginia will try to become the first program since Princeton (1996, ’97, ’98) to win three consecutive NCAA titles.

“Obviously, we’re getting our rings this weekend, so you want to enjoy it now,” LaSalla said, “but after this weekend, we kind of close that chapter of Virginia lacrosse and try to  start back from square one and forget that we’re back-to-back champs and kind of build back up from ground zero again.”

In 2019, the Hoos entered the NCAA tournament seeded No. 3. They were seeded No. 4 last season. In each of those years, UVA stumbled at times during the regular season.

“No one likes losing,” LaSalla said, “but I think the earlier in the season you lose, the more you learn from it and the more it kind of lights a fire under you to get better and not lose again. And then obviously it’s important to get hot at the right time. So the end of the [regular] season, right at the start of the playoffs is, is what Lars harps on.”

The 2021 season capped the illustrious college careers of several Cavaliers, including Jared Conners and Dox Aitken, and LaSalla’s role in the program has changed.

As an underclassman, LaSalla said, he looked up to that group “for guidance, and now you kind of find yourself in that role for these younger guys. So it’s kind of cool how that comes around.”

This has been a productive fall for the Hoos, who scrimmaged Lehigh and Penn State one weekend and then faced Team USA and Team Canada the next.

What a way to kick of a fall scrimmage.@UVAMensLax Peter LaSalla scores off opening FO vs @LehighLacrosse Excited to see this one pic.twitter.com/P2CFPe0Dg7

“We got beat up pretty good by Canada,” LaSalla said, “but you also have to realize that they’re a national team for a reason. I think we bounced back pretty well against USA. We only lost by one, so it was promising and shows the fight we have to be able to come back from [a one-sided loss].”

With strict COVID-19 protocols in place on Grounds throughout the 2020-21 school year, attendance was Klöckner Stadium was extremely limited last season. LaSalla is looking forward to seeing and hearing more fans during games in 2022.

“Last year was odd,” he said. “You’ve got Duke at home on a Thursday night and there’s just not that many people there. So I think this year with fans being back, there will definitely be a more electric atmosphere at the games, which is beneficial to us.”

LaSalla is on track to graduate in the spring with a bachelor’s degree in American studies. The NCAA granted an extra year of eligibility to every student-athlete who competed in 2020-21, and LaSalla plans to enroll in a master’s program at UVA and compete as a graduate student in 2023.

“We couldn’t be more thrilled,” Tiffany said. “There were so many negatives that came with COVID, but we’re trying to turn some of them into positives, and this is certainly one of them.”

Tiffany laughed. “He’s going to make a lot of our opponents shake their heads and say, ‘He can’t still be there, can he?’ ”