CHARLOTTESVILLE –– The mood in the home locker room at Scott Stadium was more subdued Saturday night than it typically is after a victory, with players and coaches visibly frustrated by the final minutes of Virginia’s win over Coastal Division rival Georgia Tech. The Cavaliers’ spirits lifted, though, when head coach Bronco Mendenhall summoned Keytaon Thompson to his side.

Thompson turned 23 on Saturday, and his teammates serenaded him with a rendition of “Happy Birthday.” As the song neared its end, he raised a sledgehammer and smashed the rock on the floor in front of him, punctuating UVA’s 48-40 victory.

“It was great, man,” a smiling Thompson said late Saturday night when asked about his teammates’ singing. “I think it sounded much, much better after a win.”

Mr. FBP himself @Thompson_Kt5 did it all out there. And on his birthday!🎊🎉 Go ahead and break the rock!#GoHoos | #THEStandard pic.twitter.com/HhTYDXlR60

A graduate transfer who’s in his second year at Virginia, Thompson rushed seven times for 65 yards and caught nine passes for 89 yards against the Yellow Jackets (3-4 overall, 2-3 ACC). The performance underscored why he’s listed simply as “football player” on the depth chart and why the Wahoos love No. 99, who’s been playing with a broken left hand.

“He’s an athlete,” Georgia Tech safety Juanyeh Thomson said. “Put the ball in his hand and he makes plays, and he made a lot of plays tonight.”

That was true of several other Cavaliers, too, including quarterback Brennan Armstrong, wideouts Dontayvion Wicks and Billy Kemp, and tight end Jelani Woods. Virginia (6-2, 4-2) finished with 636 yards of total offense, its highest total in 11 years.

Still, what should have been a comfortable victory for UVA wasn’t decided until the game’s final play, a Hail Mary pass by Georgia Tech that safety Joey Blount knocked down in the end zone.

“Honestly, I’m upset with how the game ended,” said Blount, who finished with eight tackles and had a second-quarter interception that helped swing momentum in the Hoos’ direction. “Even though we won, I think we need to win in better fashion, and we can’t leave it up in the air like that … I just hold the team to a high, high standard.”

For the first 56 minutes, Mendenhall said, the game played out as the Hoos thought it might, but the “finish was a whole different script.”

With 3:50 to play, Armstrong and wideout Ra’Shaun Henry connected on a 20-yard touchdown pass, and Brendan Farrell’s extra point made it 48-27.

Georgia Tech, however, refused to go away. The Jackets scored a touchdown with 1:16 left, cutting the Cavaliers’ lead to 48-34, then recovered an onside kick.

Fifty-four seconds later, Georgia Tech scored again, and suddenly it was 48-40. The Jackets’ two-point conversion attempt failed, but they followed that with another onside kick, and they recovered that one, too, with 20 seconds remaining.

Completions of 7 and 12 yards moved Georgia Tech to the Virginia 31. Cornerback Anthony Johnson broke up quarterback Jeff Sims’ next attempt, setting the stage for the game’s final play, after which the Cavaliers could finally exhable.

“Giving up those two onside kicks, and then having the defense come back out and not play well, was definitely not great,” Virginia safety Coen King said. “No one thought that was a positive thing.”

Mendenhall noted that “48-27 would have been better” than 48-40, but he credited the Jackets with two superb onside kicks. “They executed super well,” he said.

The Cavaliers, who became bowl-eligible with the victory, have won four straight since losing Sept. 24 to Wake Forest at Scott Stadium. They’ve been on a roller-coaster ride defensively this season, and Saturday brought more of the same.

Coming off a 48-0 win over Duke, Virginia gave up 570 yards against Georgia Tech. The Jackets scored touchdowns on each of their first two drives and led 13-0 late in the first quarter.

“They had us on our heels a little bit,” said Blount, one of many UVA players from the Atlanta area.

Armstrong and Co. were able to erase that deficit, but on a night when two key defensive starters (lineman Mandy Alonso and linebacker Noah Taylor) suffered injuries, the Hoos rarely played the complementary football that’s their goal.

ON A ROLL: Armstrong, who’s in his second year as Virginia’s starter, continues to put up video-game numbers. Against Georgia Tech, he rushed for 99 yards, the most by a Cavalier this season, and passed for 396. He threw for four touchdowns and ran for two more.

“The biggest thing was trying to show him different looks throughout the game,” Georgia Tech head coach Geoff Collins said. “We did do that, but the kid is really good. He was finding the holes, the soft spots in certain coverages. We kept trying to change it up and kept trying to change the pressures, and he just kept seeing and finding it. He just has a knack for finding a way to keep plays alive and find his receivers and he keeps his eyes downfield and he makes plays.”

Armstrong hurt his right knee in UVA’s second game, a 42-14 win over Illinois. The injury didn’t keep him out the lineup, but in the next few games Armstrong did not often look to run. He’s close to 100 percent now, however, and his running ability gives Virginia “one other weapon to move the ball forward,” Mendenhall said.

No. 5 still wears a brace on his right knee for protection, “but I’m ready to run now,” Armstrong said, “and we got to utilize that tonight.” 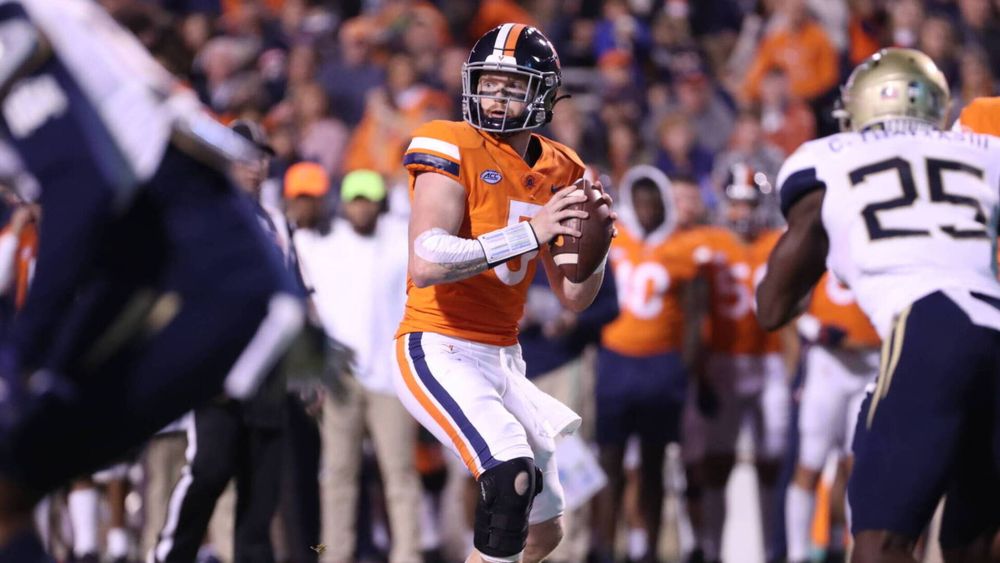 PLAYMAKERS: Thompson and Wicks grew up about 90 miles from each other in Louisiana, the former in New Orleans and the latter in Plaquemine, which is near Baton Rouge.

“We really take pride in that and where we’re from,” Thompson said, “and we want to represent really well. We kind of feed off each other in the game. [Wicks] pushes me to get better, and I push him to get better. We compete in pretty much everything, so I think that makes us really close.”

Wicks caught six passes for 168 yards and two touchdowns Saturday night. He played basketball in high school, and on his first touchdown, Wicks outjumped two Jackets in the end zone to snare a 13-yard pass from Armstrong.

On the second, Wicks caught a short pass from Armstrong at the Virginia 30-yard line, eluded a tackle attempt and sprinted untouched to the end zone to complete a 77-yard play.

He knows Armstrong trusts him, Wicks said, “and I want to be that receiver that comes down with the ball any time he throws it to me.”

“I’ve got a lot of talent around me,” Armstrong said, “and that’s what makes it fun.”

UP NEXT: After playing two straight games at Scott Stadium, the Cavaliers are headed to Provo, Utah, a college town most of their coaches know well.

Mendenhall was the Cougars’ head coach for 11 seasons before coming to UVA in December 2015. Seven of his UVA assistants were also on his staff at BYU: Robert Anae, Mark Atuaia, Garett Tujague, Jason Beck, Kelly Poppinga, Shane Hunter and Nick Howell.

This will be the sixth meeting between these programs. Virginia leads the series 3-2. The Hoos are 1-1 against the Cougars in Provo.

BYU ended a two-game losing streak Saturday with a 21-19 victory at Washington State on Saturday afternoon. 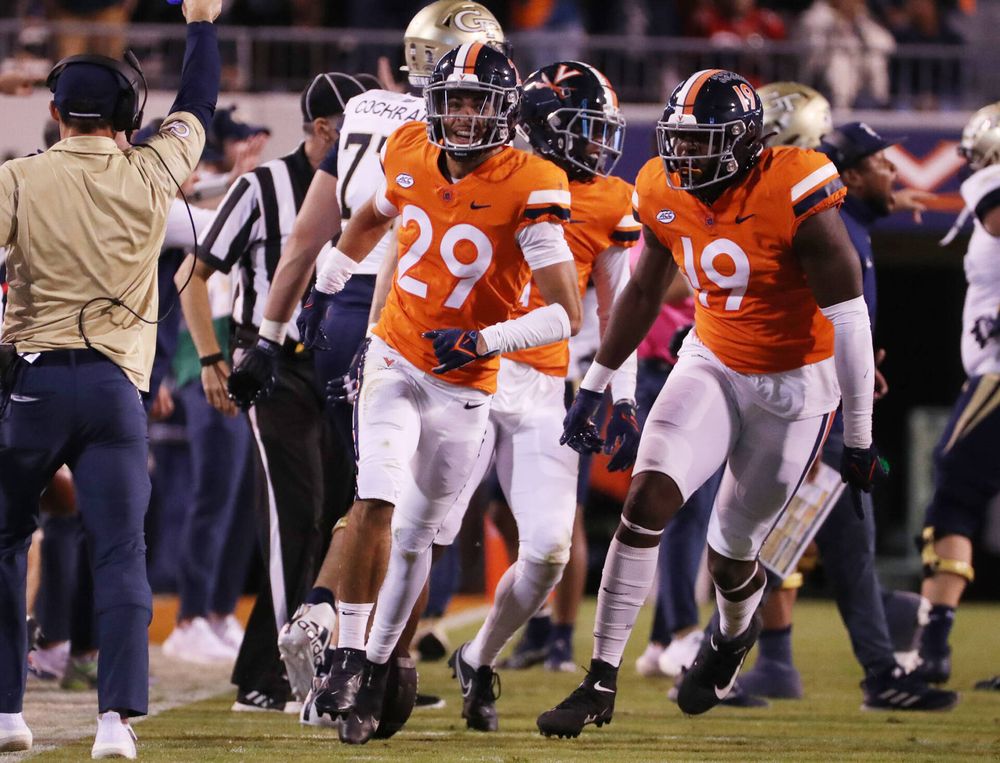 SOUND BITES: For the Cavaliers, the victory was their 21st in their past 24 games at Scott Stadium, and they’re now 14-4-1 all-time against the Jackets in Charlottesville. Among the postgame comments:

* Thompson said on the Cavaliers’ high-powered offense: “I feel like a lot of when we do get stopped, it’s self-inflicted, with either penalties or miscues within the offense. But when we’re all clicking and we’re all on the same page, I feel like we’re the best offense in the nation.”

* Mendenhall on Thompson and Wicks: “Keytaon is doing an amazing job, and it just seems like every time he gets the ball positive things happen. We’re falling forward, we’re moving forward, we’re catching it one hand, two hands. And regarding Dontayvion, ability is one thing, execution and production is something else, and so he’s worked really hard to develop himself into a really skilled receiver.”

* Mendenhall on Blount, who’s in his fifth year at UVA: “He’s really, really productive and makes critical plays, and I think he’s a really good football player, so I’m glad he’s with us.”

* Collins: “Hats off to Virginia. You watch the tape, and you watch what they’ve done on offense all year, and you know they’re dangerous. They’ve got a lot of weapons, you know how multiple and how unorthodox some of the stuff that they do is. Then you see it live and in-person.”