CHARLOTTESVILLE — The first home event for the University of Virginia men’s golf team in more than a decade bears the name of the late Lewis Chitengwa, and that’s a fitting honor. Chitengwa, who died tragically of meningococcal meningitis in June 2001 at the age of 26, was a pioneer in the Cavaliers’ program.

A native of Zimbabwe, Chitengwa was the first Black golfer on the men’s team at UVA, where he played for head coach Mike Moraghan. During his four years in the program, Chitengwa recorded 17 top-10 finishes, with two victories, and twice was named an All-American. He was the ACC’s rookie of the year in 1995 and as a sophomore placed seventh at the NCAA Championships, then the best finish by a Cavalier in a half-century.

Chitengwa, who graduated from the University in 1998 with a degree in African American Studies, also was a team captain who earned widespread admiration, on Grounds and off.

“He was humble, he was appreciative, he was focused, he was determined,” recalled Moraghan, who’s now the executive director of the Connecticut State Golf Association.

“He never said a bad word about anybody. He never complained about anything. He took full advantage of opportunities that were presented to him, and did it with enthusiasm, and he went out of his way to thank everybody who helped him along the way. And so he was just different than most college kids, who oftentimes can find something to complain about. He was just a refreshing personality, and people would fall in love with him.” 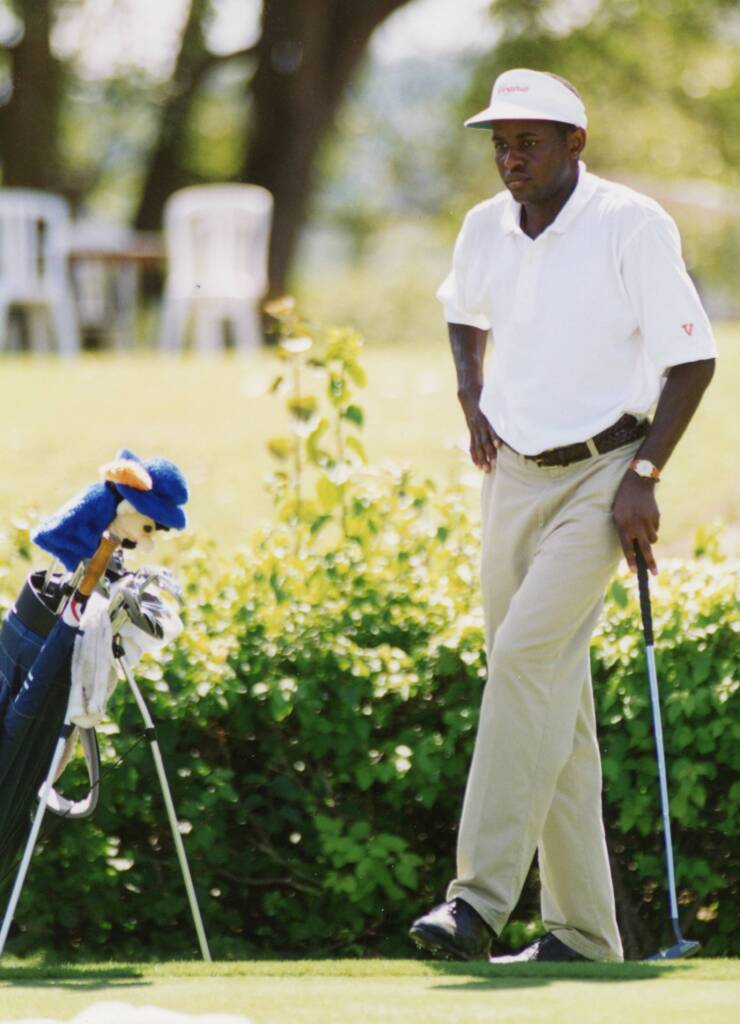 Chitengwa, who enrolled at UVA in 1994, had “played competitively in some significant amateur and junior amateur events on five different continents,” Moraghan said. “He played in Japan, he played all over Africa, he played in Europe, he played in the U.S., and he played in Australia, and all before he was 18 years old. So he was a world traveler who had represented Zimbabwe, both for their junior teams and their men’s teams, and was just extraordinary as a player.”

His most memorable victory came in 1993, when Chitengwa became the first Black golfer to win the South Africa Amateur. The apartheid system had yet to be dismantled in South Africa then. The country was “taking baby steps toward becoming an actual democracy, but it still hadn’t had free elections and it was still an apartheid country. So Lewis goes in there in March of ’93, and of course he’s refused entrance into the clubhouse.”

Chitengwa eventually convinced club officials that he was not a caddie and was in fact there to compete in the tournament. Once he was inside the clubhouse, however, “they  won’t give him food or drink,” Moraghan said.

Undeterred, Chitengwa “works his way through 72 holes of stroke play and then wins five matches,” Moraghan said. “Along the way, he beats Rory Sabbatini, who became a household name, in the semifinals, and he wins the championship.”

That feat, Moraghan said, was “like Jackie Robinson integrating baseball in America. It  was like Jessie Owens winning gold medals in front of Hitler in 1936 in Nazi Germany, when Hitler was preaching the superiority of the Aryan race. It may not have resonated with people 10,000 miles away, but in Sub-Saharan Africa, Lewis was a hero to millions of people. That’s how significant it was, and he was an 18-year-old kid that did it.”

Former Farmington Country Club golf professional Bobby McIver, who was close with Chitengwa, is from Nashville, Tenn., as is Sargent.

“So I was playing professional golf and ran into Lewis there in Nashville,” Sargent said. “I think he actually stayed with Bobby a little bit during his professional career, as he was trying to make it and pinch pennies, like every other mini-tour guy in the world. And we ran into each other a few times in Nashville.

“I can’t say that we were friends or anything. We didn’t play the same tours, and he was probably seven or eight years younger than me. But he was a super-nice young man, and obviously very talented. I’d heard about the things that he had accomplished here at Virginia and beyond, and it’s a shame that he was taken away too early from us.”

Chitengwa died in Canada, where he was competing in the Canadian Tour’s Edmonton Open. After shooting 70 in the first round, he shot 67 the next day. That night, however, he began to feel ill, and he was so sick the next morning that he withdrew from the tournament. Chitengwa was taken to the emergency room that afternoon and died about two hours later.

“Lewis was one of the most impressive people I’ve ever known in my life,” Moraghan said, “and for him to die at age 26 was a tremendous tragedy.”

The inaugural Lewis Chitengwa Memorial will be held Monday and Tuesday at Birdwood Golf Course. Not since the final Cavalier Classic was held at Birdwood in April 2011 have the UVA men hosted an event.

“In our sport, it’s rare that teams host,” Sargent said, “because you always bring in [about a dozen] teams to compete against. So hosting is a unique endeavor. We’re honored to be in that position to bring in some teams late here in the year and play on a new Birdwood, which nobody has really played on, except for us. So we have a little bit of a home-course advantage, and hopefully we can take advantage of that.”

Birdwood has been transformed in recent years. In the fall of 2018, the UVA men’s and women’s teams moved into the new Dean Family Golf Performance Center at Birdwood. The center includes six indoor hitting bays, two bays for video analysis, a putting studio, a fitness room, locker rooms and lounges for the players, coaches’ offices, a club repair room, a conference space, and a nutrition station.

Across the street is the Lew Oehmig Short Game facility, which includes multiple hitting areas, targets, bunkers and greens.

The course itself re-opened in the summer of 2020 after being redesigned by Davis Love III and his company, Love Golf Design.

“From our standpoint, in terms of collegiate golf, it’s a much longer golf course,” Sargent said. “The previous Birdwood just didn’t have the length to even qualify for an NCAA regional or certainly not a national championship.

“So now, given the length of the golf course, it puts us in the conversation to host an NCAA event. From a collegiate standpoint, that’s certainly the biggest difference. In terms of the golf course itself, it’s so much better than the old golf course. It’s not even close. The other one was good, but it had gotten a little long in the tooth and gotten a little worn out around the edges. It had certainly gotten short for our players. But this golf course is much more demanding. Obviously, it’s in better condition. It’s brand new.”