CHARLOTTESVILLE — The University of Virginia football team opened the season in friendly surroundings, defeating Richmond 34-17 at Scott Stadium. The Cavaliers won’t find the atmosphere as hospitable this weekend.

These teams met last year at Scott Stadium, where UVA rolled 42-14 over Illinois. That was Virginia’s final season under head coach Bronco Mendenhall and the Fighting Illini’s first under Bret Bielema, who’s back this year.

Until the Wahoos leave for Illinois on Friday, Elliott said, they’ll prepare for this game as they would any other, with one exception. Played at full volume at practice Tuesday morning—over and over and over again—was Illinois’ fight song, “Oskee-Wow-Wow.” UVA’s players can expect to hear it on repeat as the week continues.

The idea, tailback Perris Jones said Tuesday, is “to increase the chaos. On Saturdays it’s chaos. Coach has a quote: The more you sweat in peace, the less you bleed in war. So that’s kind of the mentality there: The more chaos we can create and deal with in practice, the better off we’ll be in the game.”

Elliott said: “We practice with music, and typically the music is loud. But I wanted [the players] to hear something different to try and get them used to it, so the first time they strike up the band is [not] the first time they hear it, so they’re kind of used to it. Now, it’s not even a distraction. They probably won’t even pay attention and hear it once they get up there.”

This will be UVA’s 20th game all-time against the Big Ten’s current members. Of the Cavaliers’ seven wins over Big Ten foes, two have come on the road. Virginia won at Penn State in 1989 and at Indiana in 2011.

The Big Ten has an impressive history in football, and so “it’s going to be a great test for us,” Elliott said. “But I think at the end of the day, whether it’s Big Ten, whether it’s ACC, you win football games in the trenches, and so the challenge for us is to see can we match their physicality and their toughness.

“The team that can establish the run and be committed to the run and have the most success … and takes care of the ball is more than likely going to be the team that wins the game.”

On offense, Illinois features tailback Chase Brown, the first player in program history to rush for at least 150 yards in each of the first two games of a season. He ran for 151 yards in the opener against Wyoming and 199 against Indiana last weekend.

Jones said: “They challenge you. They line up and they just say, ‘Beat us if you can. We think we’re better than you guys.’ And so that’s the mindset we’re going in with. We’re gonna go at them and give them everything we got and see who comes out on top.”

MIXED REVIEWS: For the Cavaliers, there was more good than bad in their first game under Elliott. Virginia totaled 505 yards on offense and allowed only 160 passing yards against UR. But the Hoos also turned the ball over twice, dropped several passes and allowed 170 rushing yards.

Elliott held himself accountable, too. “There’s things that I’ve got to do better as a head coach,” he said. “In my first time out I was very critical of myself to make sure that I’m helping these young men be successful. All around as a staff, as a team, as a program, there’s things that we can do better.”

If he had it to do over again, Elliott said, he would have instructed offensive coordinator Des Kitchings to be more aggressive on Virginia’s final possession of the first half.

“It was a learning opportunity for all of us,” Elliott said. “I should have put my foot on the gas so these guys could come out in the second half and get off to a fast start.” 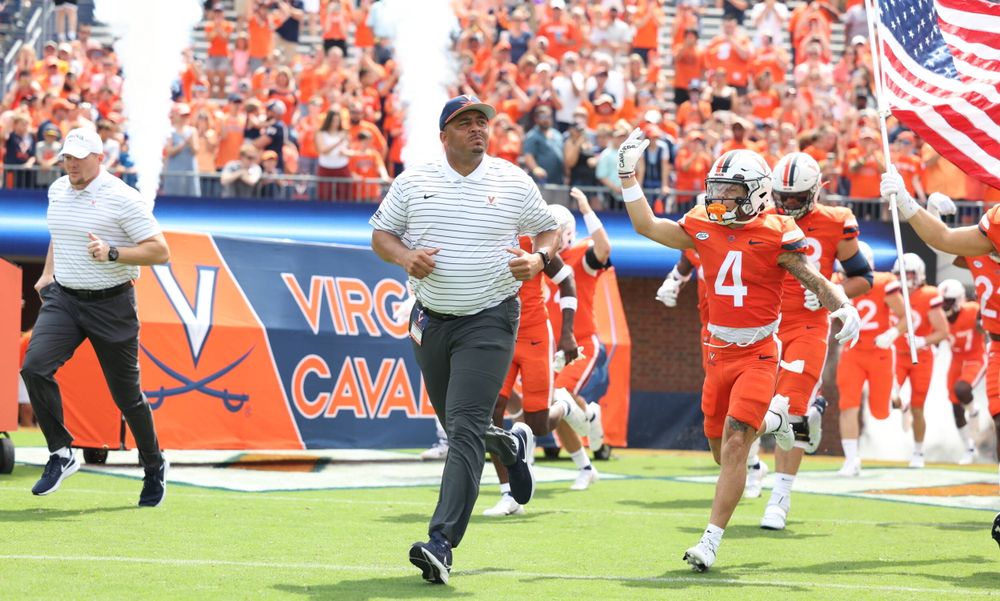 WORK IN PROGRESS: UVA’s starting offensive line against Richmond consisted of McKale Boley at left tackle, John Paul Flores at left guard, Ty Furnish at center, Derek Devine at right guard and Logan Taylor at right tackle. Of those five, only Flores had started a college game before Saturday, and that was at Dartmouth, from which he transferred to UVA after graduating in June.

Tackle Jonathan Leech, who has two career starts as a Cavalier, had surgery on his left hand last month and didn’t play against Richmond. Leech practiced Tuesday, though, and is likely to be available Saturday in Champaign.

“Still got a lot of work to do,” Elliott said when asked about the offensive linemen’s progress. Overall, though, he was “pleased with their effort. I think the guys up front tried hard. Technically we’ve got some things to improve, but it was good for them to get that work together, have some success, but also see tons of opportunity to improve.”

STANDOUTS: After reviewing videotape of the Richmond game, UVA’s coaching staff singled out three players for their performances: Elijah Gaines on special teams, Jones on offense, and cornerback Fentrell Cypress II on defense.

Gaines, a reserve cornerback, started on the kickoff, punt, punt return and kickoff return teams He was the fastest player down the field on five of the Cavaliers’ six kickoffs.

Jones, in his first start as a Cavalier, rushed 19 times for 104 yards and a touchdown, and he also caught a TD pass from quarterback Brennan Armstrong.

A redshirt junior from Rock Hill, S.C., Cypress started Virginia’s first six games in 2021 before missing the second half of the season with injuries. He intercepted a pass against North Carolina but finished the year with no pass breakups.

“I feel like this is a big year for me,” Cypress said Tuesday. “I just want to show what I can do, because I’ve had trouble the last couple years with injuries, and I feel like this year is my first time to play to my full potential. And that’s why I’m just excited, and it just brings more confidence to me as well, just being healthy.”

After being hired in December, Elliott didn’t spend much time studying film of UVA’s returning players on defense. He left that to defensive coordinator John Rudzinski, Elliott said, “because I didn’t want to create any kind of preconceived expectations or notions on these guys. The thing with Fentrell is just confidence. He’s a lot more confident. He’s getting opportunity.

“I made it known that I believe he can be a really good player, to him, so I think he feels that there’s trust from the coaches that he can do what we need him to do and do it at a high level.”

Not only is Cypress more confident this year, he understands “that he’s got to go,” Elliott said, “that we’re pushing him, like now you’ve got to go and you need to step into your role as a starter and play with that confidence. It was good to see him have those pass breakups … To see him be able to go up and play some balls in the air down the field now gives you a little more confidence as a play-caller to be able to put yourself in a situation where you can be a little bit more aggressive and take some calculated chances.”

MAKING UP FOR LOST TIME: Another redshirt junior, linebacker Josh Ahern, had to sit out the first half of the Richmond game after being ejected for targeting in UVA’s 2021 finale. In the two quarters he played, Ahern made five tackles, tying his career high, and recorded his first sack as a Cavalier.

Equally important, Ahern is finally healthy. He had knee surgery in January 2021 and wore a cumbersome brace last season.

“I had some tough times last year with [the knee],” Ahern said Tuesday, “and it took a while for me to fully recover and then build my legs back up from there.”

Winter workouts under the tutelage of Virginia’s strength and conditioning staff helped him strengthen his legs, Ahern said, and by the start of spring practice he was able to shed the knee brace.

The Hoos’ leading tackler against Richmond was linebacker Nick Jackson, Ahern’s closest friend on the team.

Playing alongside Jackson, who led the ACC in tackles last season, was “definitely fun,” Ahern said. “I think it makes things easy. I’ve known Nick for four years, and we live together now, so I just think it’s a good fit. But we’ve just got to keep working, make sure everything’s good.”