CHARLOTTESVILLE — Coming off a rough performance in Atlanta, true freshman Will Bettridge redeemed himself Saturday at Scott Stadium, where he connected on all four of his field-goal attempts, including two in overtime.

Alas for Virginia, those were its only points against ACC rival Miami on a picturesque fall afternoon. After the first two overtime periods produced four field goals—two by Bettridge and two by the Hurricanes’ Andres Borrregales—the format shifted and the teams had to attempt two-point conversions from the 3-yard line.

In the third OT, Miami had the ball first, and UVA safety Antonio Clary picked off quarterback Jake Garcia’s pass in the end zone. That put the Cavaliers “three yards from winning the game,” Tony Elliott noted afterward, but an infraction on center Ty Furnish moved the ball back to the 8, and wide receiver Dontayvion Wicks couldn’t haul in quarterback Brennan Armstrong’s pass in the end zone.

The Cavaliers went first in the fourth overtime, and Armstrong’s pass to wideout Lavel Davis Jr. in the back of the end zone was unsuccessful. Miami didn’t squander its next opportunity. Garcia rolled right, took off for the end zone and dived over the right pylon to lift the Canes to a 14-12 victory.

“The biggest frustration right now is [not] finding a way to win,” Clary said. “Those games right there, those hurt.”

Clary was among the many standouts on a UVA defense that put forth an inspired effort for the second straight game and hasn’t allowed a touchdown in the past eight quarters. Senior linebacker Nick Jackson recorded 14 tackles, and safety Coen King made 13 stops. Cornerbacks Anthony Johnson and Fentrell Cypress II broke up two passes each, and defensive Chico Bennett Jr. made his seventh sack of the season.

Under coordinator John Rudzinski, who’s in his first year at Virginia, the defense is “becoming more comfortable and more confident as every week goes by,” Elliott said. “The success that they’re having is breeding confidence. And you notice those guys are having a lot of fun. I’ve got to get the guys on offense to have fun. And the fun is in playing. The fun is in the opportunity. The fun’s not in statistics … We’ve got to have the right mindset every time we step on the field, and I’ve got to do a better job as the head coach with that on offense and on special teams.”

Not since 1981 had the Cavaliers lost a game in which their opponent did not score a touchdown. The offense’s inability to turn yards into points has been a season-long issue, but after a first half in which they failed to score, the Wahoos (3-5 overall, 1-4 ACC) started moving the ball with explosive plays Saturday.

On the first series of the third quarter, Armstrong passed to wideout Keytaon Thompson for a 30-yard gain and then teamed with Davis on a 47-yard completion. Davis fell down after catching the pass, but the Hoos still had first-and-goal from the Miami 3.

They went backwards from there, however, and had to settle for Bettridge’s 27-yard field goal, which tied the game at 3-3. Later in the quarter, tailback Mike Hollins caught a short pass from Armstrong and turned it into a 64-yard completion. Hollins went out of the bounds at the Miami 1, but again the Cavaliers were in prime position to score a touchdown.

Again they failed to do so. On third-and-goal from the 2, Virginia tried a trick play, but Miami broke up Thompson’s pass to tight end Grant Misch. The Hoos went for it on fourth down, and Armstrong spotted Misch open in the end zone. But Misch dropped the pass, and the score remained 3-3.

The Hoos’ red-zone woes weren’t over. Early in the fourth quarter, a 13-yard run by tailback Perris Jones gave UVA a first down at the Miami 12. Armstrong threw an incompletion on first down but ran for eight yards on the next play. On third-and-2 from the 4, Armstrong handed off to Jones, who was dropped for a two-yard loss.

“Should have had a better call there,” said Des Kitchings, Virginia’s first-year offensive coordinator.

“When we get down in the red zone, we’ve got to score,” Armstrong said. “Got to make plays. That’s just bottom line. We just got to make the plays that are there.” 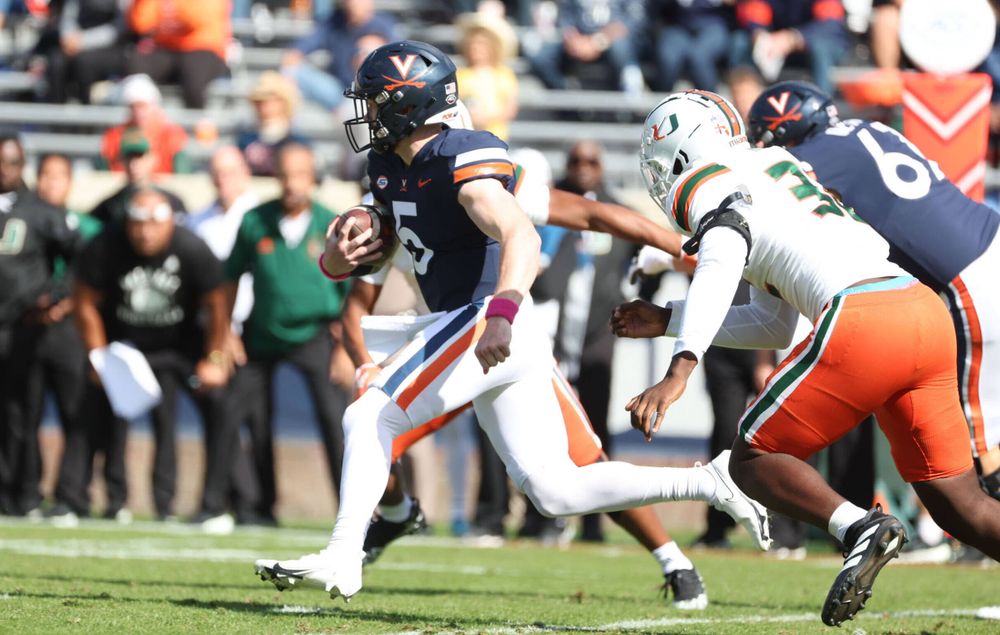 Virginia’s defense forced Miami (4-4, 2-2) to punt eight times and allowed only 272 yards. Like the Cavaliers, the Canes failed to score a touchdown Saturday, but they ran the ball effectively in the second half, and they forced overtime with a drive that ended with Borregales’ 20-yard field goal as time expired in the fourth quarter.

When the game finally ended, UVA was left to rue its missed opportunities.

“The issue was we needed to make one more play than they did,” Elliott said, “and they made a play there at the end and we didn’t make a play. But it seems like that’s been the theme with us offensively: We’re just leaving points on the field.”

On Virginia’s first play from scrimmage, Armstrong overthrew Wicks, who was open behind the secondary, on what might well have been an 82-yard touchdown.

“I’m upset with myself after missing that,” Armstrong said, “because that’s a big play, that’s a touchdown right off the rip.”

Armstrong hurt his left ankle early in the third quarter, but the medical staff retaped it, and he didn’t miss any series. He finished 15-for-25 passing for 208 yards, with no interceptions, and he rushed for 67 yards. Miami sacked Armstrong five times and limited UVA to 119 rushing yards.

“That defensive line that Miami has is pretty good,” Elliott said. “They’re pretty stout. They’ve played a lot of football, and they’re experienced, I knew that it was gonna be a challenge to run the football and we were going to have to do a good job to be able to protect, but there were some plays there.”

Miami played without its No. 1 quarterback, Tyler Van Dyke, who was injured last weekend in its loss to Duke. The Canes turned the ball over eight times in that game, but apart from their five penalties (for 22 yards), they played a clean game Saturday. Garcia passed for only 125 yards, but tailback Henry Parrish Jr. ran 24 times for a game-high 113 yards.

UVA, which defeated Georgia Tech 16-9 on Oct. 20, was trying to win back-to-back games for the first time this season, its first under Elliott.

“We had about four opportunities to really, really kind of separate in the game,” he said, “and we didn’t do it.”

Virginia hosts Pitt on Nov. 12 and then concludes its four-game homestand Nov. 19 by taking on Coastal Carolina.

“All we can do is just keep pushing forward,” Armstrong said. “We got another good opponent with UNC coming in, and [have to] get ready for that one.” 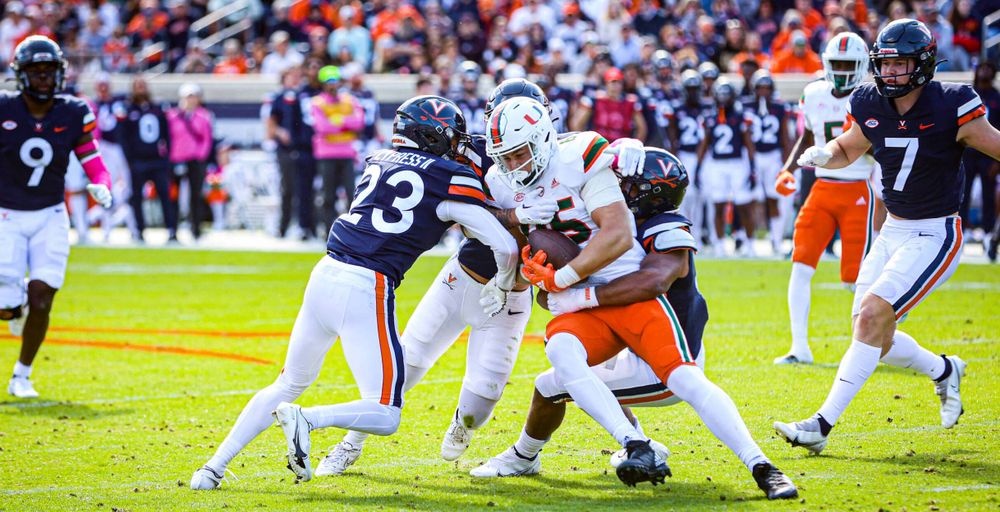 SOUND BITES: Virginia, which hosted Miami at Scott Stadium for the first time since 2018, now trails 12-8 in the series. Among the postgame comments Saturday afternoon:

* Elliott said: “Definitely not the outcome that we wanted, and the guys are going to be sick when they watch those four or five, maybe six plays that would have made a big difference in the game that we didn’t make.”

* Elliott on UVA’s snap infraction in the third OT: “Third-and-8 from the 8, that’s a tough call. Third-and-3, at least if you have a play that breaks down the quarterback can make you right. He has a chance to scramble, he has a chance to go get it, but to expect your quarterback on a play that breaks down to go scramble and get eight yards for a touchdown, it’s a tough situation.”

* Armstrong: “Positives, we battled. Negatives, we shouldn’t have been in overtime if we took care of our business.”

* Armstrong on his ankle: “It’s sore. It got rolled up on, we’ll just treat it throughout the week and be good to go next week.”

* Rudzinski on true freshman linebackers Stevie Bracey and Trey McDonald: “Depth is super important late in the season, and those guys earned the snaps. They’ve come on as freshmen, and they’re no longer freshmen for us here in this program. What they are is, they’re older guys now, for as many reps as they’ve gotten. We’re excited, and it’s a great opportunity for young guys to come in here, learn the system and be able to contribute.”

* Bettridge on his performance: “I just had to do my job. I kept thinking it was going to come down to a kick.”

* Clary on whether the offense’s problems frustrate UVA’s defensive players: “We don’t look at it like that. We just go out there, and any opportunity we get we just play to a certain standard … We’re encouraging those guys over there on offense, no matter what they’re doing. We don’t look down on them at all. We look to help them as much as possible. We’re going to continue to fight, continue to play defense and give them the opportunities.”

* Bettridge on bouncing back from the Georgia Tech game, in which he missed an extra point and two field goals: “I kind of put that game behind me. I didn’t want that to be what people thought of me. I worked hard. The whole team worked hard this week.”

* Hollins on not scoring a TD on his long reception: “It is a knee-slapper, but a big play is a big play. And I expected [the offense] to push it in, but obviously we didn’t. We have some things to work on. Executing in the red zone is going to be maybe high on our practice sheet this week. But it’s good to know what we can do. We know we’re an explosive offense. We can make a big play just like that. We just have to execute and punch it in at the end.”

* Kitchings: “We talk about competitive stamina and the guys have shown that. They battled for four quarters. They’ve been working hard, and l’d love for them to reap the benefits of the hard work out there today. They deserved to win and it’s unfortunate we didn’t get it for them.”