Lawson Shining On and Off Court

CHARLOTTESVILLE — Career possibilities abound for Kaydan Lawson, a third-year University of Virginia student whose interests are deep and varied.

“I call her my doctor-lawyer-coach, because every time we talk there’s something else,” Georgina Nembhard said, laughing.

Nembhard is the academic coordinator for the unbeaten UVA women’s basketball team, of which Lawson is an integral part. A 6-foot guard from Cleveland, Lawson is averaging 8.4 points and 4.2 rebounds per game and shooting 37.5 percent from 3-point range. Among Virginia’s players, only Sam Brunelle (17) has made more treys this season than Lawson (12).

Amaka Agugua-Hamilton, who’s in her first season as the Cavaliers’ head coach, said she occasionally has to push Lawson “a little bit, but it’s just because I believe so much in her talent, and I just think that she’s our X-factor. She’s so versatile on both sides of the ball, and when she’s playing aggressive and just locking in, she can do it all.”

Lawson shines in the classroom, too. She’s a biology major who hopes to become a heart surgeon after attending medical school.

“The heart’s interesting,” Lawson said after practice Tuesday at John Paul Jones Arena. “It does everything for you.”

Her classes this fall included biology, physics and “a religion course to get some general education requirements,” said Lawson, whose mother is a nurse. “But next semester, I’m definitely hitting it a lot harder. I have like three bio classes and a second physics, so it’s pretty chaotic.”

Such a course load would challenge a student with no extracurricular activities. For a Division I student-athlete, the burden could be overwhelming, but Lawson is pulling it off.

“I think one of my favorite things about working with Kaydan is she knows exactly what she wants to do,” Nembhard said, “and she acknowledges that it’s a hard track to be on, especially if you’re going to play great basketball and get great grades to get to her future endeavors. So I really love that she’s very realistic with it. When she comes into our meetings, I know she’s on top of it. She’s prepared, and she knows exactly what I’m going to ask.”

As Lawson gets deeper into her major, Nembhard said, she’ll have to take more labs, and balancing schoolwork and basketball will be more challenging. Lawson, who celebrated her 21st birthday this week, hopes to start shadowing doctors in the spring and summer of 2023.

“I love that when I see her she’s like, ‘Georgina, don’t worry.’ No matter how late the game is or when it is, when we have study hall on the road, she’s working on her physics problems [or other schoolwork]. As an academic coordinator, I love to see that she’s utilizing every opportunity to get better.” 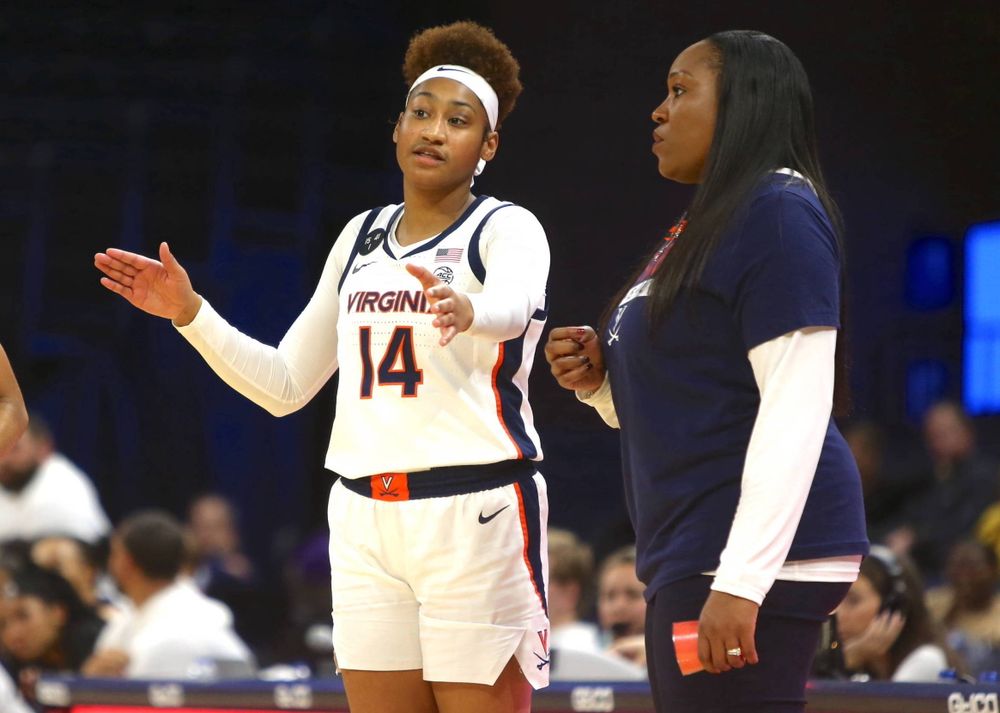 Lawson’s basketball career has taken off since Amaka Agugua-Hamilton arrived in March. As a sophomore in 2021-22, Lawson averaged 4.3 points and 4.4 rebounds for a UVA team that finished 5-22 overall and 2-14 in the ACC. Under Agugua-Hamilton, better known as “Coach Mox,” Virginia is 11-0 for the first time since 1990-91. Lawson has played a key role in the program’s revival.

🗣️HAPPY BIRTHDAY to the one who is always laughing at/with me😂😂!!! Even if it’s a serious moment I can count on you to make me smile☺️! @kaydan1411 I’m always going to push you because I know the sky is not even the limit for you! I’m super proud of you and your growth this pic.twitter.com/QO46i2hMgP

Her increased production, Kaydan Lawson said, is the result of “a combination of things. I think to start, there’s the coaching staff change, Coach Mox allows us to be a little bit more open, where everybody is contributing, it’s a true team effort.”

Agugua-Hamilton came to UVA from Missouri State, where she posted a 74-15 record in three seasons as head coach. From her first workout with Lawson, Agugua-Hamilton said, “I knew that she was a talented kid and needed to be pushed a little bit, but she has a lot in her bag and I want her to be able to use all of that. I didn’t want her to just be a driver or just a shooter or whatever. She can score at three levels, she can defend, and just instilling a little bit more confidence in her and in her game is where I’ve been focusing. I get on her sometimes because I just know how higher ceiling is, but she’s stepping up to the plate.”

Dani Lawson, who graduated from the University in 2021, has been watching closely. She’s a community engagement specialist for UVA’s police department, and she gets together regularly with her younger sister.

The biggest difference in Kaydan this season “is confidence,” Dani Lawson said. “With any basketball player, everything is about the mental, and I think that the coaching change has been tremendous for her, not only just basketball-wise, but personally I’ve seen a lot of growth. The system and the culture breed confidence. She’s talked about that all the time, how great Coach Mox is.

“When she does mess up or she misses a shot, Coach Mox says, ‘It’s OK, Kaydan. Shoot it again.’ So I just think the culture shift has been really good for her, and also the system. I know Coach Mox likes to play up-tempo, and then I also know that whatever you bring to the table and you show that can do is what you’re allowed to do. So she’s not put in this box of, ‘You’re just a shooter,’ or ‘You’re just a driver.’ She’s able to actually capitalize on and utilize all the skill set and the versatility she has.

“I’m super excited for her, and just watching her go through the process and really embrace the new coaching staff and the way that they embrace her, it’s really exciting.”

Kaydan Lawson said Agugua-Hamilton believes in “every player on the team, whether you play 30 minutes or you play no minutes, and I think that’s the big difference, and it gives you confidence. She instills it with all of us, and I think that’s why I’ve been able to be more receptive to it and give more for our team.”

The exam break ends this week at the University, and Lawson and her teammates will be back in action Sunday. At 2 p.m., UVA hosts Morgan State (7-3) at JPJ.

For the Wahoos to be undefeated 11 games into the season “is a big reversal,” Lawson said. “As a team, it’s crazy. You go from winning no games, kind of being down, and then having all this confidence in winning every game so far, and hopefully we continue that. But like Coach Mox always says, it starts with culture. She came in really hard and was like, ‘This is what we’re gonna do, this is how we need to act with each other,’ and we all bought into that.” 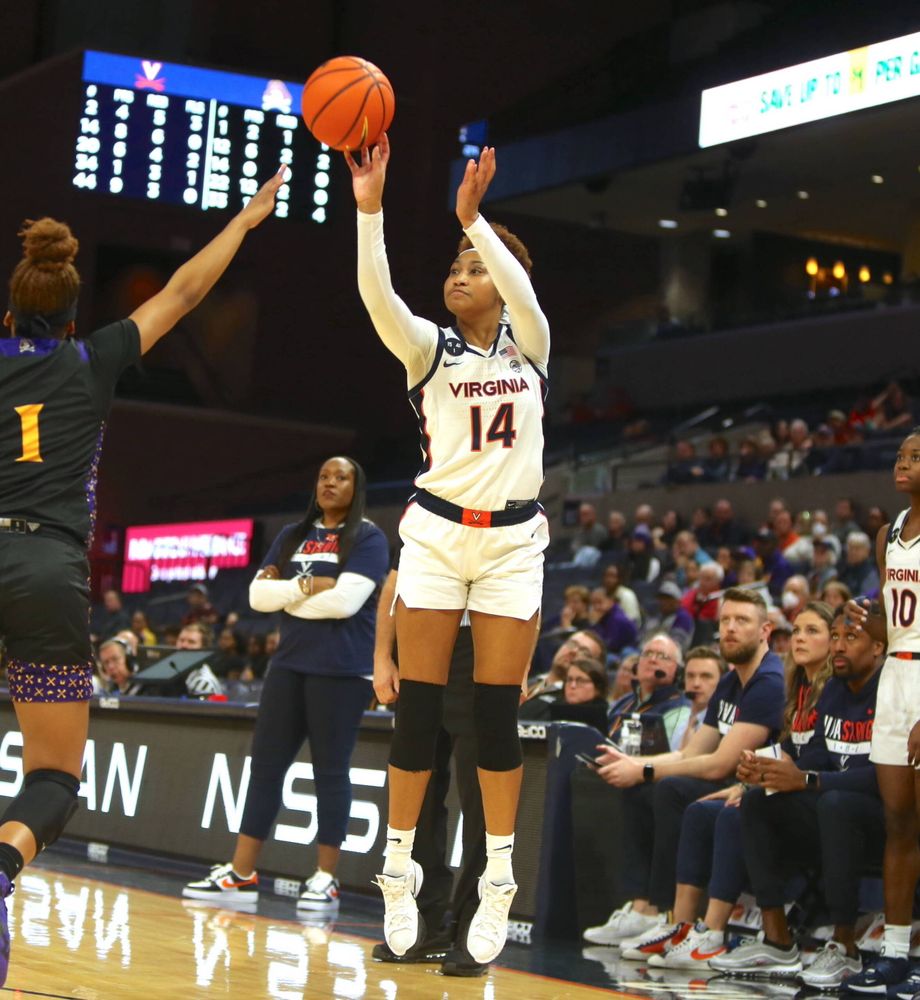