CHARLOTTESVILLE, Va. — London Clarkson had one foot out the door last spring when Amaka Agugua-Hamilton was hired as the University of Virginia’s head women’s basketball coach. Maybe both feet.

Clarkson’s first two seasons at UVA were trying. In 2020-21, amid the COVID-19 pandemic, the Cavaliers played only five games before canceling their season over concerns about safety. In 2021-22, Virginia finished 5-22, after which Tina Thompson was dismissed as head coach.

The thought of starting fresh in another program appealed to Clarkson, a 6-foot-2 power forward. Then she met Agugua-Hamilton, who came to UVA after three successful seasons at Missouri State.

“We had a great conversation,” Clarkson recalled this week, “and it just made me realize I really wanted to play for her. I went through my ups and downs here, but once Coach Mox and her staff got here, I really realized this is where I wanted to be.”

Agugua-Hamilton said she didn’t pressure Clarkson to stay. “I just wanted to talk to her, see what kind of kid she was, see what her story was, kind of meet her where she was.

“I think that was important to her, and she just wanted to get to know me a little bit and see what my vision was. She was on her way out, actually, but then she went back, thought about, prayed about it, and said, ‘I just really feel like I need you and this staff in my life.’ ”

The Wahoos are grateful for that decision. They don’t have much frontcourt depth, and Clarkson is a key reserve. Like 6-foot-2 Camryn Taylor, UVA’s best post player, Clarkson often gives away inches to opponents, but “both of them are athletic and agile, especially on the offensive end,” Agugua-Hamilton said.

“They can score in a variety of ways. Cam is becoming a three-level scorer, so it’s really difficult to guard her,” Agugua-Hamilton said. “You put a 6-5 [player] on her, she’s going to blow past them, or you put somebody smaller, she may be able to muscle them inside. Same thing with London. London’s always been a great low-post scorer from day one when we got here. Her moves are really good and she’s quick.”

Clarkson is averaging 5.3 points and 2.8 rebounds per game, and she’s second on the team in blocked shots, with 13.

“The one thing that she does a lot in practice and not so much in games is shoot it from the outside, especially 15 feet,” Agugua-Hamilton said. “So I want to see her continue to gain confidence there.”

UVA (14-4 overall, 3-4 ACC) closes a three-game homestand Thursday night when Florida State (16-4, 5-2) visits John Paul Jones Arena. Clarkson will be looking to build on her best game as a Cavalier. She scored a career-high 18 points Sunday afternoon to help Virginia rally with a 66-50 victory over Boston College.

More remarkable was her accuracy from the line. Clarkson came in shooting 46.4 percent (13 of 28) on free throws, but against BC she made all 14 of her attempts to set a program record for single-game efficiency on foul shots.

“That was crazy,” Clarkson said. “It just comes from preparation, because we practice free throws every single day and I’ve been making 50 a day.”

Even so, her performance from the line against BC was as unexpected as it was impressive. “I think it was a focus thing for me,” Clarkson said. “In practice, I was making them with no problem, but then I’d get in the game and kind of psych myself out.”

Agugua-Hamilton said: “We work on free throws a lot. I’m not a coach that believes in, Don’t mention it, don’t make it a mental thing. We’re going to work through it and try to simulate [game situations] the best we can, with pressure behind it, because that’s all it is. You get up there, you feel the pressure, and you gotta be able to relax and sink ‘em. So she did a great job.” 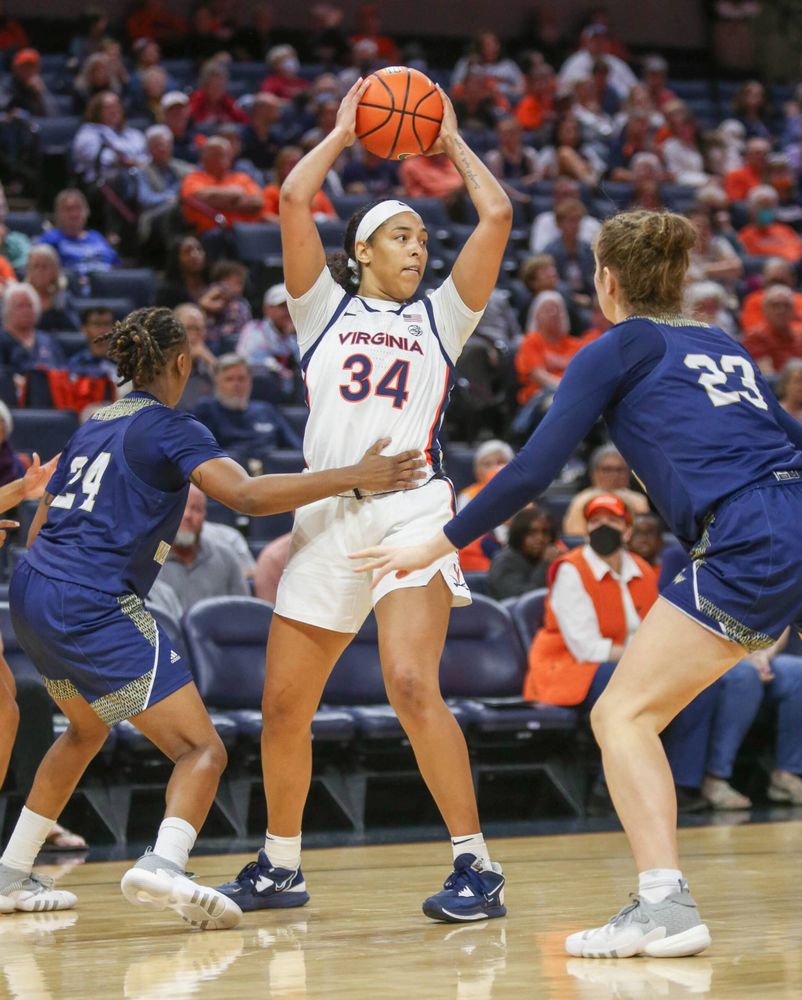 The victory over BC ended a stretch of three straight losses for UVA, all to teams ranked in the top 20 of the latest Associated Press poll. “We just really needed the win to get our momentum going,” Clarkson said.

Last Thursday night, Virginia led North Carolina by nine heading into the final quarter, only to unravel and end up losing 70-59 at JPJ.

“We kind of panicked at the end,” Agugua-Hamilton said. “We needed to be more poised. After that game, we watched the film and we talked about it, broke it down.”

Three days later, against Boston College, UVA led by 11 heading into the final quarter. “It was almost the exact same situation,” Agugua-Hamilton said. “It was crazy.”

There was no collapse this time. After the Cavaliers extended their lead to 21, the Eagles answered with an 8-0 run. “But everybody took a deep breath, we understood what we were looking for, and we just stuck to our principles, and we were able to overcome what had happened in the last game,” Agugua-Hamilton said.

Against Boston College, the Cavaliers were also missing guard Taylor Valladay, whom Agugua-Hamilton had suspended. That made the comeback victory all the more satisfying.

“Wins are great,” Agugua-Hamilton said, “but us being able to weather the storm and persevere through adversity is what made me happy about that game. We were resilient. We were short-handed, obviously, with Mir and Tay not being there. But then also we had been through three tough losses. So just being able to bounce back and play with the same sense of urgency was a big step in the right direction in our growth.”

Clarkson was a born and raised in Pflugerville, Texas, a suburb of Austin. Coming of high school, she passed up colleges in her home state and signed with Florida State, where she played in 25 games as a freshman in 2019-20.

FSU was not great fit for Clarkson, however, and she transferred to UVA before the 2020-21 academic year. The NCAA approved her request for immediate eligibility, and she was scheduled to make her UVA debut on Dec. 20, 2020, against Virginia Tech. But that game was canceled, and the Cavaliers’ season was shut down the next month before Clarkson appeared in any games.

All of them have now moved on, Clarkson said, but this still an important game for her. “I wasn’t the best player [as an FSU freshman], so I feel like I have a lot to prove, just for myself.”

Clarkson, a sociology major, is on track to earn her bachelor’s degree this spring. She plans to pursue a master’s at UVA in 2023-24 and compete as a graduate student next season.

Her first three seasons of college basketball “weren’t as fun as this year,” Clarkson said, “but that prepared me for this year in a lot of ways. Going through a lot of adversity, I think that’s really helped me to be more mature on and off the court.”

The mood around the program has changed, too. The Hoos are winning, and attendance continues to increase for their games at JPJ.

“It’s like everyone’s so excited to see us play,” Clarkson said. “We’re excited to come to practice. We love each other, so it’s more of a family atmosphere, I can say that.”