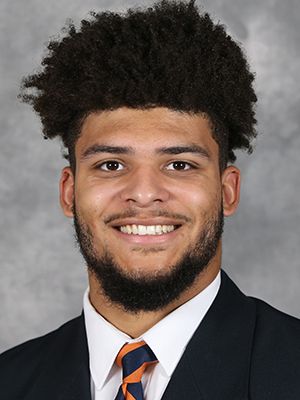 HONORS
2022: Nominated for the Allstate AFCA Good Works Team. 2021: One of six UVA student-athletes to receive the ACC Top VI Award annually given the most in terms of service to the University and Charlottesville communities … Presented with the UVA Distinguished Student-Athlete Scholarship Award, presented to a rising fourth year student-athlete who has distinguished themselves for their efforts within the athletics department and community at the Hoos Choice Awards … member of the 2021-22 ACC Academic Honor Roll.

HIGH SCHOOL AND PERSONAL
A January enrollee and will take part in 2019 spring practice … played safety and wide receiver at Stonewall Jackson High School for head coach Carroll Walker … named first-team all-region as an all-purpose defender … named first-team All-Cedar Run District as an all-purpose defender … as a senior in 2018 he posted 60 tackles and four interceptions, returning one for a touchdown … also recorded 1.5 sacks and blocked a punt … recorded six receptions for 140 yards and a touchdown … as a junior in 2017 posted 77 tackles, one interception, one sack and one blocked punt … named first-team all-district as a junior and second-team all-conference defense as a sophomore … also runs indoor and outdoor track … as a junior he qualified for the state indoor tournament in the 300m and outdoor in the 100m and 200m … a three-star recruit by ESPN.com, Rivals.com and 247sports.com … son of Jakia and Marvin Chalmers Jr. … father, Marvin, played wide receiver at Utah and Wake Forest … grandfather, Marvin Chalmers Sr. played shortstop at North Carolina A&T … major is Youth and Social Innovation with a minor in Drama… recipient of the 2022-23 Ken Newsome Endowed Football Scholarship.