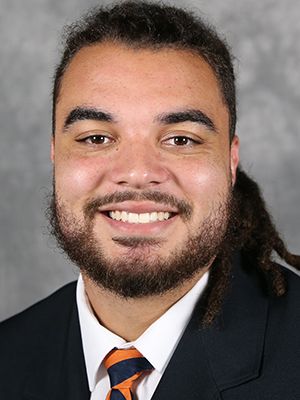 MIAMI (OHIO)
Career: As a RedHawk, earned All-Mid-American Conference honors the past three seasons … graduated with a degree in sport leadership and management. 2021: Was a first-team selection in 2021 when he totaled 53 tackles and a team-high 14 tackles for loss … had eight sacks as a senior, forced three fumbles and had one interception … helped Miami to a 27-14 victory against North Texas in the Frisco Football Classic … RedHawks’ defense held the Mean Green to 89 rushing yards, well below the team’s pre-bowl average of 246 rushing yards per game … named to the Academic All-MAC team for the 2021 season. 2020: Started in all three of Miami’s games and finished the abbreviated season with 16 tackles, 3.5 tackles for loss and 2.5 sacks … earned second-team All-MAC honors. 2019: Started all 14 games for the RedHawks and compiled 45 tackles, 14.5 tackles for loss and five sacks … awarded the team’s Defensive Power Player of the Year honor and named a MAC Distinguished Scholar Athlete and Academic All-MAC in addition be being second-team All-MAC. 2018: appeared in 10 games and finished the season with six tackles.

HIGH SCHOOL: Graduated from Covington Catholic High School … coached by Eddie Eviston … team captain … was team MVP as a junior … same season he was named a 5A all-star and was named the District 5 Player of the Year … led his team to a state championship as a senior … three-year letter-winner … was an All-Bluegrass team selection in 2017 … finished career with 210 tackles, 30 tackles for loss, 10 sacks and eight interceptions … pursuing a master’s degree in Higher Education.