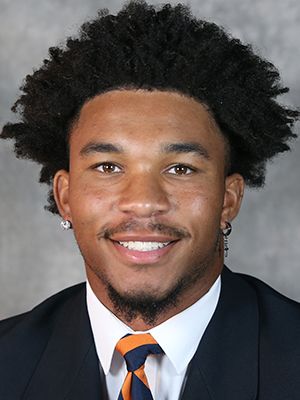 AT VIRGINIA
2021: Appeared in five games (Illinois, Duke, BYU, Notre Dame & Pitt),  and made one start at quarterback as a true freshman … made his first collegiate start on Nov. 13 against No. 7 Notre Dame … Became the first true freshman to start at quarterback for UVA since 1977, when Bryan Shumock started the first five games of the season …  threw for 196 yards against the Fighting Irish, the most ever by a UVA true freshman starting quarterback, eclipsing Scott Gardner’s 189 yard performance against North Carolina in 1972… one of 14 true freshmen to appear in 2021.

HIGH SCHOOL AND PERSONAL
Played quarterback at Benedictine College Prep for head coach Greg Lilly … high school team did not compete in fall of 2020 … earned Virginia Independent Schools Athletic Association (VISAA) all-state in 2019 … averaged 184 passing yards and 54 rushing yards per game as a junior … passed for 155 yards and rushed for two touchdowns in 14-6 win in the state championship game … missed part of his junior season due to a knee injury but returned for team’s playoff run … preseason all-state pick by MaxPreps heading into his senior season … tabbed by MaxPreps as the state of Virginia’s top overall athlete for all sports … rated as one of the state’s top 25 players by MaxPreps … played quarterback running back, wide receiver and defensive back in high school … outstanding two-sport athlete was named state Gatorade Player of the Year in baseball … is a right-handed pitcher, catcher and shortstop for baseball team whose fastball has been clocked at 93 MPH … named as one of the top 50 prep baseball players in the nation for the class of 2021 by MaxPreps … ranked as the No. 35 prospect by Baseball America for the class of 2021 … was 6-0 on the mound with 50 strikeouts and batted .388 with five home runs as a sophomore (last season completed) … helped Cadets to a 28-2 record and 2019 VISAA Division I state championship … he earned the save in the state title game … named to All-Metro teams for both football and baseball … also played on basketball at Benedictine … father, Pete, played basketball at Richmond, helping the Spiders to the Sweet 16 of the NCAA Tournament in 1988 … a three-star recruit by ESPN.com, Rivals.com and 247sports.com… major is undecided in UVA’s College of Arts and Sciences … recipient of the 2022-23 Richmond Alumni Scholarship.