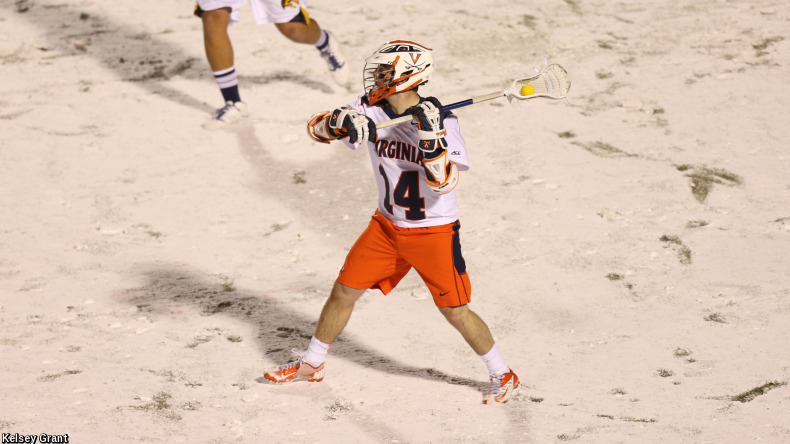 CHARLOTTESVILLE, Va – The No. 9 Virginia Cavaliers (2-0) overcame a snowstorm and an early three-goal deficit to defeat No. 16 Drexel (0-1) at KlÃ¶ckner Stadium, 14-10, on Valentine’s Day night.

“It was a little hard to tell exactly what we were able to do tactically out there tonight,” said Virginia men’s lacrosse head coach Dom Starsia. “I thought in the second half when conditions deteriorated like that it becomes more of an exercise of effort and desire, although I thought the second half was pretty clean overall.”

Drexel scored the game’s first three goals to take an early 3-0 lead. UVa fought back with a 6-1 run to take a 7-5 lead with 3:45 left in the second period. Ryan Tucker scored two goals during the run and Zed Williams capped the scoring with an unassisted goal.

Jules Raucci tallied a goal at 2:05 in the second quarter to bring Drexel within one goal, 7-6, but that was as close as the Dragons got to the Cavaliers. James Pannell scored on a Ryan Lukacovic helper with 26 seconds left that started a 5-1 Cavalier run that carried into the third quarter.

The snow came bellowing in during halftime, forcing a 15-minute delay to clear the lines and stock the field with yellow lacrosse balls.

The UVa run continued with the Cavaliers scoring the first four goals of the third quarter. Pannell score the first, followed by Owen Van Arsdale and then Jeff Kratky capped the run after winning the ensuing faceoff and streaking in for the goal, giving Virginia an 11-6 advantage at the 8:29 mark in the third quarter.

Drexel and Virginia traded two goals apiece over the next several minutes with the score standing at 14-8 with 12:33 left. Drexel managed back-to-back goals to cut the UVa advantage to four goals, 14-10, courtesy of Jake Gennosa and Ryan Belka. The two goals by Drexel capped the game’s scoring as UVa’s defense thwarted any Drexel comeback attempt.

Lukacovic, Pannell and Tucker all led UVa with four points, while Matt Barrett made 12 saves in the cage, four of which came in a late fourth-quarter barrage by the Dragons. Van Arsdale led all players with three goals.

“I thought offensively the attack came alive a little bit,” said Starsia. “Obviously we got more play from James [Pannell] and Ryan [Lukacovic] and Owen [Van Arsdale]. It helps balance us. The attackmen scoring is like having big men in basketball. You have to score those goals closest to the goal. We didn’t get that so much in the first game. I thought we were better tonight. It probably had a lot to do with us winning the game.”

Virginia returns to action on Sat., Feb. 21 at Rutgers. Faceoff is set for 1 p.m.