CHARLOTTESVILLE –– The McCue Center is much quieter than usual these days, but the University of Virginia football program’s pursuit of new talent hasn’t stopped. The Cavaliers’ coaches and recruiting staff continue to communicate with prospects by phone, by text message, by letter, on social media and on FaceTime––but not, as in years past, in person.

Before the COVID-19 pandemic upended life in the United States, the Wahoos planned to start spring practice this week. That’s been canceled, and no recruiting targets will be visiting UVA, or any other school, until after April 15 at the earliest. College coaches can’t recruit off-campus, either.

“This is kind of new territory, but really in in my office, nothing changes for us,” said Justin Anderson, UVA’s director of player personnel. “We’re still watching film, we’re still [communicating with] recruits.”

Instead of doing so from the football offices at the McCue Center, however, members of the recruiting staff are working remotely. So are head coach Bronco Mendenhall and his assistants.

“Whether we’re in the office or at our homes, it’s really the same for us,” Anderson said. “We’re on a computer, watching film. The only difference is the communication with coaches and my staff has to be at a higher level, because we’re not around each other. So there’s constant texting.”

Also, Anderson said, he’s asked his staffers “to send me a weekly plan of who they’re communicating with and how many guys they’re watching film on. We’ve got a few fun challenges we’re doing as a staff, to see who can find more players and those kind of things, to keep it kind of fun and competitive while we’re not in the office.” 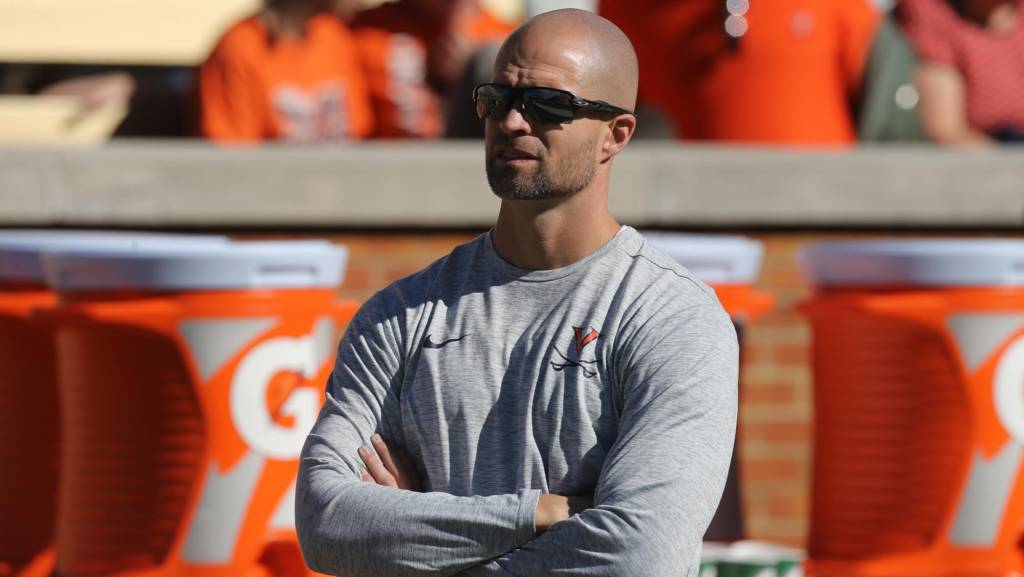 Butts and Garner joined the recruiting staff this year. Like Bradshaw, they played for Mendenhall at UVA. Mendenhall said last week that he likes having alumni looking for “players that will fit perfectly into our program. Who knows it better than someone that’s been in our program under myself as the coach?”

Virginia is still hoping to add at least two graduate transfers for the coming season, but the restrictions on recruiting are making that more difficult. The NCAA announced recently that on-campus and off-campus recruiting would be suspended for all Division I sports through at least April 15.

“This really is a challenge for the graduate transfers that are still looking for places,” Mendenhall said. “Spring ball is kind of the next window where players’ roles and place in their programs change a little bit, and so the grad transfer population is probably the one that’s been affected most immediately.”

Potential graduate transfers are “going to want to visit, and right now there are no visits,” Anderson said. “Some of these guys wanted to watch a spring practice, and now spring practice has been canceled. One of the strengths of our program is how we practice and how we develop our players, our team camaraderie. So with them not able to see that and watch us work out and watch us practice, I think it’s going to slow things down, and some of these grad transfers I’m sure were wanting to make decisions and take visits.

“So potentially it could be frustrating for them as well. Now it’s, When do I visit? We don’t know that right now. We know it has to be after April 15th. It presents a small problem, but one that you have to be a little bit more creative [to solve]. I think on top of recruiting, you’re communicating with your recruits more often than you would have had they been able to come and visit.”

Mendenhall said he devotes several hours a day to recruiting. He and his staff, Mendenhall said, are using all the technology that’s “within the rules the NCAA has given us. We’re maximizing those and then trying to create as many virtual things as possible for those who haven’t been able to visit Grounds, so they can see Grounds and we can be interactive with them.”

Under normal circumstances, high school juniors would be permitted to start taking official visits in early April. The NCAA might allow those to begin after April 15, Anderson said, “but I think a lot will depend on where we are nationwide with [the crisis], if they feel like they have it under control or not. If not, then I could see this going through the summer, and if that happens, then you’re going to look at official visits not happening or kids taking visits during the season.”