CHARLOTTESVILLE –– University of Virginia defensive end Nusi Malani underwent surgery on his left shoulder in December. About four months later, after he had regained mobility in that arm, Malani had another operation, this one on his right shoulder.

For a promising but raw player still adjusting to the college game, the timing was far from ideal. Malani, who’s from San Bruno, Calif., about 15 miles south of San Francisco, couldn’t take part in the Cavaliers’ winter strength and conditioning program and missed all of spring practice.

“Two shoulder surgeries, you literally can’t do anything [in the weight room],” said Shawn Griswold, UVA’s director of football development and performance. “Surgeries put you behind the 8-ball, but he’s done a nice job of getting back to where he can even play.”

It was summer before Malani could begin lifting weights again, and the Wahoos’ strength and conditioning staff had to modify some of his workouts. “But he’s done a really nice job of getting himself in shape and as strong as possible in a short amount of time,” Griswold said.

Before returning to Charlottesville for summer school, Malani said, he’d been training at home in San Bruno, but that didn’t fully prepare him for the intensity of the Cavaliers’ workouts.

“It was hard at first, trying to get really back in shape,” he said, “and then I caught up to speed and I was fine.”

The Cavaliers are seeking their fifth straight win in a series that dates back to 1892 and is known as “The South’s Oldest Rivalry.”

“I’m very excited,” Malani said of his opportunity. “I’m stepping into some new shoes, filling in a big gap. Ben and I have been working at it. We watch films together. There’s no hate between us. We want to see each other win. It’s just a friendly competition between us.” 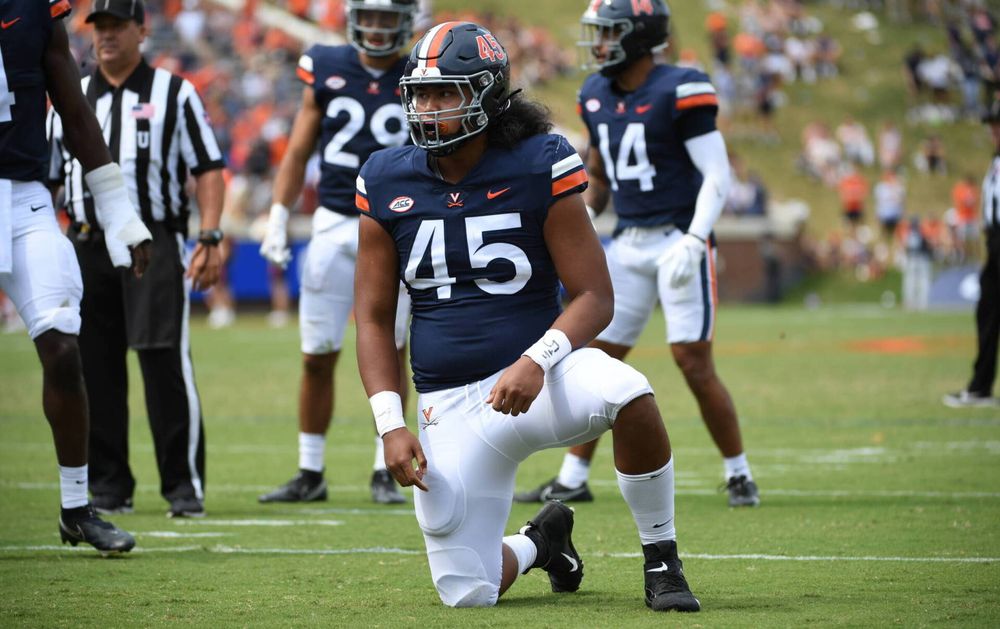 Malani, a graduate of Junipero Serra, a Catholic high school in the Bay Area, is one of more intriguing members of the recruiting class that joined head coach Bronco Mendenhall’s program in 2020. Listed at 6-foot-6, 275 pounds, Malani “has really, really strong upside because of his length, his size, his speed and his athleticism,” Mendenhall said.

His attitude is impressive, too.

“Nusi cares a lot, which I appreciate,” said Clint Sintim, who coaches Virginia’s defensive linemen. “He’s really just trying to grow and develop and get better. He’s working his way back into the rotation, and he’s doing some good things. I think when it’s all said and done, he’s going to have a chance to be a really good.”

As a true freshman in 2020, Malani was used primarily in passing situations. He appeared in seven games before missing the final two because of shoulder problems. After being sidelined for much of the offseason, Malani is “playing catch-up in all of the every-down situations to regain strength, size, technique and all the things [required for] playing the position on an every-down basis,” Mendenhall said.

No. 45’s performance against Illinois reflected his inexperience. “There’s glimpses and there’s positive [plays] and then there’s some inconsistency,” Mendenhall said.

Sintim noted that such “growing pains” are to be expected.

Not until signing day in February 2020 did Malani choose UVA. But he’d been leaning that way, he said this week. after talking to his family and praying about his decision.

He had multiple options closer to Northern California, including Washington State and Arizona, “but I don’t think what those schools had to offer was the same as UVA,” Malani said.

A visit from Mendenhall and assistant coach Vic So’oto didn’t hurt the Cavaliers’ chances. While they were in the Bay Area, they ate at Toast Deli, a restaurant owned by Malani’s uncle that specializes in Filipino sandwiches.

So’oto, who coached the defensive line, led the Hoos’ pursuit of Malani. “I remember Vic came out of nowhere one day and stayed in my drama class and watched me,” Malani said.

A week after Malani signed with UVA, however, So’oto departed for the University of Southern California. Malani didn’t reconsider his commitment.

“Even though Vic left, it didn’t really change my mind,” he said, “because I believed in what this program could do for me in the long run.”

Strict COVID-19 protocols were in place at UVA throughout Malani’s first year, and he didn’t have the college experience he’d expected. Still, he maintained a positive attitude.

“It was tough, coming all the way from the West Coast,” said Malani, who’s of Tongan and Filipino descent. “But I came here because I trusted Coach Mendenhall. He always preaches family first, last and always, and I feel that here, that it’s a family-based culture.” 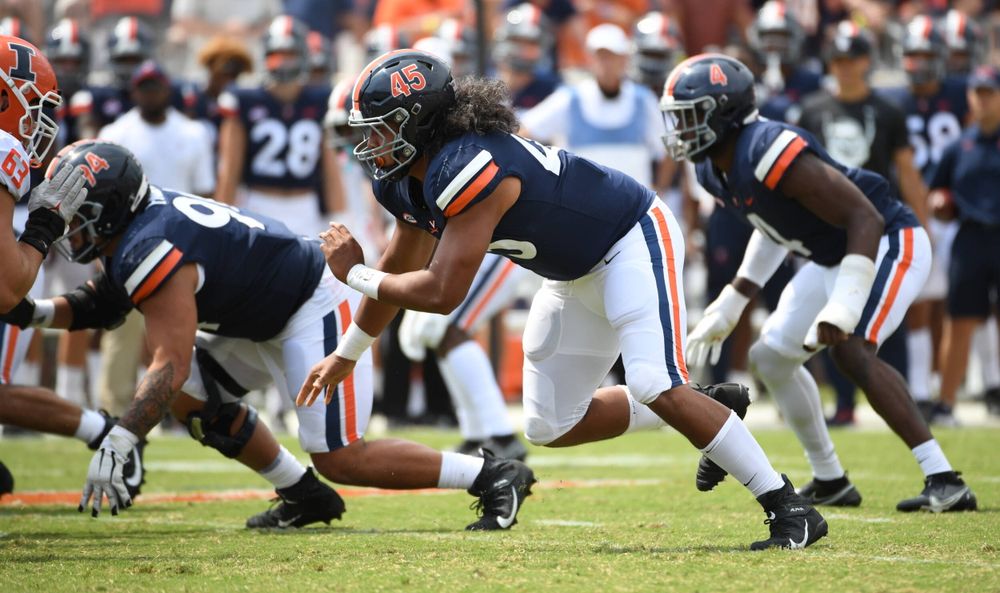 His injuries and the operations, both performed by Dr. Stephen Brockmeier, added more challenges to Malani’s daily life, but with the support of his teammates, coaches and family, he pushed through.

Malani, who lives with linebacker Sam Brady, was on the verge of reaching orange, the third-highest level in UVA’s strength and conditioning program, when his shoulder injuries sidelined him last season. He’s been making up for the time he lost.

“He’s done a really nice job of getting himself in shape and as strong as possible in a short amount of time,” Griswold said. “He’s still got a long way to go, and we’re still trying to work on that. I think he’ll be able to play at a higher level once we can continue to get him stronger. But the dude’s done a great job. He loves football and he loves being here, so he does a really good job with myself and my staff.”

“I think anytime you can get length and you couple that with athleticism, you’ve got something,” Sintim said, “and I think there’s a lot of young talent at that position right now, and there’s a lot of length. I think now it’s just getting them reps and then watching them develop.”