CHARLOTTESVILLE –– For Eleah Parker, academics drove her initial college decision. As an all-state center at Northside Christian Academy in Charlotte, N.C., the 6-foot-4 Parker receiving scholarship offers from many of the nation’s top basketball programs, but ended up choosing the University of Pennsylvania.

Back then, Thompson was an assistant coach at Texas, one of the schools Parker seriously considered before picking Penn. Now, in her fourth season at UVA, Thompson is finally getting an opportunity to work with Parker.

At Penn, from which she graduated last spring, Parker majored in cognitive science, with a concentration in neuroscience. She transferred after the 2020-21 academic year to Virginia, where she’s pursuing a master’s degree in public health in the School of Medicine.

With the COVID-19 pandemic ongoing, the Ivy League cancelled its 2020-21 basketball season, giving Parker another year of eligibility. She decided she wanted to compete at a higher level in hoops, and so she entered the transfer portal in early January.

“Then I just kind of went through the whole process,” said Parker, a three-time All-Ivy League selection. “I let schools reach out to me and then I kind of narrowed it down from there. I didn’t have any schools in mind yet. I just kind of wanted to see what the opportunities were.”

UVA offered everything she was looking for. Academics remained a “huge priority,” Parker said, “and I knew this school had great academics.”

It didn’t hurt that the Cavaliers had already landed another graduate transfer from the Ivy League, former Brown standout McKenna Dale. Not only did Parker and Dale play against each other on the court, then spent time together on a missions trip to Kenya in 2018.

“So I knew her coming in, and then we ended up being roommates here,” Parker said. “It’s been really cool.”

Dale, a 6-foot guard, committed to UVA first while Parker was still weighing her options, and they later exchanged messages.

“I was just asking her about her recruiting experience and her talks with the coaches and stuff,” Parker said, “because at that point I hadn’t really made a decision, but Virginia was still in my final schools. So it was helpful to get some information from her. And then once I did commit, it was comforting to know that I would be coming in with somebody from the same track and the same situation.”

“I loved my Penn experience,” she said. “The four years in Philly were some of the best years of my life. I just learned so much and met so many great people.”

The Quakers play their home games at the Palestra, one of college basketball’s cathedrals.

“It’s awesome,” Parker said. “You walk around the hallways in the Palestra and you see [photos of] all these great athletes on the walls. Knowing that so many great people played there, it’s such a historic place to be.”

“The resources that [student-athletes] have here and the facilities are so nice.,” Parker said. “They give us everything that we need to succeed. It’s crazy how many more resources are here from an athletic standpoint [than in the Ivy League]. I think that’s one of the biggest differences.” 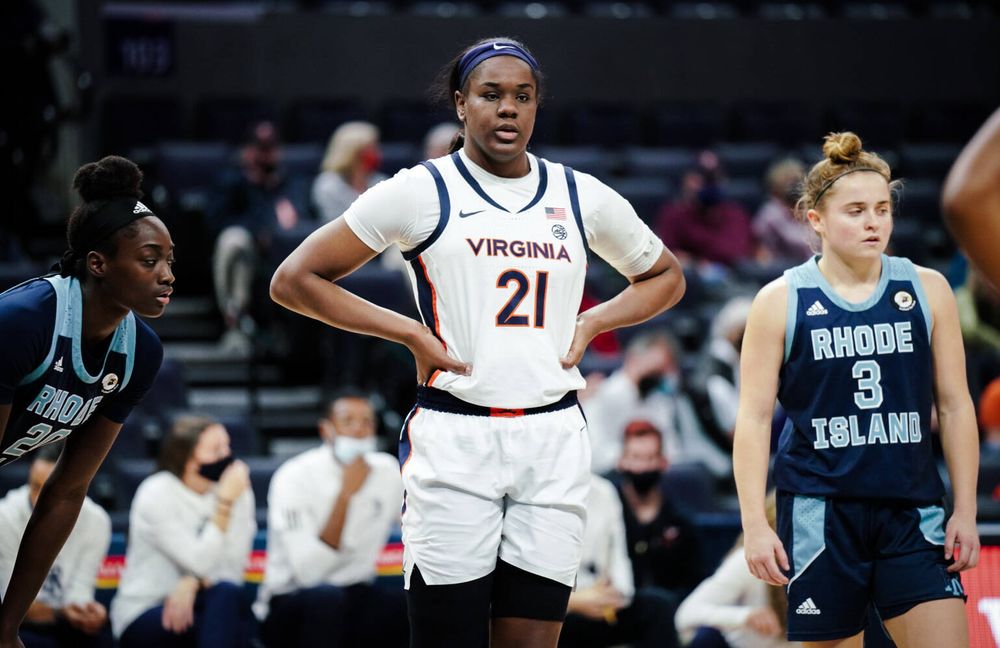 Parker’s classes at Penn in 2020-21 were all virtual, but she’s been back in class at UVA. That initially required an adjustment, Parker said, “just because we were so used to doing class from home. But it’s been really good to be in person, just for that face-to-face interaction with my professors and my classmates. It’s made a big difference.”

She’s in a two-year master’s program at UVA. Whether she finishes it in 2022-23 will depend in part on where things stand with her basketball career after this season, Parker said. “I could stay here and finish out my program right away. I’m also contemplating if I want to play after [college], whether it be overseas or who knows.”

Medical school also might be an option after she finishes her master’s. “I’m really interested in neurosurgery,” Parker said, “so anything like that is definitely open for my future.”

She’s followed the pandemic closely since it hit the United States in March 2020.

“I was the person watching the news every day, sitting on the couch,” Parker said. “They would have the briefings and I was up to date with it, because it was so novel and it stopped everybody’s tracks. Now  in my public health program, we take a lot of examples from the pandemic. When we talk about vaccines and different sorts of things, we draw from the pandemic, just because it’s so relevant.”

Hamstring and shoulder injuries have slowed her progress on the court at UVA. “She hasn’t had a lot of practices,” Thompson said, and that’s affected Parker’s fitness level.

“Once she gets into her sweet spot, she’s good,” Thompson said, “and she’s going to finish around the basket, and she has nice footwork and great feel, but conditioning is an issue for her at the moment.”

“She’s had moments where she’s been really good,” Thompson said, “but over time the conditioning is something that’s going to catch up with you a little bit, and we’re finding ways of just getting her slowly but surely into better condition.”

In Virginia’s most recent game, a 74-65 loss to Richmond at JPJ, Parker played less than a minute. The Spiders usually had at least four perimeter players on the court, Thompson said, and that “was a difficult game for her to play in, because of her conditioning, but also because of their size and movement. And she understood that. It made very good sense to her, and she was like, ‘OK. I really appreciate you making me aware in advance.’ She’s one of those type of young people that you don’t see all the time. She’s really mature and aware.”

Charlottesville is considerably closer to Charlotte than Philadelphia was, and Parker’s mother has been able to visit her several times. “It’s really nice that she’s not that far away,” Parker said. “So she’ll take a weekend trip up here and she’ll bring my dog, and it’s really cool.”

Parker has other reminders of home in Charlottesville. One of her sisters “actually moved to Virginia with me, so that’s been really cool to have her here,” Parker said.

She’s loved her UVA experience, Parker said, “especially in the summer, when it was just my team and some other teams here and we were just able to focus on basketball. It was so fun to be back into that competitive spirit and being able to work out with each other. I remember at Penn were trying to do virtual lifts and trying to stay connected that way, and then for a short time we were able to do some workouts in person.”

That was less than ideal, and being able to bond with her teammates at UVA delighted Parker. “We have a really close group,” she said, “so that’s been really fun.”